In this article, we analyse a High Court ruling on default judgment, which was not ‘directly covered by binding authority’, owing to a ‘unique’ set of facts.[i]

The individual facts of the case were as follows.

The claimant served particulars of claim on the defendants, relating to a £3 million personal injury claim. It was therefore necessary for the defendants to respond to the claim by filing a defence, within the period specified by CPR 15.4. 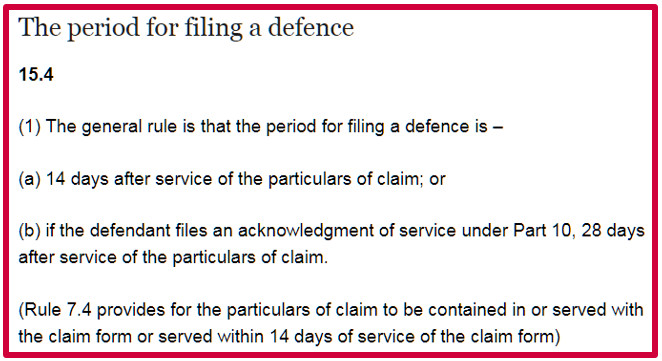 Before the period for filing ended, the defendants submitted an application (dated 29 September) on 30 September 2018, which sought a 1-month extension of time for filing the defence, as well as a 25-minute telephone hearing on the matter.

During the 2-month period between the defendants having submitted their initial application and the Court issuing said application, the parties’ agreed time for filing the defence expired (4 October) and, on 17 October, the claimant requested judgment in default of defence.

On the same day that the application was issued (26 November), a note was produced by the Court staff for Master McCloud, which made her aware that the defendants had had their application returned unissued, while the claimant had made an application to enter judgment.

However, between 21 December and 28 December, the defence was received at Court and, in the interim, Court staff had listed a hearing date for the defendants’ application. Nevertheless, the existence of the defence was not recorded on the Court computer until February 2019 and not at all recorded on file.

On 2 January 2019, the Master directed judgment in default, having received the Court staff’s note (dated 26 November) sometime (date unknown) before.

Judgment in default was entered on 15 January.

Although the facts of the case are somewhat confusing, it is unambiguous that when judgment in default was entered, the belated defence had, unbeknown to Master McCloud, been received by the court.

In these circumstances, was the ‘judgment in default’ fundamentally a ‘regular judgment’? And if so, could the judgment be set aside? 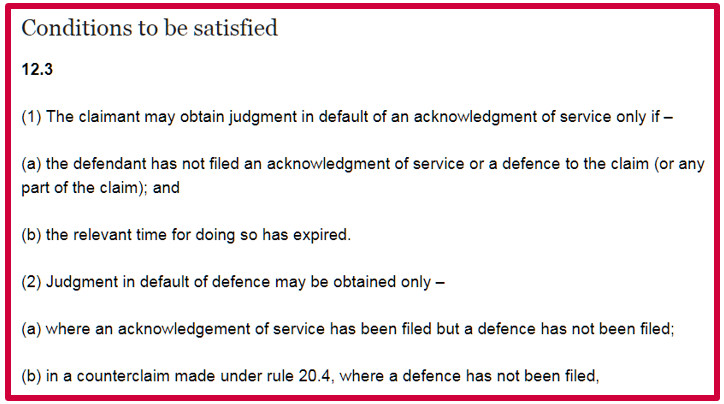 On this occasion, Master McCloud ruled that interpretation (1) should prevail.

Accordingly, she found in favour of the defendants. The court did not have jurisdiction to enter judgment and judgment was set aside. She reasoned, at paragraphs 23 and 24, that:

‘The language of CPR 12.3(1) naturally conveys the first meaning, and to say that the claimant may obtain judgment ‘only if the defendant has not filed’ naturally conveys that the court may not enter judgment if filing has taken place prior to entry of judgment. The way in which the rule is structured means that it is not relevant when the time for doing so expired, if the court finds (as is the case here) that a defence was filed. Further, I note, as did the court in Cunico, that CPR 3.10 provides that an error of procedure does not invalidate any step in the proceedings unless the court so orders. A late filed defence is in my judgment not by reason of its lateness alone fall to be treated as if not validly filed. A defence, within rule 12.3, does not have to be a timely defence.

... Default judgment can be a useful and proper device where claims are not disputed, but in my judgment an overly strict reading which would tend to shut out genuinely defended cases simply for lateness of defence would be disproportionate if it was relied on as a species of ‘encouragement’ to comply with court rules’.

In the judgment postscript, the Master informed the parties that the Civil Procedure Rule Committee (CPRC) may make changes to CPR 12.3 to clarify the position (potentially giving effect to judgment in Smith), but to-date, ‘no statutory instrument has been passed containing such a rule change’ and as such, a rule change cannot be guaranteed.

N.B. An appeal was ‘pre-empted’ at the outset and the judge granted permission for the claimant to do so.