In a mesothelioma case where there are multiple employers, all of which exposed a claimant to asbestos in the course of employment, liability is joint and several, meaning that any 1 employer is liable for the total loss.

This position is entrenched in law by s.3 of The Compensation Act 2006. Statute reversed the ruling in Barker v Corus (UK) plc [2006] UKHL 20, where lability was apportioned between negligent employers according to their risk contribution, and reinstated the principle first established in Fairchild v Glenhaven Funeral Services Ltd & others [2002] UKHL 22. 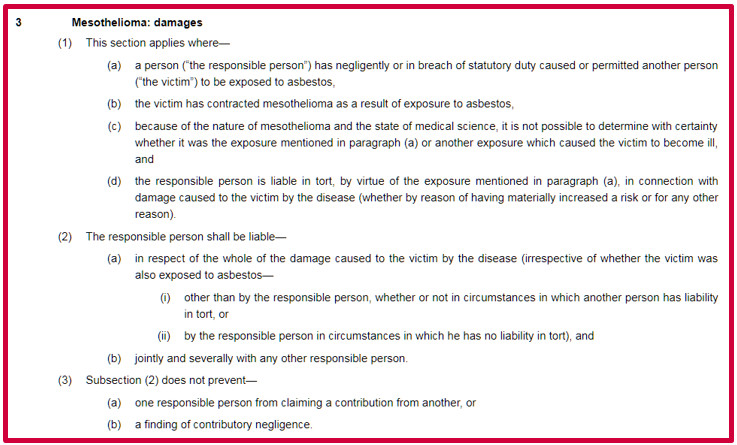 Equally, where an in insurer is on risk only for part of a relevant exposure period, Zurich Insurance PLC UK Branch v International Energy Group Limited [2015] UKSC 33 (reported in BC Disease News here) mirrored the Fairchild principle, as long as The Compensation Act applies (this was a Guernsey Law case, so Barker was still the relevant authority). Effectively, the insurer will be liable for the whole claim.

Of course, jointly and severally liable defendant employers and insurers may subsequently seek contributions from other negligent parties (other insurers, uninsured employers, etc.)

So, what is the position in a mesothelioma claim, where there is exposure to asbestos over multiple years of EL insurance that has been reinsured by multiple reinsurers, and the EL insurer settles?

In a practice known as ‘spiking’, a reinsured may present 100% of a mesothelioma claim to a specific year of reinsurance cover, affecting a single reinsurer.

Should reinsurers, however, be liable on a pro rata, time on risk basis? In other words, is ‘spiking’ mal-practice?

Until the case of Equitas Insurance Limited v MMI Limited [2019] EWCA Civ 718, there had been no authority on ‘Fairchild enclave’ in the context of reinsurance.

In Equitas, MMI (the reinsured) had attempted to ‘spike’ Equitas (the reinsurer) with its reinsurance claims by selecting a policy year of its choice.

Sitting as a judge-arbitrator, Flaux LJ initially found that MMI was entitled to ‘spike’ Equitas, i.e. Fairchild and IEG extended to the reinsurance level.

However, Equitas was granted leave to appeal to the Court of Appeal at an application hearing,[i] in 2018, on the basis that there remained ‘questions of general public importance’, casting ‘serious doubt’ over Flaux LJ’s Tribunal decision.

Firstly, the court found that there was ‘a seriously arguable case for treating the insurance and reinsurance positions differently’.

Secondly, if it is accepted that a reinsured party can choose how to allocate its losses to reinsurers, it may be under a duty of good faith to restrict the manner in which it exercises its freedom of choice. Allocating losses in line with Barker and the common law was the suggested approach.

Thirdly and finally, there had been no court guidance on how reinsurers might recoup contributions, but was likely not governed by Fairchild and should instead be subject to a different method of calculation. One reason for this was that ‘higher layers of reinsurance’ should always be furthest from the risk.

The Court of Appeal Ruling

At the Court of Appeal, in March 2019, the appeal was heard. Here, Males LJ, Patten LJ and Leggatt LJ addressed the issues highlighted by Lady Justice Gloster, at the application hearing for permission to appeal.

It allowed the appeal, unanimously finding in favour of Equitas, that a reinsured must present claims to its reinsurer(s) on a pro rata, time on risk basis.

‘... no principled distinction between insurance and reinsurance of the risk of an employer being held liable in tort for causing an employee to contract mesothelioma through exposure to asbestos, and the legal approach which applies to the settlement of mesothelioma claims at the insurance level ...’

Leggatt LJ considered that it was not compelled to resort to a solution that was ‘contrary to principle’ at the reinsurance level, simply because Lord Mance had done so in IEG. It appears that the mantra of ‘... once unorthodoxy has served its purpose, we should revert to orthodoxy’, was observed.

The purpose of unorthodoxy in the law, clearly, has been to ensure that mesothelioma victims are fully compensated, especially when an insured employer is insolvent. Without IEG, parliament may have been forced to amend The Compensation Act. One of the reasons for distinguishing the present case from IEG, therefore, was because:

‘[it] could not realistically be – suggested that, unless the insurer is allowed to recover its entire loss from those reinsurers who provided cover for any one year during the relevant period, there is a significant risk that the employee-victim will not be fully compensated’.

His Lordship also found, in agreement with the Males LJ and Patten LJ, that the proposed application of the doctrine of good faith was well-founded in this scenario – another reason to depart from Fairchild and IEG exception.

In respect of recoupment at the insurance level, Legatt LJ stated that it was a ‘relatively straightforward task’, as an insurer will only need to find out what insurance, if any, the employer had in other years of asbestos exposure and calculate each insurer’s (on uninsured employer’s) proportion of the risk.

By contrast, recoupment was ‘far more complex’ at the reinsurance level.

‘Where, as may well be the case, an insurer has multiple layers of excess of loss reinsurance in each relevant year, many different reinsurers may potentially be involved. Moreover, there may be no direct correspondence between the limits of layers of reinsurance placed in different years. A solution which avoids the need to calculate and settle what may be a large number of contribution and recoupment claims (for what may be quite small amounts of money) arising from any one loss has obvious practical advantages’.

In summary, he concluded, at paragraph 172, that:

‘... the courts need not and should not impose a complicated, burdensome and, to put it charitably, unconventional solution [i.e. Fairchild and IEG] on the reinsurance market when a simple, principled and orthodox solution is at hand [i.e. Barker]’.

MMI has until 30 April 2019 to seek permission to appeal to the Supreme Court. It is expected that MMI will seek to appeal.