In 2015 in the US, 4.3 million people developed non-Hodgkin lymphoma (NHL) and, with a 5-year relative survival rate of 71%, 231,400 individuals died as a result of it. Analysts have calculated the total value of ongoing Roundup litigation to be more than $5 billion.[i]

A fortnight ago (here), we reported that Edwin Hardeman,[ii] the 2nd of 11,200 claimants to argue that Monsanto-produced herbicide is associated with NHL development, had convinced a San Franciscan jury that Roundup was a ‘substantial factor’ in causing his cancer.

The trial immediately proceeded to a 2nd phase, wherein Mr. Hardeman’s legal representatives adduced evidence to support the assertion that Monsanto had attempted to manipulate regulators, scientists, public officials and the general public about the historic safety concerns surrounding its products.

Last week, District Judge Vince Chhabria delivered the jury verdict, which concluded that Roundup was defectively designed, that Monsanto failed to warn of the herbicide’s cancer risk and that the company acted negligently.[iii]

The pharmaceutical giant has pledged to continue to ‘vigorously defend’ Roundup and intends to appeal the court ruling:

‘We are disappointed with the jury’s decision, but this verdict does not change the weight of over four decades of extensive science and the conclusions of regulators worldwide that support the safety of our glyphosate-based herbicides and that they are not carcinogenic’.[v]

Bayer AG’s share price continued to fall to a low of ‎€59.98 on the day after the trial verdict.

We previously discussed that a further decline below the €60 mark could leave the company vulnerable to a potential takeover or breakup. Over the past week, however, Bayer’s Frankfurt- listed stock has shown signs of recovery, as demonstrated by the graph below. Currently, a change of corporate structure would seem unlikely. 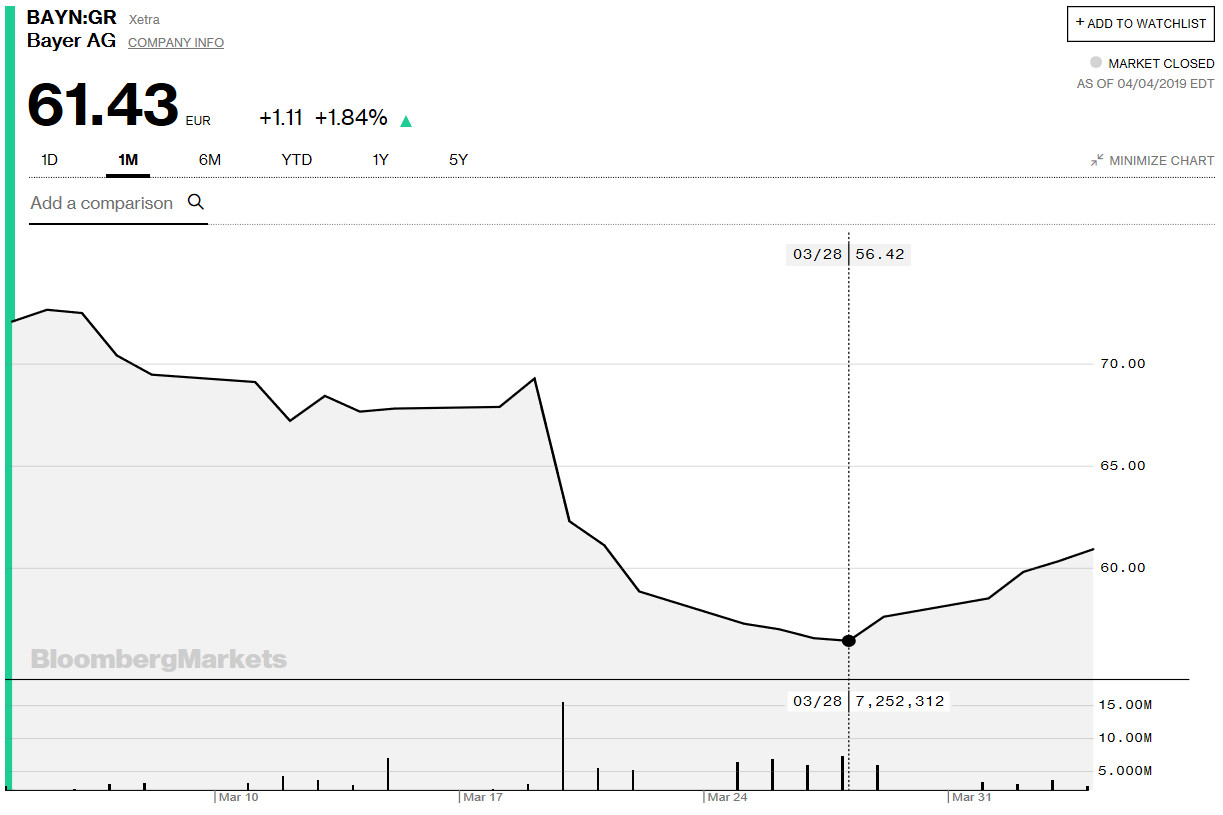