Specifically, we reported on the case of Edwin Hardeman, who was the 2nd person of 11,200 to argue, in a US court, that use of glyphosate-containing Roundup herbicide, manufactured by agrochemical producer, Monsanto, caused him to develop non-Hodgkin lymphoma (NHL).

Glyphosate is an active ingredient in more than 750 US products.

In the course of the month-long trial of liability, which started on 25 February 2019, Mr. Hardeman’s lawyers submitted that he had used Roundup on 300 separate occasions spread over 26 years, spraying more than 6,000 gallons during that period.[i]

Last week, closing arguments were made on the scientific link between glyphosate chemical and the lymphatic cancer type, in the 1st phase of the bifurcated trial.[ii]

District Judge Vince Chhabria asked the jury of 6 (formerly 9) to determine whether Roundup was a ‘substantial factor’ in causing Mr. Hardeman’s cancer.

Earlier this week, the San Franciscan jury found, in a unanimous verdict, that glyphosate use was a ‘substantial factor’.[iii]

In the wake of this decision, Bayer’s shares plummeted by more than 15% (from €69.96) on market opening in Frankfurt to reach a low of €60.49, as can be seen in Bayer AG’s stock value chart, below. Pharmaceutical giant, Bayer, took over Monsanto in June 2018 in a multi-billion dollar deal and, in doing so, also inherited the company’s liabilities. 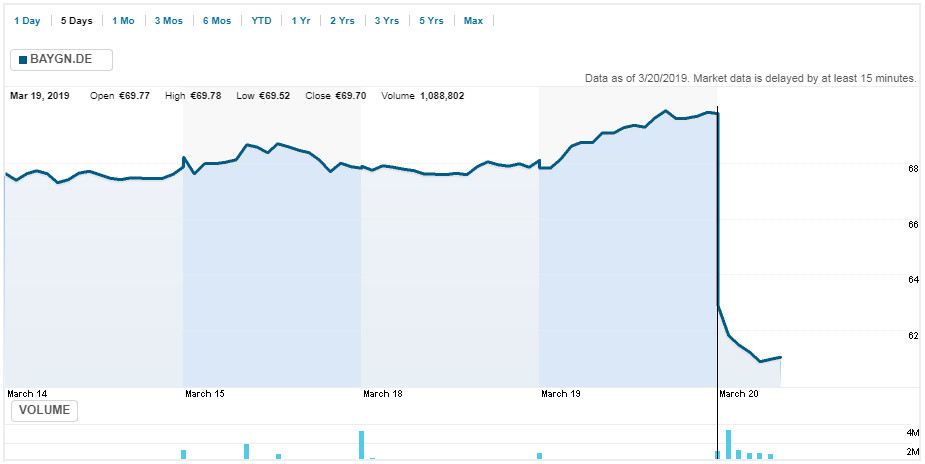 According to Baader Bank AG Analyst, Markus Mayer, a further decline below the €60 mark would leave the company vulnerable to a potential takeover or breakup. Billionaire shareholder, Paul Singer, has invested heavily in Bayer and is evaluating a proposal to break Bayer up into separate pharmaceutical and crop chemical companies.[iv]

On Wednesday, the trial proceeded to a 2nd stage, in which Mr. Hardeman’s lawyers have begun presenting evidence on the company’s alleged attempts to manipulate regulators, scientists, public officials and the general public about the historic safety concerns of Monsanto products.

Nevertheless, Bayer is ‘confident the evidence in phase two will show that Monsanto's conduct has been appropriate and the company should not be liable for Mr. Hardeman's cancer’.

We will keep a watchful eye on Mr. Hardeman’s case as the 2nd phase of trial continues.

In the interim, on 28 March, a new trial of liability will commence in Oakland, California, where Alberta and Alva Pilliod will build their case against Monsanto. [v]

The couple pleads that they regularly sprayed Roundup at their home from 1975 until 2011. In June 2011 and March 2015, respectively, Mr. and Mrs. Pilliod were diagnosed with NHL.