We last discussed the Kenyan Emergency Group Litigation proceedings in edition 232 (here), in which claimants were unsuccessful in arguing that ‘fear’ alone could amount to personal injury and benefit from s.33 judicial discretion after the limitation period had expired.

Recently, in edition 223 (here), we reported on the case of Fudge v F .G Minter Limited (2018), in which BC Legal were successful in defending a pleural thickening/asbestosis claim on s.33 of the Limitation Act 1980.

However, last week, judgment was handed down in the latest case of Kimathi & Ors v The Foreign And Commonwealth Office [2018] EWHC 2066 (QB), in which Stewart J considered whether to exercise his s.33 discretion in claims where submissions had been narrowed to trespass to the person, causing personal injury. Breach of duty had not been conceded by the defendant.

The causes of action accrued in the 1950’s and 1960’s. The claimants did not acknowledge that their date of knowledge was any later than the cause of action. Claims arising after 4 June 1954 were therefore time-barred, subject to s.33 judicial discretion. Test Claimant 34 (TC34) was the first of the test claimants to have his case considered, with the ruling having a potential impact on 40,000 plus claims.

Generally, it is equitable to allow an action to proceed if the claimant shows that their prejudice outweighs the prejudice to the defendant. Refusing to exercise discretion has the ultimate effect of taking away the claimant’s chance to establish their claim.

‘Given the nature and seriousness of the allegations, and the fact that is Group Litigation involving over 40,000 Claimants, if there can be a fair trial and it is otherwise equitable to allow the action to proceed, even if the amount of recovery in any individual case was very modest, that would not weigh against that claim proceeding’.

Stewart J cited the Master of the Rolls’ 13-point summary of principles and authorities governing s.33 application, in Chief Constable of Greater Manchester Police v Carroll [2017] EWCA Civ 1992. We reported on this case in edition 212 of BC Disease News (here): 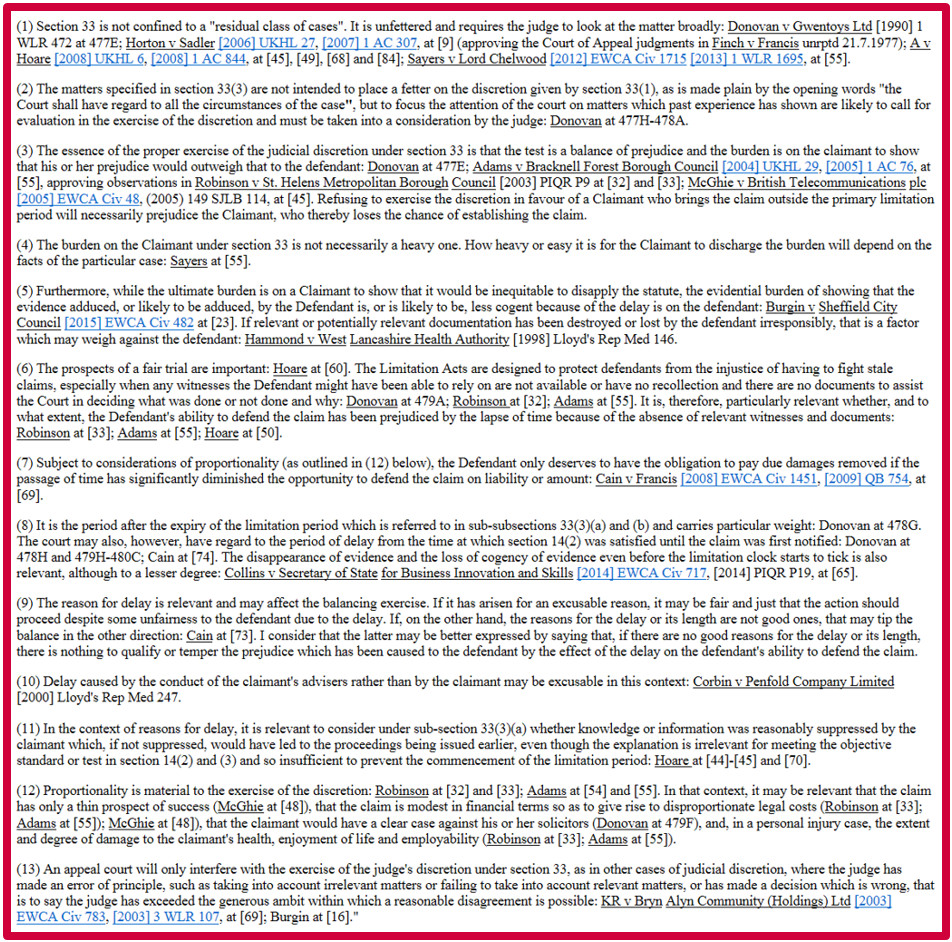 The judge considered each of the s.33(3) factors in turn:

a) Length and reasons for delay

TC34’s claim was brought approximately 56 years after limitation expired. This was ‘very substantial’. No evidence was given in his witness statement explaining the delay and ‘reasons for delay are not self-proving’. However, the judge agreed to take into account the claimant’s lack of education and sophistication, and lack of access to legal advice prior to 1963, when carrying out the s.33(1) balancing exercise.

The judge found that TC34’s memory would have been ‘fresher and therefore more reliable’ if the claim had been brought in time. TC34’s evidence ‘had been rendered significantly less cogent by the delay’. Evidencing his claim was now ‘essentially impossible’.

c) Conduct of the defendant post-cause of action

The defendant could not be criticised for its conduct post-dating the intimation of the claim, in 2012.

d) Disability of the claimant post-cause of action

There was no evidence of a lack of capacity under the Mental Capacity Act 2005.

TC34 did not act promptly and there was no evidence in support of the claimant acting reasonably in bringing the claim in 2014, as he did.

f) Steps taken by the claimant to obtain medical, legal or other expert advice

The burden was upon TC34 and he failed to show evidence about the steps taken prior to the involvement of his present solicitors.

After considering each factor, he conducted a balancing exercise of all the relevant circumstances outside of s.33(3).

TC34 failed to show that his prejudice would outweigh that of the defendant. The defendant had ‘no fair opportunity to investigate the core allegations’, compromising its ability to defend the claim against the test claimant.