‘Lost years’ claims arise where the claimant is still alive but has a reduced life expectancy as a result of injury. The claimant can then recover as a head of damage, the income that would have been received in the ‘lost years’. Where such a claim is advanced, the conventional way of determining the effect of the injury on expectation of life is as follows: (i) the court determines what the claimant’s expectation of life would have been but for the injury; (ii) then determines what the claimant’s expectation of life is having regard to the effect of the injury; (iii) assesses the difference between the two, which constitutes the ‘lost years’. We will discuss these types of claims in a future feature in this series.

A fatal claim arises where the injured person has died and the claim is pursued by the estate and/or dependant(s) of the deceased. These claims are governed entirely under the statutory provisions of the Fatal Accidents Act 1976 (FAA) and the Law Reform (Miscellaneous Provisions) Act 1934 (LRMPA). There are 2 distinct parts to fatal claims.

The LRMPA allows an action to be brought on behalf of the estate - commonly referred to as Law Reform Act or Estate Claims. They generally cover;

Examples of some heads of loss which may make up the claim for damages for the deceased’s past loss up to the date of death include;

These actions, if brought in isolation and not alongside an FAA claim are typically brought by the personal representatives of the estate where the deceased had no dependants or where the dependants have no valid dependency claim under the FAA.

The FAA allows an action to be brought on behalf of the dependants of the deceased, commonly known as the Dependency Claim.

The typical heads of loss under the FAA include:

The diagram below provides an overview of the different types of fatal claims which can be brought and which heads of loss fit under each statutory regime: 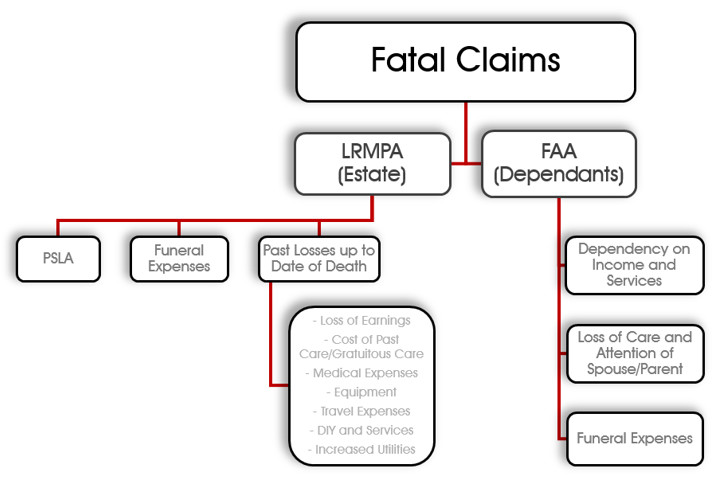 So who can be a ‘dependant’ under the FAA?

In order to bring a dependency claim, the dependant must satisfy two criteria, firstly that they fall within one of the categories of dependant set out in s.1(3) of the 1976 Act as follows: 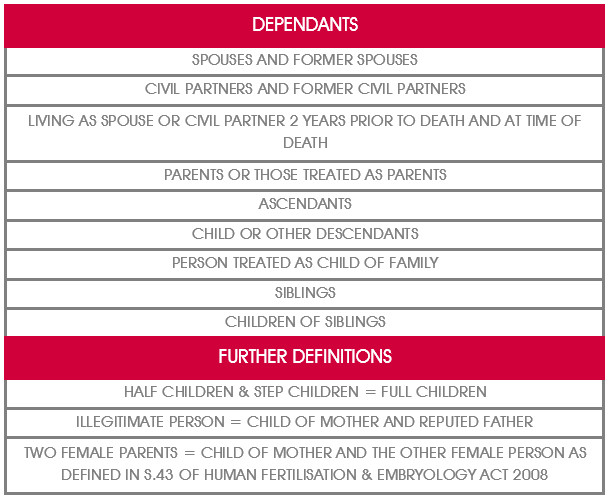 Secondly, the dependant must have had a reasonable expectation of financial benefit from the deceased i.e. just because a person is defined as a dependant within the statutory meaning of the FAA does not automatically mean they have a claim. Particular care must be taken in relation to claims by former spouses, civil partners and by cohabitees and it is these amongst others that we will provide further analysis of in this article.

Ex-spouses and ex-civil partners have dependency rights under the Fatal Accidents Act 1976 regardless of whether or not the spouses were living together as husband or wife. Indeed, spouses living in separate houses are eligible as are divorced persons. It is clear then that there is no requirement of ‘same roof’ or ‘living together as husband or wife’ in this category. What is the situation where a married couple separate and intend to reconcile at the time of death?

There have been recent developments in this area with the decision of Hayes v South East Coast Ambulance Service NHS Foundation Trust,[i]whereby a former wife and husband separated and were divorced four years before the husband’s death. However reconciliation was on the horizon and dependency damages were awarded on the basis of an 80% chance of reconciliation. Therefore dependency damages were awarded on the basis of 80% of the full amount. The test was outlined at paragraph 146 where the judge held that he ‘must decide whether or not there was a significant chance (which may be less than 50%) as opposed to merely speculative possibility that the couple would reconcile. If the first stage is passed, then I must assess the chances of reconciliation in percentage terms and adjust the award accordingly’. The important point of law to take from this case is that damages for dependency were not awarded on the balance of probabilities but on the basis of the percentage chances of reconciliation. [ii]

Interestingly, in Shephard v Post Office,[iii] the deceased had divorced his spouse and she then remarried. However, she then returned to live with the deceased before his death. In this instance the ex-spouse was still eligible under the FAA.

As with many other areas of the law, the rules regarding the status of cohabitees in relation to their right to claim under the FAA require slightly more consideration than spouses or civil partners. The rules under the FAA apply to both heterosexual and same sex couples and are that the claimant must establish that they had been living with the deceased;

It is often difficult to place human relationships into convenient tick box scenarios and satisfying these criteria under the FAA is no exception. Partly due to the vagueness of the term ‘living as husband and wife’ which the Act uses.  The courts have had to grapple with various different factual circumstances in order to determine whether these requirements are satisfied for the purposes of the FAA, for example, if a couple temporarily separate during the 2 years prior to the deceased’s death will they still satisfy this requirement and if not how long does the separation need to be for the couple to no longer be deemed cohabitees on this ground? This has been considered in several cases of which the following points can be deduced;

A somewhat more tenuous argument may be that a claimant is not eligible under this category as they were sleeping in separate rooms to the deceased at the time of death and therefore were not ‘living as husband and wife’. It has been said that this category of dependants are subject to the ‘same roof’ rule, although questions have been raised about the rationale behind this approach and whether it is actually a ‘sex tie’ rule in that it is based on the assumption of sex under the same roof.[vii] It could be said that a more suitable approach would be to have eligibility criterion based on love and support so as to not exclude couples such as those that have been together for 20 years but choose to sleep in separate bedrooms later in life, or an unmarried couple with children who buy a new house and they live separately whilst the house is renovated.

There is no ‘same roof’ or ‘two year cohabitation’ rule to be applied to this category and all parents are eligible as are grandparents by virtue of the inclusion of ‘ascendant’ in the statutory definition. It should be remembered that anyone that the deceased treated as a parent is also eligible i.e. foster or adoptive parents. However, parents-in-law are not expressly included which is somewhat contrary to the ‘marriage tie’ rule which runs throughout the FAA, however, the category for parents-in-law was created by virtue of s.1(5) which treats marriage and civil partnership as ‘blood ties’ and so parents-in-law are treated as parents of the deceased. This is the same approach for sisters-in-law and brothers-in-law and uncles and aunts from the deceased’s spouse’s side of the family.

This is a rather complicated method of making parents-in-law eligible under the FAA – suggestions for simplification and reform are outlined below.

A child can be of any age and as outlined in the table above and by virtue of s.1(5), eligible children expressly include illegitimate children. Gordan Exall,[viii] notes that whilst it is not difficult to ascertain the mother of an illegitimate child, the Act refers only to the child being treated as the child of the ‘reputed father’, which he acknowledges is somewhat unclear but suggests that the important issue may be whether the deceased was the ‘reputed’, rather than the actual, father.

Any children ‘of the family’ who are not the deceased’s blood children e.g. nieces or nephews, are also included but only if the deceased was married to the living claimant parent since s.1(5)(a) states that any relationship of  ‘marriage or civil partnership’ shall be treated as a relationship of consanguinity – this is discussed in further detail below when addressing the issue of those that are not eligible.

In a similar fashion to cohabitees the criterion in this category may result in loved-ones being excluded from eligibility. For example, adopted children are not specifically mentioned, neither are foster children and children who are blood tied to the deceased’s unmarried cohabitee partner. It is surely a problem that ex-spouses may be eligible but some categories of genuinely loved children may not. What other categories of persons are not eligible under the FAA?

The Law Commission in their report entitled Claims for Wrongful Death,[ix] discussed the issue of whether the list of persons entitled to claim under the FAA was too restrictive. In doing so they highlighted the following categories of individuals that are not eligible;

Following these long standing recommendation for reform, the Civil Law Reform Bill 2010 proposed radical reform to widen the class of dependants to include any person who was financially dependent on the deceased before his or her death. However, this was shelved by the Coalition Government in January 2011. It has been noted that considering the government’s recent attempts at limiting claims in other areas, it is unlikely that reforms which would open up the scope of dependency claims to a wider class of claimants will be introduced in the foreseeable future. [x]

In this feature we have distinguished lost years claims from fatal claims and identified the qualifying criteria that must be met in order to bring a claim under the relevant statutory provisions. In particular we considered who qualifies as a dependant for a dependency claim under the FAA.

On initial examination the statutory definition of dependant under the FAA would seem to be quite inclusive and to reflect modern day family units. However, as outlined there have been calls to make the list of dependants less restrictive. This article has outlined some of the more complex definitions and hopefully established that particular care must be taken in relation to claims by former spouses and civil partners and claims by cohabitees. It should also be remembered that the fact that a person comes within the statutory definition, does not mean that they are a dependant, they must also show a loss of a benefit.

In next week’s feature we will look again at fatal claims and in particular claims brought under the LRMPA for pain, suffering and loss of amenity.