The New NIHL Fixed Scheme - Will It Save You Money?

In edition 199 of BC Disease News (here), we reported that the Civil Justice Council’s NIHL Working Party had published its final report entitled, ‘Fixed Costs in Noise Induced Hearing Loss Claims’ and proposed a fixed fee scheme for handling NIHL claims. In this feature, we consider whether insurers will achieve a lower indemnity spend under a fixed fee scheme compared to current handling regimes.

But first, let’s remind ourselves of the proposed fixed fee regime which would apply to more ‘straightforward’ NIHL claims. The Working Party report states that these claims ‘are still the majority’. As such, the proposed matrix of costs is restricted to cases which would remain within the fast track (both on value and on complexity), cases which are considered less suitable for fixed costs, or are more complex than the norm, for example:

The scheme is underpinned by single audiometry. For reasons we have extensively reported on in editions 2 (here) and 160 (here) of BC Disease News, this will inevitably result in claimants without NIHL being paid compensation, even where the audiometry is performed under acceptable conditions. Based on our most recent analysis of over 20,000 claimant audiograms c. 95% are diagnostic of NIHL when there is a simplistic application of the CLB[i] / LCB[ii] Guidelines.

The costs under the scheme

There are 4 different procedural stages defined in the Working Party’s report, as follows:

2A = A claim that settles before the claimant’s solicitor has prepared papers to issue proceedings.

2B = A claims that settles after the claimant’s solicitor has prepared papers to issue proceedings.

3A = A claim that settles before the claimant’s solicitor has prepared papers to issue proceedings.

3B = A claim that settles after the claimant’s solicitor has prepared papers to issue proceedings.

The fixed costs are determined by the stage at which a claim concludes and also the number of defendants involved-with an additional £500 for each defendant successfully pursued as shown in the table below:

All these fees are exclusive of VAT and any reasonable disbursements.

In addition, restoration fees of £1,280 (exclusive of VAT) per restored defendant successfully pursued will be paid, plus any reasonably incurred disbursements but not counsel’s fees.

Below is the proposed matrix of fixed recoverable costs for litigated NIHL claims:

The £4000 figure for pre-issue in this matrix refers to the pre-litigation fee in the table above for the category ‘3B’ i.e. a single defendant where the claimant solicitor has prepared papers to issue proceedings (which of course they would have if this litigated matrix is being used). As per the pre-litigation matrix, £500 is added per extra defendant.

Once the claim is issued, post litigation costs for a single defendant (excluding VAT and reasonable disbursements) are as follows:

For each additional defendant successfully pursued a 20% uplift is applied per defendant at each stage.

The figures in the post-litigation matrix are cumulative so you can see that once the claim is issued, but not yet allocated, a single defendant claim would have a fixed fee of £5,650. We have broken down each stage, along with the uplift calculations for extra defendants below:

If the claim is then allocated but not yet listed, another £1,656 can be added, which represents the £7,306 figure.

In addition to the above and as previously stated, a fee of £1,280 would be recoverable for restoring a company to the register.

The Working Party did not reach full agreement on the trial advocacy fee, however, Jackson recommended that these be the same as those proposed for Band 4 claims in the new ‘intermediate’ track i.e. £1,380 so this can be added to the final fee of £9,187.

Each stage in the post-litigation fixed fee matrix also has the 20% figure which would need to be added for each extra defendant.

Where there is more than one defendant, the applicable fees for pre and post-litigation can become fairly complicated and difficult to navigate. As such we have created an easy to use tool which will calculate the fees available depending on each particular scenario - please contact us if you would like a copy.

For all scenarios, we assume typical spend as shown in the table below. It is assumed that currently most claims involve relatively low level NIHL with average damages of £5,000[iii].

Therefore, of the 900 claims repudiated, 865 are pre-litigation and 35 are litigated.

Of the claims paid, 85 are pre-litigation and 15 are litigated-see figure of claim outcomes below. 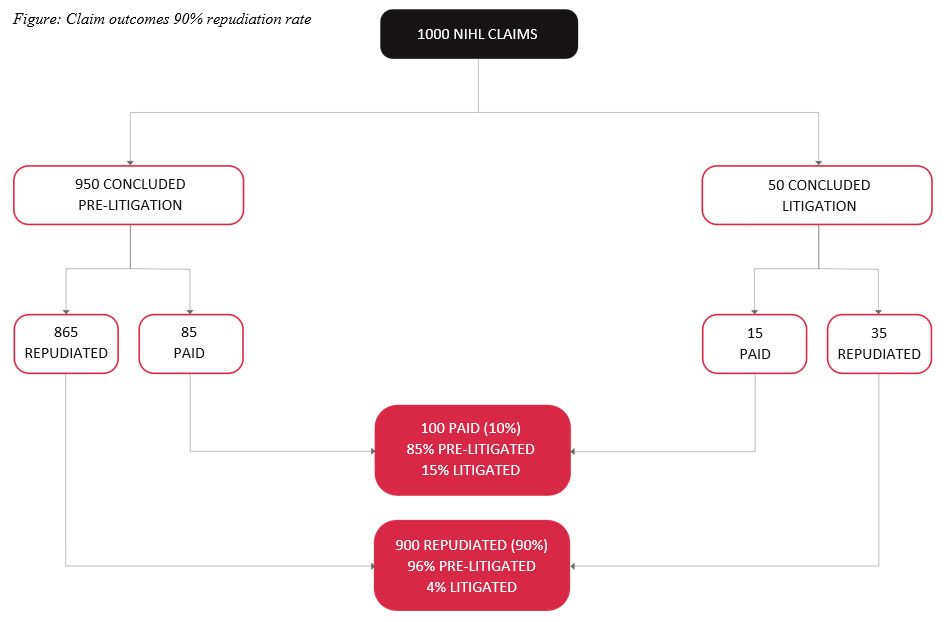 Applying the above assumed spend per claim, then the overall spend is £2,590,000 as shown in the figure below. 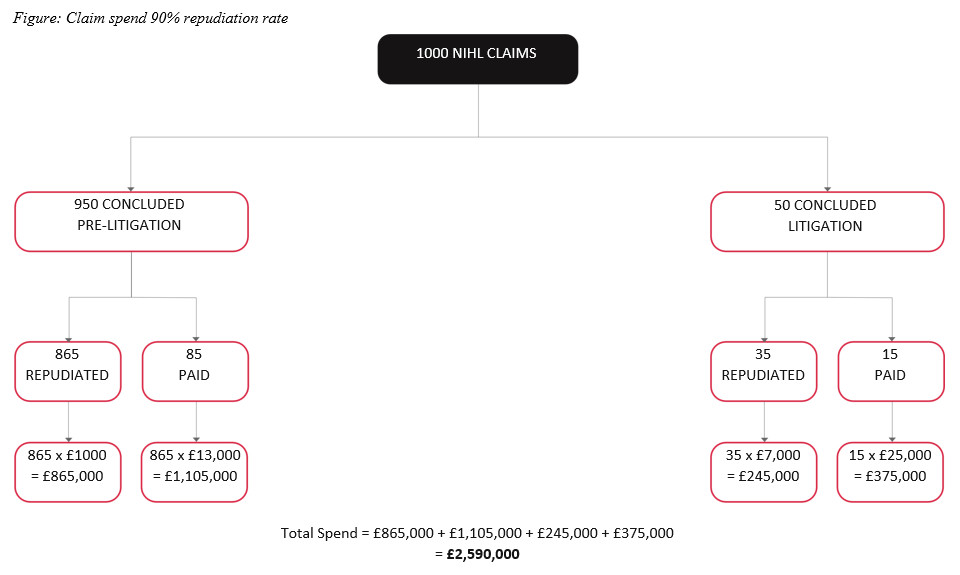 With each 10% increase in the repudiation rate the overall spend decreases by an average of £1,165,200 - see the figure below.

The dynamic of claims handling may well change under the fixed fee scheme and over time some insurers may adopt a no fault liability approach, similar to that under the historic ‘GMB-Iron Trades Scheme’. In our first scenario below we assume 80% of claims paid and 20% repudiated. We again assume: 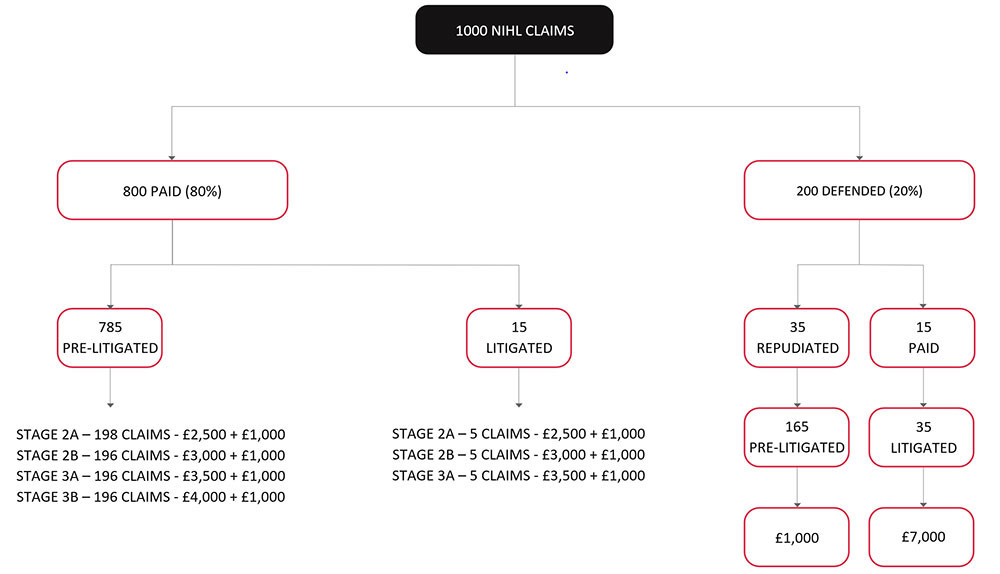 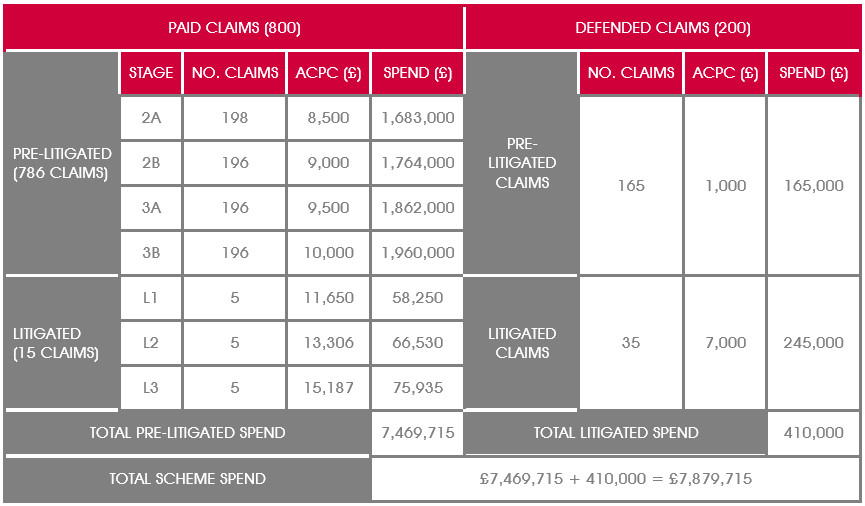 So, with 80% of claims paid, the total indemnity spend is just under £7.9 million.

This is the equivalent spend which would be reached with a c. 45% repudiation rate under current handling.

Any current repudiation rates above 45% means that indemnity spend would increase under the new scheme.

In the table below we show how spends would differ by repudiation rates. 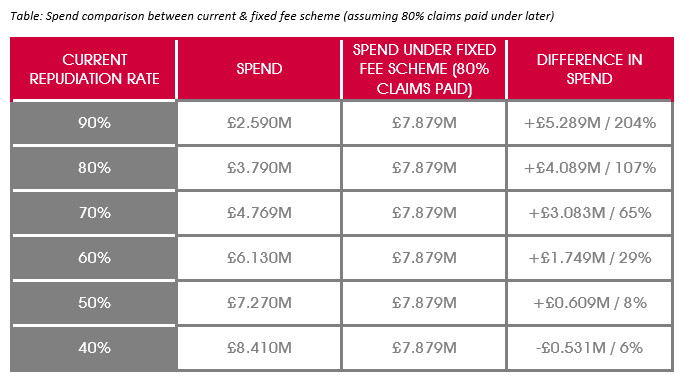 Making your own assessment on spend

We have prepared an easy to use calculator to compare your current claims spend against predicted spend under the new fixed fee scheme. You will need to know:

- Your % leakage into litigation

You can assume different repudiation rates under the fixed fee scheme and assess spend outcomes. For access to the calculator please contact This email address is being protected from spambots. You need JavaScript enabled to view it.

We will shortly publish a full White Paper on the scheme which outlines its potential risks on damages, claims volumes and costs.

[iii] Our analysis of c. 10,000 audiograms on first introduction of the LCB Guidelines indicated 75% of claims with NIHL of 10 dB or less applying the LCB full method to determine disability.