No Interplay between Applications to Set Aside Default Judgment and the Denton Test: C v Richmond Borough Council (High Court, 6 May 2022)

To summarise the issues at play in this asbestos-related disease action, questions were asked as to whether a defendant’s application to set aside default judgment engages the regime for relief from sanctions and triggers application of the Denton criteria. Further questions were then asked as to how the strength of a defence weighs against procedural non-compliance (delay and inaction), alongside other factors, e.g. the overriding objective and any adverse impact on the claimant.

The background facts of the case were as follows.

The claimant asserted that he had been negligently exposed (via both ambient and secondary exposure) to material quantities of asbestos dust as a teenager in the 1980s, when he was employed part-time at Richmond Ice Rink. The alleged source of exposure was poorly lagged pipework.

In his late 40s, he was diagnosed with mesothelioma and subsequently commenced a personal injury claim against a number of defendants, including Richmond Borough Council (the defendant). Proceedings against other defendants, which were allegedly liable for other periods of exposure, were either discontinued or stayed.

The total value of claim was in excess of £6 million, as he was relatively young and was held out to be a successful entrepreneur.

Pre-action, the local authority engaged with the claim.

However, after proceedings were served, in June 2021, it inexplicably failed to instruct solicitors or inform insurers in a timely fashion. Accordingly, default judgment was obtained against the defendant, in July 2021.

It was not until the scheduled date for assessment of damages (5 May 2022) that the defendant’s application to set aside judgment was listed – the hearing in question.

Whilst the defendant conceded that there had been ‘inexcusable’ and ‘unexplained’ delay in the making of the application, which could be detrimental to its application [see ‘promptness’ requirement in CPR 13.3(2)], it considered that it had a real prospect of successfully defending the claim [CPR 13.3(1)(a)] because it had not owned, occupied or managed the site of exposure (the ice rink), nor had it employed the claimant. Evidence from publicly available sources was adduced in support of this contention, which was unchallenged by evidence adduced by the claimant. Further, the defendant averred that any prejudice to the claimant could be mitigated by an award of adverse costs and/or by evidence on commission (life expectancy permitting). 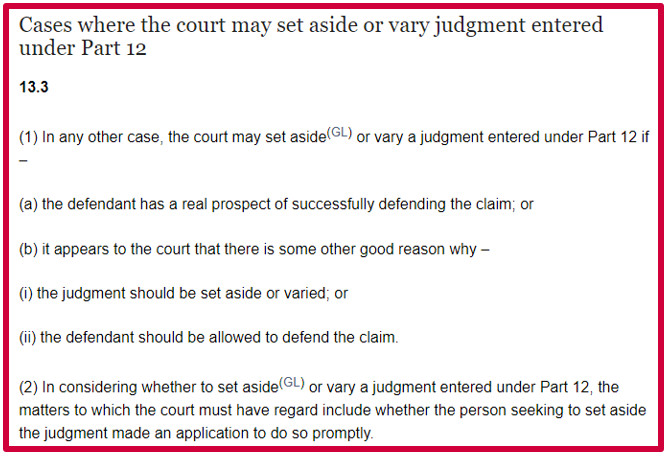 The parties disagreed on the scope of the test for determining whether judgment entered under Part 12 of the CPR should be set aside.

Besides satisfying the requirements laid out in CPR 13.3, the claimant argued that the defendant would also need to obtain relief from sanctions, engaging the three-stage test in Denton v TH White Ltd [2014] EWCA Civ 906:

At the May hearing, sitting Deputy High Court Judge, Mr. Dias QC, firstly determined that use of the procedural machinery of CPR 13.3 is not to be treated as an application for relief from sanctions.

The availability of an order setting aside judgment in default is a ‘self-contained procedure’ and it cannot be intended that an application satisfies CPR 13.3, but is ultimately refused on the grounds that it falls short of additional/different requirements prescribed by the Denton test.

Faced with parallel lines of authority on this issue, the preferred direction was the one taken by Andrew Baker J, in Cunico Resources NV & Ors v Daskalakis & Anor [2018] EWHC 3382 (Comm), and Lord Dyson, in Attorney General v Matthews (Trinidad and Tobago) [2011] UKPC 38.

Having ascertained the ‘relevant test’, Mr. Dias QC went on to grant the defendant’s application.

The purpose of the court’s discretionary power to set aside was not to punish a party for incompetence, but to prevent injustice through exercise of the overriding objective – see Hussain v Birmingham City Council & Ors [2005] EWCA Civ 1570.

In the extant case, the judge was wary of conducting a mini trial or coming to a definitive decision.

Nevertheless, the court acknowledged the ‘significant amount’ of ‘cogent’, ‘historical’ evidence supporting the defendant’s position that it owed no duty in respect of the claimant’s tortious employment and was the wrong defendant.

Even though the nine-month delay in the run-up to making the application had been a ‘significant’ and ‘inexcusable’ factor, this was a claim of high value and of great importance to local authority taxpayers.

Upon reflection of all the relevant factors, it was fair to all parties to allow the default judgment to be set aside:

‘The purpose of the civil litigation system was the just disposal of claims after trial and it would be wrong to impose a liability of millions of pounds on a local authority where, despite the delay, there was sufficient plausible material indicating that it had no liability; that would be to punish the local authority for the delay: Riley v Reddish LLP [2019] considered’.

Permission to appeal was refused. However, the claimant intends to seek leave from the Court of Appeal as a matter of urgency.

N.B. the judgment transcript is awaited and the claim is subject to an anonymity order.

[i] David Platt QC, ‘Applications to set aside judgment are not to be seen as relief from sanction cases. The Denton test does not apply’ (12 May 2022 Crown Office Chambers) <https://www.crownofficechambers.com/2022/05/12/applications-to-set-aside-judgment-are-not-to-be-seen-as-relief-from-sanction-cases-the-denton-test-does-not-apply/> accessed 25 May 2022.