In edition 312 of BC Disease News (here), we examined the High Court’s ruling in Griffiths v TUI UK Ltd [2020] EWHC 2268 (QB), in which Mr. Justice Spencer allowed an appeal, overturning Her Honour Judge Truman’s findings at the 1st instance trial.

The only available evidence to assist the trial judge on the issue of causation had been a ‘minimalist’ report, submitted by consultant microbiologist, Professor Pennington, on behalf of the claimant. This was ‘truly “uncontroverted”’ evidence, in that the defendant, despite denying the claim in full, missed the opportunity to challenge the opposition by proffering its own evidence from a nominated gastroenterologist and microbiologist.

Upon consideration of the fact that ‘a number of’ the assertions made by Professor Pennington were seen to be ‘bare ipse dixit’ (translated from Latin as ‘a dogmatic and unproven statement’), the report was initially rejected.

On appeal, the High Court had to assess the circumstances where uncontradicted expert evidence may be departed from by a judge and, if so, whether the present case fell under one such circumstance.

In a similar vain, Spencer J concluded that once an expert report is truly uncontroverted, the court is not entitled to subject it to the same kind of analysis or criticism ‘as if it was evaluating a controverted or contested report, where it had to decide the weight of the report in order to decide whether it was to be preferred to other, controverting evidence …’

He went on to state that the only role of the court that does not ‘fall away’ when presented with uncontroverted evidence is the need to ensure that a ‘minimum standard’ of ‘substantial compliance’ with paragraph 3 of Practice Direction (PD) 35 is satisfied. 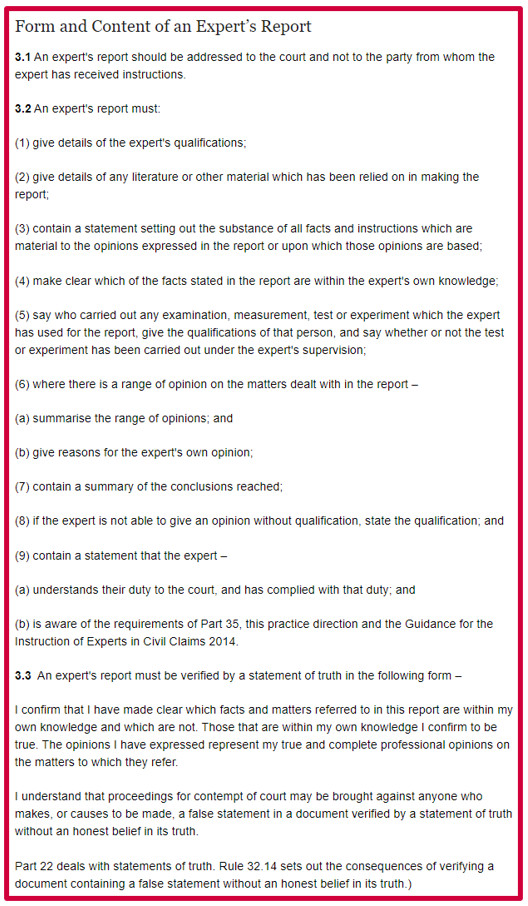 Whilst Professor Pennington’s report failed to specify reasons that led to the conclusions summarised and, under certain conditions, this could have ‘diminished’ the weight attached to it, the High Court judge emphasised that no part of PD 35 requires an expert to give his/her reasons.

In the absence of controverting evidence, cross-examination or joint statement, he subsequently found that the court ‘must assume’ that the expert’s conclusions were reasoned and that those reasons were unchallenged.

Spencer J doubted that any report in substantial compliance with PD 35 could ever justifiably be characterised ‘a mere ipse dixit’ and Griffiths was no exception. There were ‘serious’ and potentially ‘embarrassing’ deficiencies, but the expert ‘went a long way towards substantiating his opinion’.

Earlier this month, however, the Court of Appeal dealt with the defendant’s subsequent appeal and overturned the High Court ruling by majority, thus reinstating the original decision of HHJ Truman.

Giving lead judgment, Lady Justice Asplin (with whom Lord Justice Nugee agreed) commented that there was ‘no rule that an expert’s report which is uncontroverted and which complies with CPR PD 35 cannot be impugned in submissions and ultimately rejected by the judge’:

‘It all depends upon all of the circumstances of the case, the nature of the report itself and the purpose for which it is being used in the claim … a rigid test based solely upon whether the requirements of CPR PD 35 have been met is inappropriate’.

If the court’s function was simply to ‘rubber stamp’ evidence, it would be bound by ‘uncontroverted’ reports even where conclusions are ‘only supported by nonsense’. Thus, ‘the court is not a rubber stamp’.

For the defendant to have reserved its criticisms of the expert’s evidence until closing submissions was a ‘high-risk strategy’, but there was ‘nothing impermissible about it’.

Asplin LJ went on to conclude that, ‘as a matter of common sense … if the court is to be satisfied … that the evidence is sufficient to enable the claimant to satisfy the burden of proof in relation to causation, some chain of reasoning supporting the conclusion is necessary, even if it is short’.

Dissenting, Lord Justice Bean viewed the case through the eyes of the claimant, who could only be ‘wondering what he did wrong’:

‘He instructed a leading firm of personal injury solicitors, who in turn instructed an eminent microbiologist whose integrity has not been questioned. Mr Griffiths and his wife gave evidence at the trial, were cross-examined, and were found by the judge to be entirely honest witnesses. The eminent expert gave his opinion that on the balance of probabilities Mr Griffiths' illness was caused by the consumption of contaminated food or fluid supplied by the hotel. No contrary evidence was disclosed or called, and the expert was not cross-examined. Yet the Claimant lost his case’.

Although the Court of Appeal judge acknowledged that Spencer J had erred in holding that uncontroverted evidence diminishes the role of the court and is effectively automatically binding, he conceded that a judge should be ‘generally bound to accept the evidence of an expert if it is not controverted by other expert or factual evidence and the opposing party could have cross-examined the expert on the point but chose for tactical reasons not to do so’.

He perceived this to be an unfair trial, akin to ‘litigation by ambush’.

Despite a lack of judicial unanimity, the defendant’s appeal was allowed.