However, at paragraph 6.1 of the Guidelines, the authors acknowledge that:

‘Substantial amounts of NIHL can be caused in a minority of persons exposed to < 100 dB(A) NIL; that is, in those who are more than averagely susceptible’.

As such, claimants are also permitted to prove a lower NIL in the range of 90-99 dB(A) [requirement R2(b)], alongside a higher audiometric bulge/notch, exceeding 20 dB [requirement R3(b)].

At present, the 2 mechanisms through which NIHL can be identified [i.e. R1 + R2(a) + R3(a) OR R1 + R2(b) + R3(b)] makes for diagnostic criteria that could be adequately described as binary. Testament to this is the fact that a person exposed to 99 dB(A) NIL still has to demonstrate high-frequency notching or bulging of at least 20 dB, even though their lifetime exposure is much closer to 100 dB(A) [the R2(a) threshold] than 90 dB(A) [the R2(b) threshold].

In July, Christopher Lowe, of Ropewalk Chambers, issued an article focusing on the emergence of ‘novel battle grounds’ in an ‘ever-decreasing pool of viable NIHL claims’.[i]

In particular, he observed that claimants are increasingly applying a so-called ‘sliding-scale’ approach to R2 and R3, thus challenging the orthodoxy of R1 + R2(a) + R3(a) AND R1 + R2(b) + R3(b) when proving medical causation. 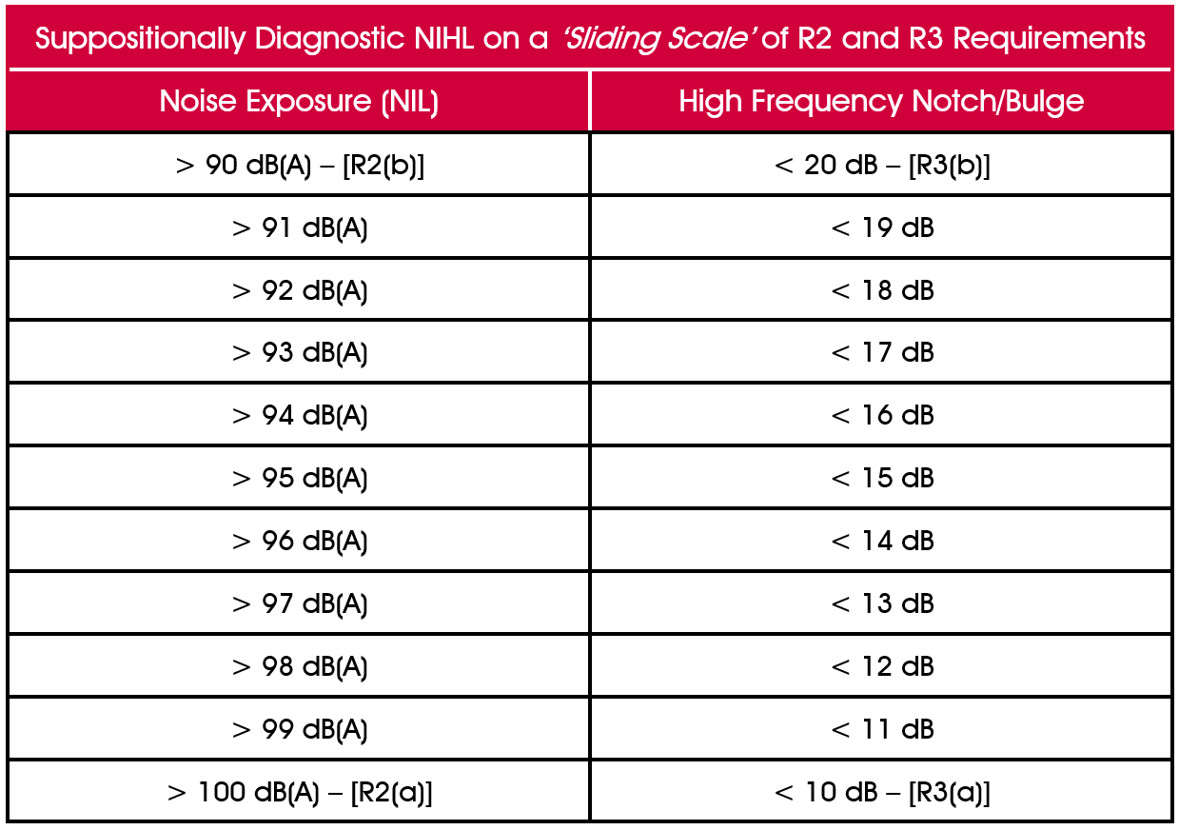 Although one could argue that there is some mathematical logic in this approach, to accept it would be to undermine the rationale for having 2 distinct methods of fulfilling conditions R2 and R3.

To date, Mr. Lowe confesses that he has not been present at a trial where the Court has found in the claimant’s favour on this issue. That being said, he warns that defendants ‘must be alive to the issue at an early stage in any case in which the argument is likely to be raised’.

Various fronts on which judges have rejected the ‘sliding scale’ include:

For now then, the ‘sliding scale’ approach is nothing more than a ‘superficially attractive’ idea. More now than ever before, defendants should be incentivised to obtain their own medical evidence and ask appropriate Part 35 questions of opposing experts, in order to prevent ‘novel battle grounds’ from becoming established ones.