A claimant, who contracted mesothelioma in 2018, following occupational exposure in the 1970s, issues proceedings against his former employer defendants, in 2019. Directions are agreed, a listed CMC is vacated and judgment is entered in favour of the claimant on the issue of liability, with an assessment of damages hearing set to take place in due course. Quantum is agreed before the hearing begins, by way of a draft Tomlin order, with the only residual issue being the costs of the hearing itself. At the hearing, the judge refuses the defendants’ application for their costs, with the Tomlin order essentially giving effect to the notion that the defendants pay the claimant’s costs of the action (on the standard basis to be subject to detailed assessment if not agreed).

This is the factual background to a recent case, which led to a dispute on fixed recoverable success fees.

In November 2020, Master Rowley, in the Senior Courts Costs Office, was asked the question: did the claimant's claim conclude at trial, or before the trial commenced?

The answer would determine the percentage of the success fee that he was entitled to recover. 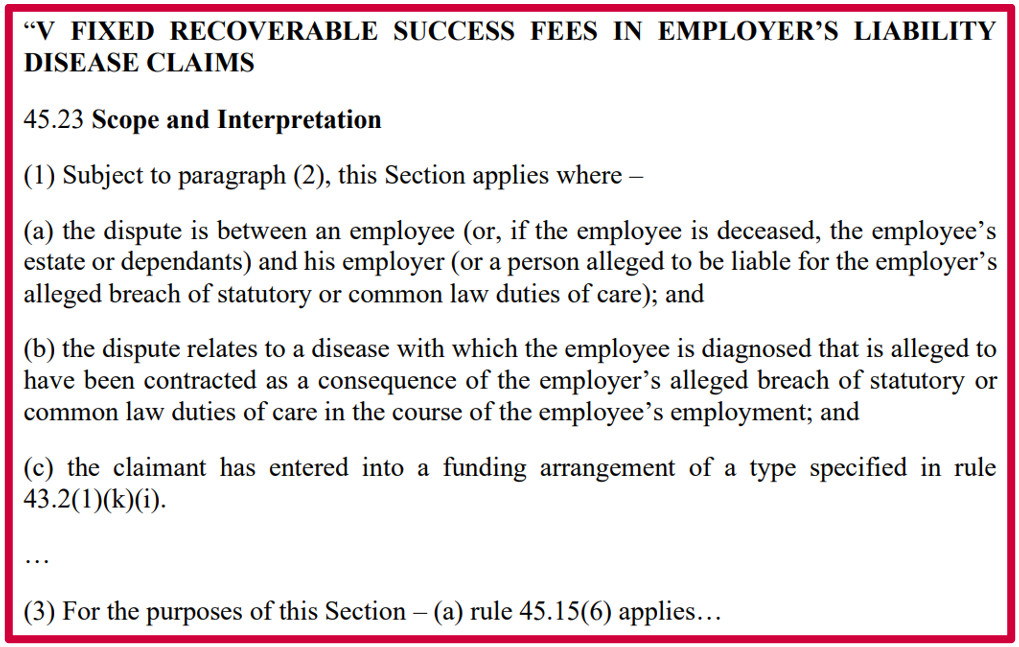 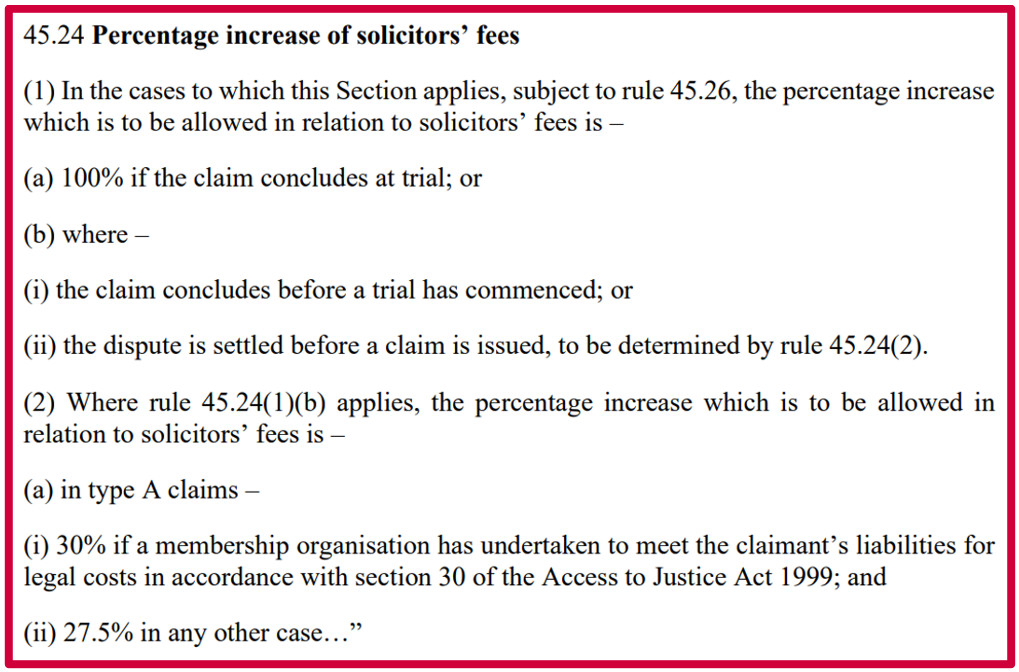 By way of a ruling, dated 17 November 2020, the Master found that the claimant was only entitled to recover a 27.5% success fee on costs incurred in pursuit of his asbestos-related disease claim, as: ‘the costs question was not a contested issue that was sufficient to consider the case to be concluded at trial’, i.e. it fell under CPR 45.24(2)(ii).

In order for the claim to have fallen under CPR 45.24(1)(a), the judge perceived that the success fee would have needed to be at risk by the possibility of the claimant losing. He accepted that this principle does not translate in relation to quantum as ‘easily’ as it does to liability and causation, but maintained his reasoning. In addition, he commented that a case where the parties have reached an agreement in respect of everything apart from costs could not be described by a split trial and was not sufficient to create a ‘contested issue in the manner of a trial’, per CPR 45.15(6). This was especially so, as the costs in question did not represent the proceedings as a whole, but a ‘minor’ part that would not even have been in contention, had there been agreement on damages for immunotherapy costs sooner, i.e. the quantum hearing would have been vacated and costs of attendance would not have been incurred.

The most recent judgment in Moutarde v SIG Logistics & Anor [2021] EWHC 1670 (QB) dealt with the claimant’s oral application for permission to appeal against the decision of Master Rowley.

The grounds of appeal were namely that:

Mr Justice Calver, at the High Court, rejected the claimant’s application on both grounds.

An applicant is only entitled to a 100% success fee ‘if the claim concludes at trial’. What this means, by interpretation of the relevant procedure rules, is that the substantive claim (not for entitlement to costs, but for damages for breach of duty, won by establishing duty of care, breach and causation) concludes by settlement after the final contested hearing has commenced or by judgment:

‘Indeed, were it otherwise it would potentially lead to absurd consequences: a party could obtain a 100% success fee if any small dispute about costs remained outstanding despite the parties having agreed all substantive terms of the settlement of the claim. The Claimant's construction of CPR 45.24(1) would encourage a claimant to settle the claim but to separately require a small costs dispute to be resolved thereafter in order to trigger the 100% success fee’.

In this case, both liability and quantum were agreed prior to the hearing with Stewart J. He was not presiding over a final contested hearing, but merely giving effect to a Tomlin Order that had been drawn up between the parties.

Moutarde could not be distinguished by Wilson LJ’s obiter comments in Thenga v Quinn [2009] EWCA Civ 151, that the ‘final contested hearing’ includes ‘probably … a hearing referable to a disputed claim for an award of costs in principle (emphasis added)’.

The reality was that Stewart J had presided over an uncontested hearing, with the only discrete issue being that the claimant had allegedly behaved unreasonably in finalising the settlement. Had this been the finding of the court, then an additional term of the Court order giving effect to the Tomlin Order (and the costs of the claim), could have made provision for separate wasted costs, incurred by the defendants.

A supplementary term of that kind could not sensibly be said to ‘transform’ the claim, for the purposes of the rules, from one settled before the trial commenced to one concluded at trial:

‘As Mrs Justice Slade stated in James v Ireland, the 100% percentage increase is payable when a settlement is reached after the commencement of the final contested hearing (in that case on liability, but it could equally be the contested assessment of damages hearing). It is not triggered by the commencement of any hearing of whatever nature related to the final contested liability or assessment of damages hearing. Indeed, in this case it is arguably not even related to a final contested hearing of the claim, whether as to liability or damages’.