Back in April 2018, the Industrial Injuries Advisory Council published a Position Paper on ‘Coal mining, silicosis and cancer’.

We covered this in edition 237 of BC Disease News (here).

The Paper was primarily concerned with the potential eligibility of coalminers with silicosis to claim disablement benefit for lung cancer under the prescribed disease, D11: ‘Primary carcinoma of the lung where there is accompanying silicosis’, after a trade unionist representative questioned whether coalminers were included within the description: ‘tunnelling in, or quarrying sandstone or granite’. 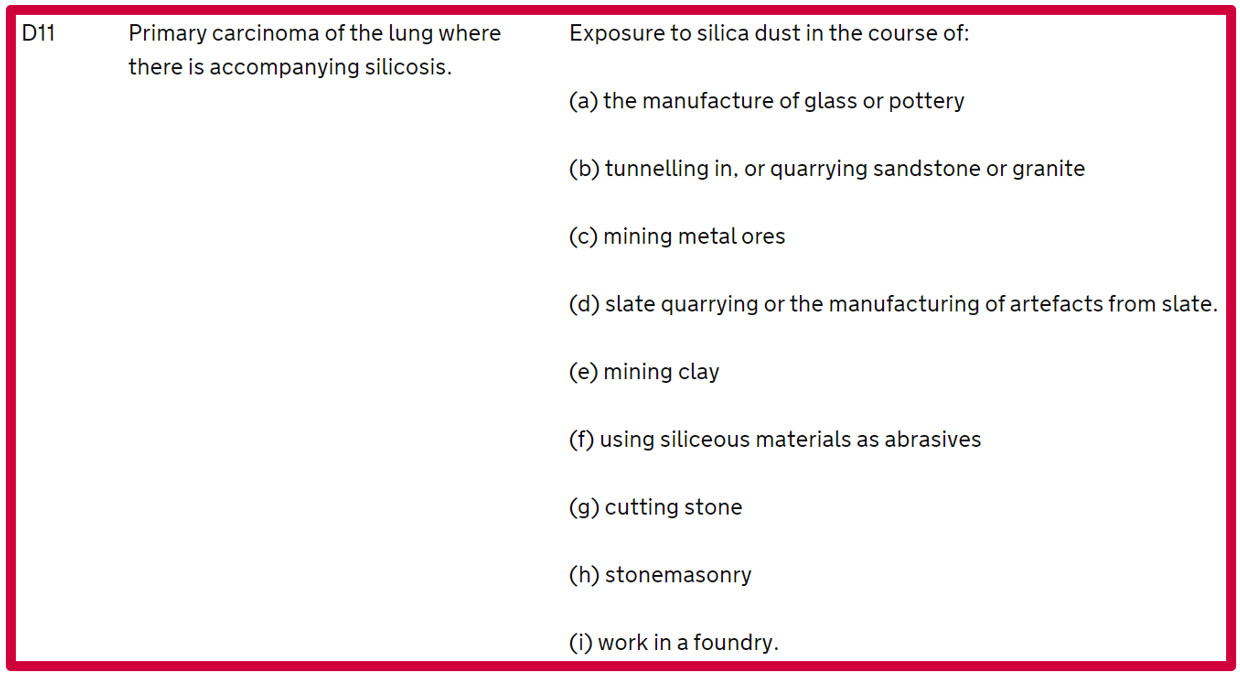 Ultimately, the Council recommended that a prima facie case exists for recognising a disease in a coalminer with lung cancer if:

It must also be shown that the dust exposure was plausible, containing silica in sufficient proportion.

An important part of the Report’s discussion section, which links to the present article, was the Council’s declaration that coalminers are not ordinarily at increased risk of lung cancer, due to the absence of an exposure-response relationship with exposure to coal dust. Essentially, that lung cancer risk will only increase where there has been ‘substantial exposure’ to silica, generally through activities such as ‘tunnelling, hard heading and brushing, roof bolting, drilling (other than into coal), but explicitly involve cutting hard rock, usually sandstone’.

Contrary to this, a recent systematic review and meta-analysis carried out by a team of Chinese researchers, has identified ‘high quality evidence’ of a positive association between coalmine dust exposure and lung cancer mortality, disproportionately affecting Asian populations compared to the general population (with no or low dust exposure), between 1980 and 2000.[1]

A total of 22 different studies (7 of which concentrated on UK coalmining), documenting 8,909 coalminer deaths between 1964 and 2017, were analysed.

The pooled relative risk of mortality from lung cancer across all studies was 1.16 for coalminers, with the risk being greater in the period from 1980 to 2000 (1.56) than before 1980 (0.99) or after 2000 (1.09). Cohort studies also revealed higher risk levels (1.42) than case control (1.26) or descriptive studies (1.01). As regards to the relevant control groups, coalminers exposed to mining dust were more susceptible to lung cancer deaths against the general population (1.23), than against other coalminers (1.19) or quarrymen (0.78). The most prominent heterogeneity among enrolled studies was ostensibly caused by ethnic differences, as the risk estimate for lung cancer mortality among the Asian population was 4.94, versus 1.05 for Caucasians and 0.96 for Caucasian/Black populations. Further, a statistically significant correlation between dust exposure and deaths from lung cancer was observed in studies of high quality (1.28), but not in those of moderate quality (1.01).

Overall, the study authors reflect that the magnitude of the risk to Asian populations, especially, is of ‘major global public health importance’, which ‘should prompt relevant departments to take more strict measures for the measurement and control of the occupational dust and the protection for coalminers’ worldwide.

They conclude that there is ‘an urgent need for the accurate estimate of mortality risk from lung cancer for coalminers’.

An acknowledged limitation of this study was the apparent variance in lung cancer mortality, most substantially influenced by ethnicity, to the extent that coalmine dust exposure may not in fact increase the risk for Caucasian and Black individuals.

It was openly admitted that ‘evidence on the carcinogenicity of coalmine dust in occupational settings is still conflicting’, but what was not recognised by the researchers involved in this study was that varying mortality risk levels could have been recorded because coal dust and silica dust were not explicitly differentiated under the ‘coalmine dust’ umbrella. There was no mention of silicosis and therefore no evaluation of lung cancer mortality without silicosis, potentially caused by ‘coal dust’ alone.

We will continue to monitor this field of study for the purposes of future IIAC reviews on the subject.