On 29 November 2019, His Honour Judge Gore QC dismissed a claimant’s claim for damages for personal injury, arising from an accident in the workplace, on the basis that there was no foreseeable risk of injury.[i]

The claim regarded an engineering technician, who sustained a hyperextension fracture to the 4th metacarpal bone of his left hand, in the 14th year of his employment at the personal and beauty care product manufacturing plant, on 7 February 2013, aged 38.

He did so whilst manoeuvring an ‘unwieldly’, disused dispensing pump, which had been out of service for some time, but needed to be mended to fulfil a new order that the company had received.

After having worked on the accessible parts of the pump, it was necessary for him to manipulate the machinery to work on its underside. In carrying out this ‘time critical’ exercise, the technician had to contend with the fact that the machinery had an unevenly distributed weight of 48 kg (right side was heavier than the left) and was irregularly shaped (comprising of hoses, valves and pipework), measuring 90 cm x 36 cm x 50 cm. As such, he used the following technique:

He … took hold of the back left leg with his left hand and lifted the machine up on the left, the lighter, side whilst grasping pipework on the right side with his right hand using the back right leg as a pivot.

Despite being unaware of his hand getting trapped, crushed, or impacted in any way, his palm was fractured in the process. What is more, his recovery from this injury was scuppered by the subsequent development of regional pain syndrome, which resulted in him being unfit continue his job role.

The technician commenced a claim in negligence against his employer.

At the 1st instance trial of liability, closing submissions focused predominantly on alleged breaches of Regulations 4(1)(a) and 4(1)(b) of the Manual Handling Operation Regulations 1992, namely that the defendant employer had failed in its duty to avoid the need for the claimant to undertake manual handling operations which involved a risk of injury and that it had failed to make a suitable and sufficient assessment of the claimant’s manual handling operations. 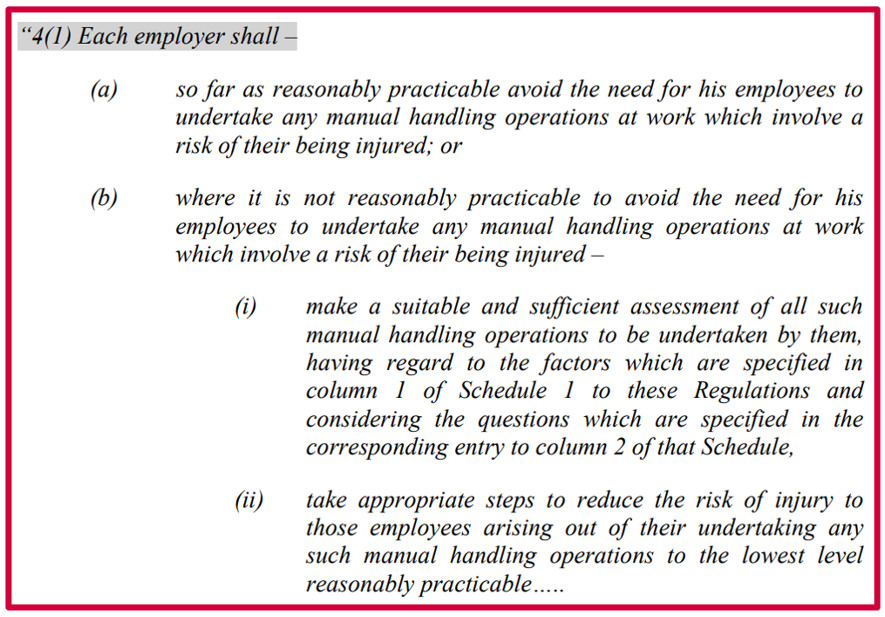 The claimant’s role was ‘very varied’, in that he would, on an ad hoc basis, identify faults on broken down and faulty production line equipment and then repair them. For the most part, therefore, his work could not be planned for and both sides accepted that it would have been ‘impossible’ and ‘wholly impracticable’ to risk assess every task the claimant undertook in advance without creating ‘literally thousands of pages’ of instructions (‘method statements’) on best practice.

He did receive training on ‘dynamic risk assessments’, which instructed him to personally assess the risk of each manual handling operation that he was to perform and then evaluate whether he had the capability to complete the task at hand.

If he considered that he was able, he was instructed to adopt the safest course of action. If, however, he was doubtful, he was instructed to ‘seek help from a suitably trained colleague or inform the supervisor or, alternatively, approach the task in a different way by trying to break the load down if that was possible’. It was agreed that the workplace culture encouraged ‘asking for help if help were needed’.

That being said, lay witness evidence painted the claimant as ‘technically adept … competent and experienced, a good problem solver, self-reliant and able to complete tasks to a high standard, bringing to the job a high degree of engineering knowledge … a high quality, professional member of staff’. He was a mentor to junior co-workers.

HHJ Gore QC reasoned that, in order for the risk of injury to be deemed ‘foreseeable’, it need not approach a ‘probability’, but should be seen as a ‘real risk’ – read the lead judgment given by the then Lady Justice Hale, in Koonjul v Thameslink Healthcare Services [2000] PIQR P123.

Besides stressing the need for an ‘element of realism’ underpinning risk, the judge emphasised that ‘the question of what does involve a risk of injury must be context based’, i.e. is a particular operation in a particular place of employment with particular employees a foreseeable risk?

In the context of this particular case, HHJ Gore QC observed that:

Thus, the claimant failed to surpass the ‘gateway provision’ in Regulation 4(1)(a), on foreseeability, such that no duty, prescribed by (1)(a) or (1)(b), was triggered.

This finding was appealed, firstly, on the grounds that it was ‘irrational and wrong given the accepted size, weight and unwieldy nature of the pump and the fact that the handling was being performed on a work bench at waist height’; the manoeuvre would have transmitted ‘substantial weight and force’ through the claimant’s outstretched arms, exceeding the recommended safe lifting limits by ‘some considerable margin’. Further, that the lower court judge erroneously conflated his assessment of foreseeable risk with the claimant’s training and experience in conducting ‘dynamic risk assessments’ – see paragraph 55 of the judgment (above). Counsel for the claimant argued, on this second point, that the ‘clear hierarchy or sequence of questions’ to ask when there is a suspected breach of Regulation 4, had been neglected:

At the High Court, Lambert J dismissed the claimant’s appeal on both grounds.

She reiterated that the ‘starting point’ for assessing risk of personal injury was to follow Koonjul [which had itself been incorporated into Regulation 4(3)], as HHJ Gore QC had, and to take into account the relevant occupational context, including the claimant’s ‘dynamic risk assessment training’ and the content of that training.

As such, the lower court had not just been ‘entitled to’ adopt the approach that it did, but was ‘required to’. There was ‘no flaw, either of fact or law’, nor was there any conflation of ‘hierarchical’ steps.

Although, counsel for the defendant correctly identified that a totally different occupational context could have led to the opposite judicial determination, for instance:

‘… if an inexperienced and untrained employee had been tasked on a one-off basis with carrying out the kind of operation which was routine to the Appellant, the range of considerations involved would be very different and the risk of injury might then be foreseeable’.

As to the criticism aimed at HHJ Gore QC’s conclusion that there was ‘nothing inherently or uniquely dangerous’ about the relevant operation, again, Lambert J found that the county court decision was not wrong. The claimant did not handle the full weight of the pump, as he used the his right foot as a pivot. In the absence of expert evidence, the nature of the forces applied to his hands and arms were not known and this entitled the 1st instance judge to find that the manoeuvre did not carry an intrinsic risk of injury.

In summation, the original findings could not be described as ‘irrational or contrary to common sense’ and the appeal was dismissed.

[i] Jessica Woodliffe, ‘Context is Everything: Considering Risk of Injury in the Workplace’ (23 October 2021 Ropewalk Chambers) <https://www.ropewalk.co.uk/knowledge-sharing/blog/personal-injury/1731/context-is-everything-considering-risk-of-injury-in-the-workplace> accessed 4 February 2020.