In edition 315 of BC Disease News (here), we reported on the proposed 4th revision of the Carcinogens and Mutagens Directive (CMD) 2004/37/EC by producing bullet point checklists on the uses of acrylonitrile, nickel compounds and benzene and the occupational exposure limits needed to (further) reduce adverse health implications.

In response, the European Trade Union Confederation (ETUC) welcomed the proposal as a ‘step in the right direction’.[i]

However, the Confederation criticised the EU for failing to update existing OELs for respirable crystalline silica, diesel emissions and asbestos and reiterated its objective for the CMD to establish OELs for at least 50 priority carcinogens by 2024 (hypothetically under a new ‘coherent and transparent’ Germany/Netherlands-inspired system) – as it stands, workplace exposures to 26 carcinogenic and mutagenic substances are encompassed within existing legislation.

In the week commencing 12 October 2020, the European Commission launched its Renovation Wave initiative, which is expected to double the Union’s annual rate of energy-related building renovations to 2% and satisfy the 2030 climate target.

Accepting that this will affect workers in manufacturing and construction, who constitute a significant proportion of the target audience of the 4th CMD proposal, the EU Reporter has questioned whether the draft legislation should be extended to include insulation (waste) products – specifically mineral wool – otherwise recognised by the term ‘man-made vitreous fibres’ (MMVF). 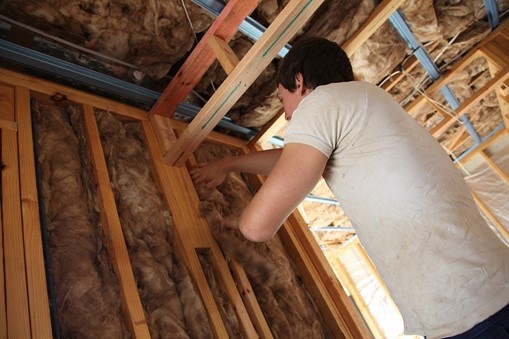 As the UK Government incrementally banned the importation and use of asbestos from the mid-1980’s onwards, mineral wool was the natural silicate-based successor and has been fitted in homes and businesses to provide thermal and acoustic insulation for several decades.

However, MMVF is itself classified as a ‘suspected carcinogen’ in the Regulation on Classification, Labelling and Packaging of Substances and Mixtures 1272/2008/EC and is commonly manufactured with phenolic resins, which act as a binding agent. An example resin is phenol-urea-formaldehyde (PUF), with formaldehyde having been incidentally regulated under the 3rd revision of the CMD (we reported this here).

Until now, talk of MMVF being accounted for in an amendment to the CMD has been limited to pure speculation, though pressure has been mounting for some time to enact measures that protect workers (predominantly against the injurious inhalation of airborne fibres released upon production, use and removal), not least because of additional speculated increases in risk of chronic obstructive pulmonary disease (COPD) and skin abnormalities.

At a Brussels Conference, in 2018, EU Today explained that the International Agency for Research on Cancer’s (IARC) declassification of MMVF as a carcinogen, in 2002 (overturning the original category 2b classification in 1988), hinged on laboratory testing of a heavily refined substance (excluding oils and resins), in 1995, which never enter the market for consumers. As such, one of the key recommendations to emerge from the media platform’s Report was a ‘clear and urgent need’ for the re-testing of products used in practice.

Further accentuating this argument is Wohlleben et al (2017).[ii] In that study, the lead researchers discovered that modern MMVF samples (‘high-alumina, low-silica wool’) from Germany, Finland, UK, Denmark, Russia, and China, whose composition had been modified to be less biopersistent than traditional MMVF [‘pre-1995 Rock (Stone) wool’] and therefore theoretically less toxic, produced comparable respirable fractions, which could only be differentiated once the binder had been removed. Essentially, neither traditional, nor modern commercially-available MMVF, was labelled as a ‘good substitute’ for asbestos.

In 2019, Aurel Laurenţiu Plosceanu, from the European Economic and Social Committee and the Rapporteur on ‘Working with Hazardous Substances’, appeared before the European Parliament to state that:

‘More needs to be done to make more people aware of the potential dangers of mineral wool. There is a real risk associated with this material and, like asbestos, people need to be made aware of the possible risks. The particular problem with this material is that any health problems may not actually appear in someone until long after their exposure to it. With something like lung cancer, which, as with asbestos, is a possible health risk associated with this, unfortunately that could be too late’.[iii]

And earlier this year, the Austrian state television’s website, ORF.at, published an article boldly describing mineral wool as ‘as carcinogenic as asbestos’.[iv]

In the coming months, the European Parliament and Council will have opportunities to make changes to the 4th revision of the CMD before formal ratification. Whether or not adding MMVF to the Directive will be on the agenda remains to be seen.