On 25 September 2020, judgment was handed down on the case of Greater Manchester Fire and Rescue Service v Veevers [2020] EWHC 2550 (Comm), which dealt with principles governing the recoverability of inquest costs in fatal injury claims.[i]

The claimant brought a claim under the Law Reform Miscellaneous Provisions Act 1934 and the Fatal Accident Act 1976, after her son died of hypoxia and heat exhaustion in the course of his employment as a firefighter, in July 2013.

Proceedings were issued and served by November 2016. Thereafter, the defendant served its defence, within which liability was admitted to compensate the estate and dependents of the deceased for ‘damages and consequential losses’. Settlement was subsequently reached in the sum of £80,000. The defendant also agreed to pay the claimant’s reasonable costs incurred.

However, upon assessment of these costs, the defendant challenged the claimant’s entitlement to the ‘substantial’ costs of preparing for and attending the inquest into the deceased’s death (the inquest took place from 4 April 2016 to 18 May 2016), amounting to 42% (£141,000) of the total bill of £334,000.

At 1st instance, Deputy District Judge Harris, sitting as the Regional Costs Judge for Manchester, held that the costs associated with inquest attendance were in principle recoverable, subject to the detailed assessment of those costs.

The present decision dealt with the defendant’s appeal.

Recoverability of the claimant’s inquest-related costs was ultimately contingent upon those costs being ‘of and incidental to’ their civil claim and/or considered reasonable and/or proportionate. An admission of liability would also be a material and possibly determinative factor when assessing recoverability.

Essentially what was disputed between the parties was the effect of a letter (dated 4 February 2016), drafted by the defendant’s legal representative and pre-dating both the inquest and commencement of the claim, which not only introduced them as acting on behalf of the defendant (and its EL/PL insurer), but also stated as follows:

‘Our clients are not in a position to consider an admission of liability and we have not undertaken a detailed forensic analysis of the potential for liability in any civil claim on their behalf.

We write in open correspondence in order to advise that our clients are willing to compensate the estate and dependents of Stephen Hunt pursuant to the Fatal Accidents Act 1976 and Law Reform (Miscellaneous Provisions) Act 1934, for any loss which they may prove to be attributable to the incident on 13 July 2013 together with payment of their reasonable costs.

It is not our client's intention to allege contributory negligence or to seek any reduction of damages in this regard. We confirm that our clients will deal with the claims on a full basis’.

The claimant, relying on the 1st paragraph of the above quote, construed the letter as no more than an ‘offer’ which could be withdrawn any time thereafter, not least because one of the matters to be discussed at the then approaching inquest was whether the deceased had followed instructions or gone off on a ‘frolic of his own’, i.e. a probative discussion on liability. What is more, the defendant’s use of the conditional verb, ‘may’, in relation to compensable losses attributable to the accident, implied that the issue of liability was ongoing and therefore ambiguous. The fact that the defendant declined to confirm its admission of liability in subsequent correspondence only served to validate the claimant’s insinuation.

Whereas, the defendant, relying on the 2nd and 3rd paragraphs quoted, submitted that the letter constituted an admission of liability ‘beyond doubt’, which was why the claimant chose to refer to it in their Particulars of Claim and why the 1st instance judge deemed it to be an ‘irrefutable fact’ that any claims brought would be satisfied in full. Parallels were drawn between correspondence in the present case and correspondence in Ross v The Owners of the Ship 'Bowbelle' [1997] EWCA Civ 1343 (wherein the defendant sent a letter that made no admission of liability, but contained a ‘concession’ of ‘real significance’). In Ross, Clarke J rebuffed the assertion that ‘all the costs of attending a full inquest could fairly be regarded as costs of or incidental to the contemplated proceedings’.

In summation, the claimant argued that there had been no admission of liability and the inquest costs were therefore still recoverable, because they remained ‘of and incidental to’ the civil claim. By contrast, the defendant argued the total opposite.

The appeal was heard by His Honour Judge Pearce, on 26 August 2020, and he found in favour of the claimant:

‘I see no error in the judgment of District Judge Harris sufficient as to justify this court interfering with his judgment. On the contrary, he carried out a balancing exercise on the facts of the case and reached a conclusion that lay well within the proper ambit of the exercise of his evaluation of the facts. In those circumstances, costs of preparing for and attending the inquest are costs "of and incidental" to the instant claim and are in principle reasonable and proportionate is a conclusion that he was entitled to reach, and the appeal is dismissed’.

Pivotal to this finding was the clear distinction made between Ross and Veevers, namely that the communications in the former case amounted to an admission of negligence (breach of duty only) at the very least, but did not amount to the same in the latter case:

It was also significant that the defendant’s so-called ‘admission’ was not made in line with CPR 14.1A (a procedural scheme whereby binding admissions can be made and then taken advantage of through entry of liability). By bypassing the CPR 14.1A regime, the claimant was unable to enter judgment. This, combined with the dismissive tone of the correspondence and the subsequent refusal to make a formal admission, put the defendant at risk of liability for the claimant’s inquest costs. 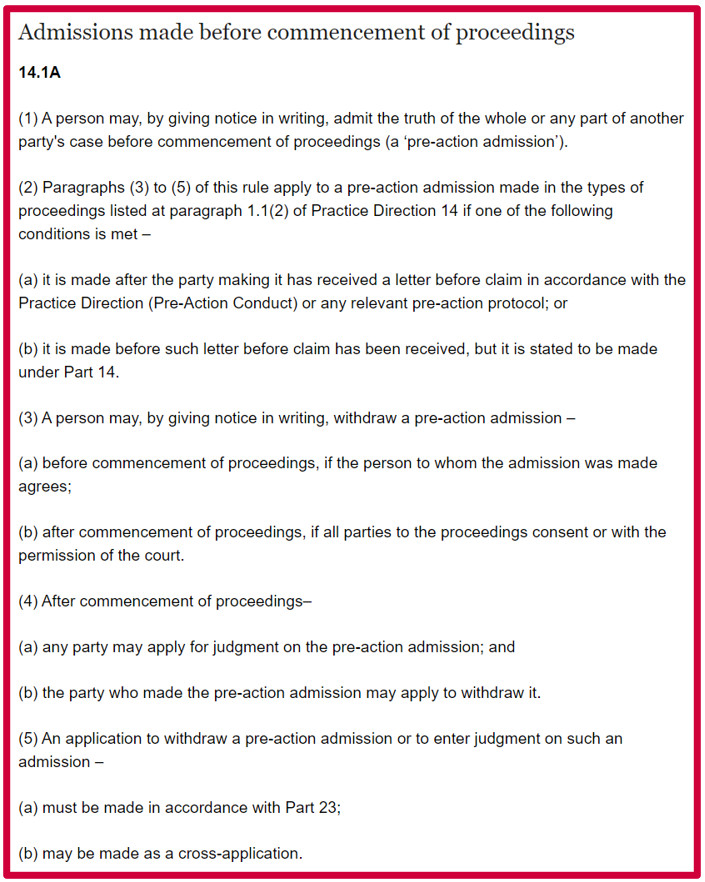