In edition 190 of BC Disease News (here), we précised the Court of Appeal judgment in Harrison v University Hospitals Coventry & Warwickshire NHS Trust [2017] EWCA Civ 792, in which Davis LJ elucidated that:

‘... where there is a proposed departure from the budget, upwards or downwards, the Court, on a Detailed Assessment, is empowered to sanction such a departure if it is satisfied that there is good reason for doing so. That, of course, is a significant fetter on the Court having an unrestricted discretion: it is deliberately designed to be so. Costs Judges should therefore be expected not to adopt a lax or overindulgent approach to the need to find good reason, if only because to do so would tend to subvert one of the principal purposes of costs budgeting and against the overriding objective.

As to what would constitute good reason in any given case, I think it much better not to seek to proffer any further, necessarily generalised guidance or examples; the matter can safely be left to the individual appraisal and evaluation of Costs Judges by references to the circumstances of each individual case’.

Last week, County Court judgment was handed down in the case of Chapman v Norfolk and Norwich University Hospitals NHS Foundation Trust (2020), wherein District Judge Lumb provided ‘detailed reasoning’ as to why he had not established ‘good reason’ to depart from the costs budget, as laid down in a costs management order (CMO).

He provided some objective guidance on how judges at detailed assessment might distinguish conduct that constitutes ‘good reason’, for the purpose of CPR 3.18(b), from conduct that does not. 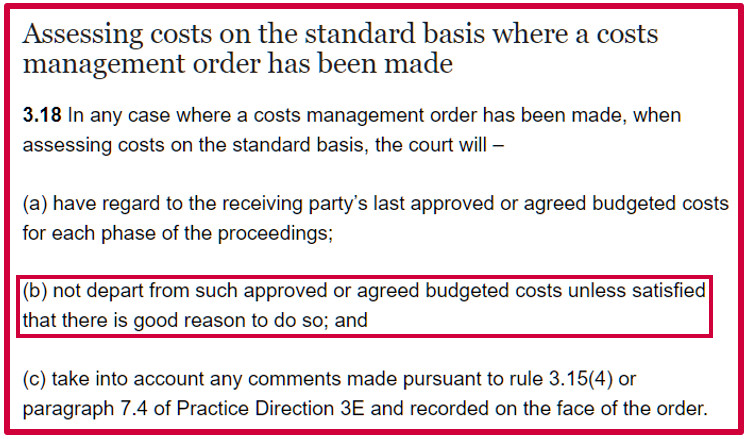 Chapman stemmed from a successful claim for damages for clinical negligence against the defendant.

The CMO, made by District Judge Kelly, accounted for phases of the receiving party’s budget (‘Expert Reports’ and ‘ADR’), which, upon conclusion of the case, were incomplete (because the claim settled pre-trial).

In these circumstances, could the claimant expect to recover full costs, as specified by the CMO, or was this a scenario where a judge would be entitled to find that there was ‘good reason’ to depart?

DJ Lumb, when introducing the issue before him, acknowledged that ‘good reason’, per Davis LJ in Harrison, was a ‘high hurdle’ to overcome. He also revealed that there were not many reported judgments in circulation where Courts had found ‘good reason’ to depart and that this was ‘unsurprising’ to him, as assessment is ordinarily conducted on a case-by-case basis.

Nevertheless, the County Court judge was provided with a transcript of Salmon v Barts Health NHS Trust, an unreported non-binding judgment.[i] In this factually similar case, His Honour Judge Dight concluded that:

‘... having regard to what was said by Lord Justice Davis in the Harrison judgment, the fact that the sum claimed is lower than the budgeted figure, because of the indemnity principle, is itself capable of being a good reason’ [paragraph 36].

However, DJ Lumb disagreed with the Designated Circuit Judge for Central London’s proposition that failing to spend ‘the totality’ of budgeted figures amounts to ‘good reason’ and invites the paying party to make further submissions on a more ‘appropriate’ figure:

‘If that approach was correct virtually every case would go to Detailed Assessment and there would be a perverse incentive to a prospective receiving party to overspend and marginally exceed every phase in order to avoid a Detailed Assessment ... that cannot possibly have been the intention of the rule makers’.

In the present case, it was clear that DJ Kelly had created ‘certainty’, by properly assessing the range of ‘reasonable’ and ‘proportionate’ costs for each phase and determining the ‘limit of recoverability’. Even though phases were left incomplete, work in relation to these phases had been done:

‘Any suggestion otherwise would be tantamount to an allegation of fraud and serious professional misconduct of wrongful certification of a bill that contravened the Indemnity Principle’.

What is more, it could not be said that there had been ‘deliberate’ overspending or costs building to ‘use up the allowance in the budget’, despite the fact that expenditure was greater than one might have expected for the stage that the parties had reached:

‘... if they had continued to incur those costs at that rate until the ultimate conclusion of a trial, they would have exceeded the budgeted figures for those phases, at risk of being unable to recover those excess costs’.

Thus, in cases where the costs outlay is within budget, ‘very clear evidence of obvious overspending’ is needed before arguments on ‘good reason’ will be entertained, let alone assented to.

Whilst the District Judge re-affirmed that the CMO is not a ‘rubber stamp of automatic entitlement’, it is a type of order that allows the spending party to go about their business how he/she wishes:

‘It is not the role of the Costs Judge at Detailed Assessment to carry out a calculation of what, in his view, is the level of the proportion of a budgeted phase that a prudent receiving party would have incurred where that phase has not been completed. Such an approach would completely undermine the whole purpose of costs budgeting in the first place. One of the principal objectives of the budgeting regime was to reduce the number of Detailed Assessments. Such an approach would potentially lead to a Detailed Assessment of budgeted costs in every case that settled before trial’.

To avoid an opening of floodgates, DJ Lumb implied that ‘good reason’, in principle, must require ‘something amounting to a specific and substantial point arising in the case, as opposed to merely a general point’ if it is to be used as an ‘important safeguard against a real risk of injustice’.

In the same way that partially spent budgets are unlikely to constitute ‘good reason’, the Judge held that complaints of budgets being set ‘too generously’ or ‘on too miserly a basis’ will be met with equal response. He warned against creating ‘double jeopardy’ situations, which have the propensity to ‘undermine’ the budgeting process.