When proceedings were purportedly served at the ‘last known place of business’ of the 3rd defendant (the defendant), on 1 September 2017, the claimant’s solicitors were aware that it had been struck off the Register of Companies and subsequently dissolved.

Around the date of purported service, the claimant’s solicitors also wrote a letter to the defendant (and its insurers), which addressed its assumed position on the legality of the claim, with respect to the defendant’s inactive status. 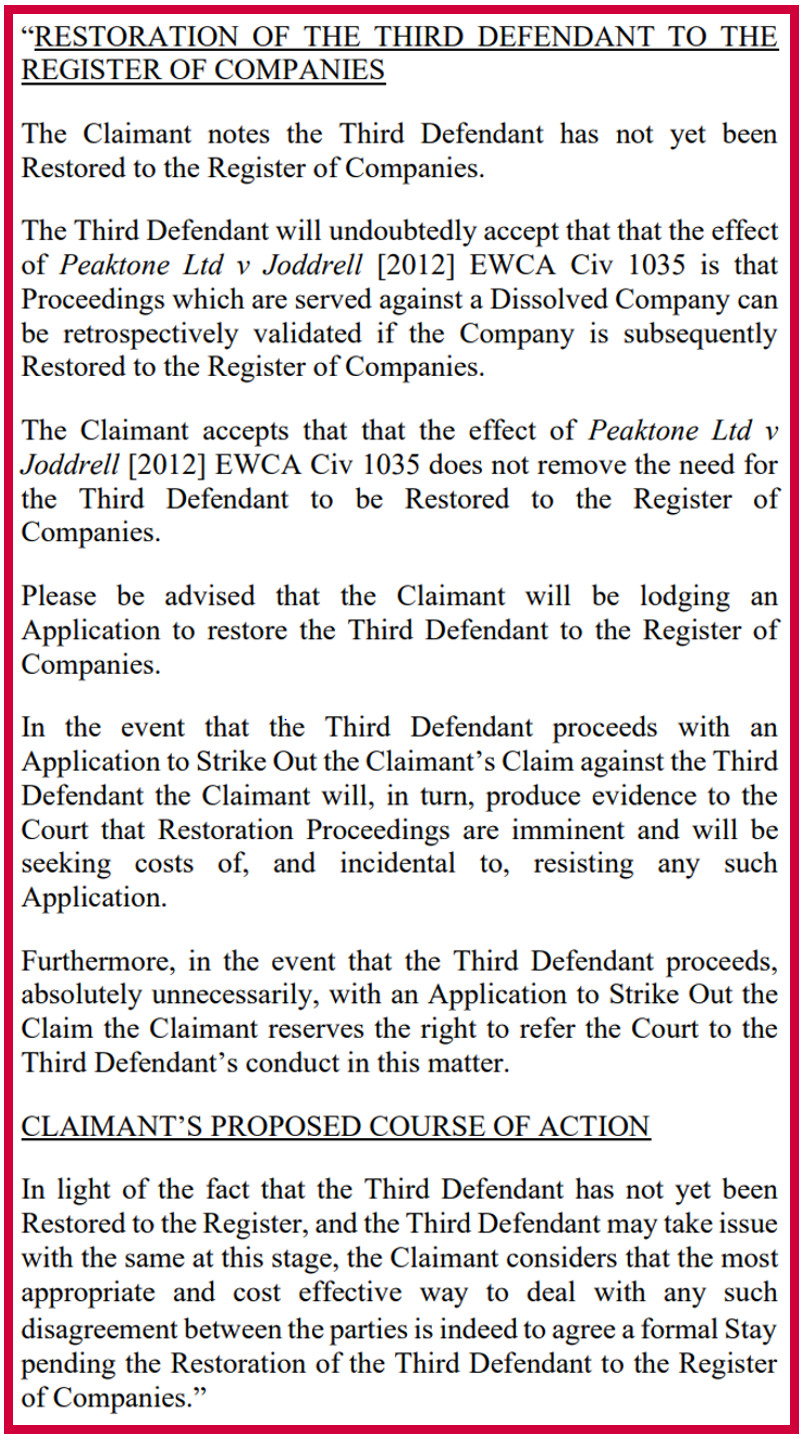 Giving instructions on behalf of its employers’ liability (EL) insured, Royal Sun & Alliance (RSA) Insurance PLC contended that proceedings could not be served on the defendant, as it was still dissolved.

However, on 27 April 2018, the defendant’s solicitors (instructed by RSA), indicated that it would likely file an Acknowledgment of Service on behalf of the defendant (‘... we are instructed to act on behalf of L.W. Carlisle & Company Limited’), which would contest jurisdiction on the basis that there had been no attempt to restore the company to the Register, thereby making the proceedings a ‘nullity’.

Accordingly, the defendant filed an application on 2 May 2018, which sought for the claim to be struck out (as an ‘abuse’ of the court’s process and/or for failing to comply with a rule, practice direction or court order), pursuant to CPR 3.4(2). Additionally, or in the alternative, the defendant sought a declaration that the court had no jurisdiction, or would not exercise its jurisdiction, pursuant to CPR 11(6). 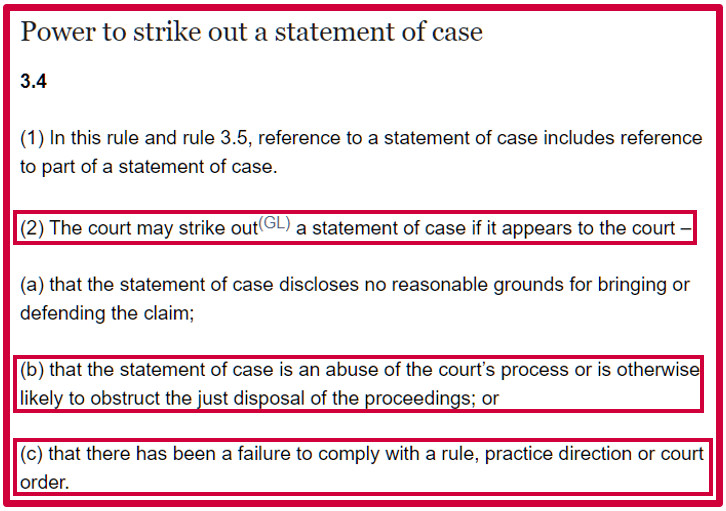 The 1st instance application hearing took place on 31 May 2018, before District Judge Etherington, who struck out the claim and ordered the claimant to serve a witness statement showing cause as to why they should not pay the defendant’s costs, summarily assessed at £555, or else the relevant order would be made.

In the course of the hearing, the District Judge rejected the claimant’s submission that restoration of the defendant to the Register would retrospectively validate ‘good service’ of the claim form (per Munby LJ, in Peaktone Ltd v Joddrell [2012] EWCA Civ 1035), as the courts ‘... will only correct errors in procedure where there is imminent restoration ...’

He went on to reject any notion that the claim would be stayed, because the claimant’s solicitors had created a nonsensical excuse with ‘loads of factious technical arguments that all amount to nought’. They had not been ‘practical’ and taken steps to restore the company.

Indeed, it was not until 25 June 2018 that the restoration application was made to the High Court at Manchester (with the order having been granted on 5 February 2019).

On 14 November 2018, the first appeal of the District Judge’s decision was heard by His Honour Judge Rawlings, at Stoke-on-Trent County Court.

More in hope than expectation, the claimant’s 1st ground of appeal was that the judge had, in actual fact, declined jurisdiction under CPR 11(6). The defendant, in having filed and served its notice of Acknowledgment by 18 May 2018 (the delay having been caused by the fact that the claim was sent to the address of an inactive business), was posited as having been non-compliant with CPR 11(2) and the consequence of doing so therefore had to be that jurisdiction was conceded. 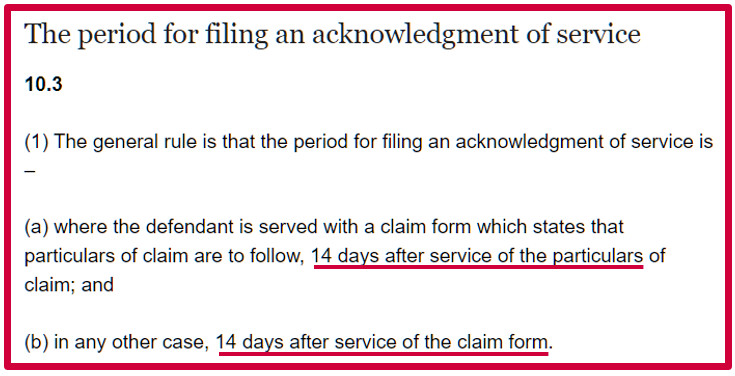 On a 2nd ground of appeal, the claimant submitted that, if the District Judge had instead acceded to an application made by a non-existent party, pursuant to CPR 3.4(2), then he had erred in striking out the claim by this method.

Ultimately HHJ Rawlings concluded that the claimant’s 1st ground of appeal was redundant, as DJ Etherington had clearly acted under CPR 3.4 and not CPR 11. Moving on to the 2nd ground, he reasoned that:

‘... it remained open to the court to exercise its case management powers to strike out a claim on the basis that the purported defendant did not exist and no sensible steps had been taken on the Appellant’s behalf to procure the company’s restoration to the register’.

Strike out was the ‘appropriate’ resolution and fell within the ambit of the District Judge’s discretionary powers of case management – see CPR 3.1(2)(m). 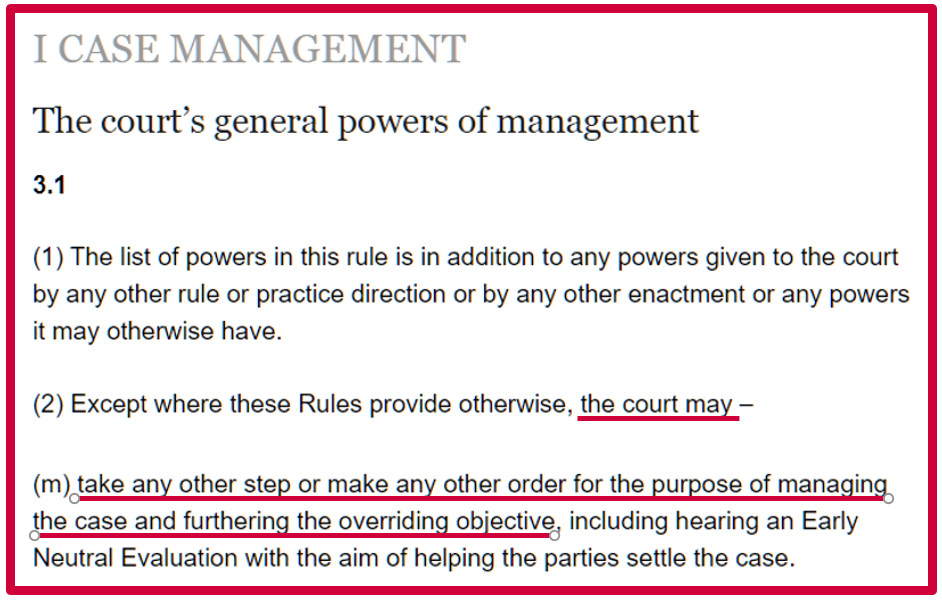 It was ‘remarkable’ to the Circuit Judge that proceedings were being ‘held up’ by such ‘excessive delay’ in taking steps that were necessary, i.e. restoring the defendant to the register, in conjunction with a stay of proceedings.

So, can a party ‘subvert’ a jurisdictional challenge ‘by the backdoor’, by invoking CPR 3.4 powers?

Based on the decision of HHJ Rawlings, the claimant argued, during the most recent Cowley appeal, that the judge at 1st instance had erred in striking out the case, in accordance with CPR 3.4(2)(c), when the ‘proper challenge’ was to contest jurisdiction under CPR 11 [per Dyson LJ, in Hoddinott & Ors v Persimmon Homes (Wessex) Ltd [2007] EWCA Civ 120], with an Acknowledgment of Service filed within the prescribed time limit. Alternatively, the claimant submitted that the defendant’s strike out application waived any right that it had to oppose jurisdiction.

This two-pronged line of argument mirrored the claimant’s 2nd submission in Peaktone, but because the appeal in that case succeeded on the 1st ground (retrospective validation of proceedings was achieved through restoration, under s.1032(1) of the Companies Act 2006), it was not necessary to provide an answer.

In Cowley, Lord Justices McCombe, Holroyde and Jackson also avoided this submission, albeit for a different reason. Claimant counsel’s entire argument centred around the unconvincing assertion that service had been validly effected ‘upon a company which at that time [i.e. when DJ Etherington struck out the claim] did not exist’. Put frankly, one cannot waive jurisdiction to null proceedings.

On the flipside, the Court of Appeal judges struggled to accept that the EL insurer could rely on subrogated authority when making its application in the defendant’s name, if the company was regarded as being non-existent:

‘... it seems such an authority to the Insurers to act as agents for the company may well have lapsed along with its dissolution, just as any agent’s authority would lapse on the death of the principal’.

N.B. If the right of subrogation ‘dies’ with a company, is it fair to assume that an insurer’s contractual liability to indemnify the dissolved is simultaneously extinguished (until it is resurrected by way of restoration)?

Despite this technicality, namely whether the defendant’s application had been ‘properly brought’, it was concluded that DJ Etherington was entitled to consider how best to progress the action in the exercise of his case management powers.

Following the dicta of HHJ Rawlings, the 1st instance judge could not have been faulted for striking out the claim:

‘In our judgment ... he was entitled to consider whether the overriding objective was properly served by the continued presence in the action of the name of a non-existent company. He was entitled to consider whether he should exercise the power to strike out the claim purportedly brought ... and he did not err in principle in making the strike out order ...’

‘An order restoring a company to the register might render insurers retrospectively liable for significant sums in proceedings which they have been in no position to resist. Without being prescriptive, we think that the wise course would be for such an insurer to notify the claimant of the dissolution of the company (if he or she did not know of it already) and to invite/require him or her to make an application for restoration of the company to the register and to apply to the court seised of the main claim for a stay of the substantive proceedings in the interim. In the absence of co-operation in this respect on the part of the claimant, the insurer should write to the court notifying it of the situation and asking it to consider making an order for a stay of its own motion until notified of any order for restoration. Following such a stay, if nothing is done after a sensible time, it would (we think) be open to the insurer to invite the court (of its own motion) to strike out the proceedings’.

It was ‘most disturbing’ to them that the costs expended on this ‘satellite litigation’ were around £50,000, when the NIHL claim was valued at just £5,000. 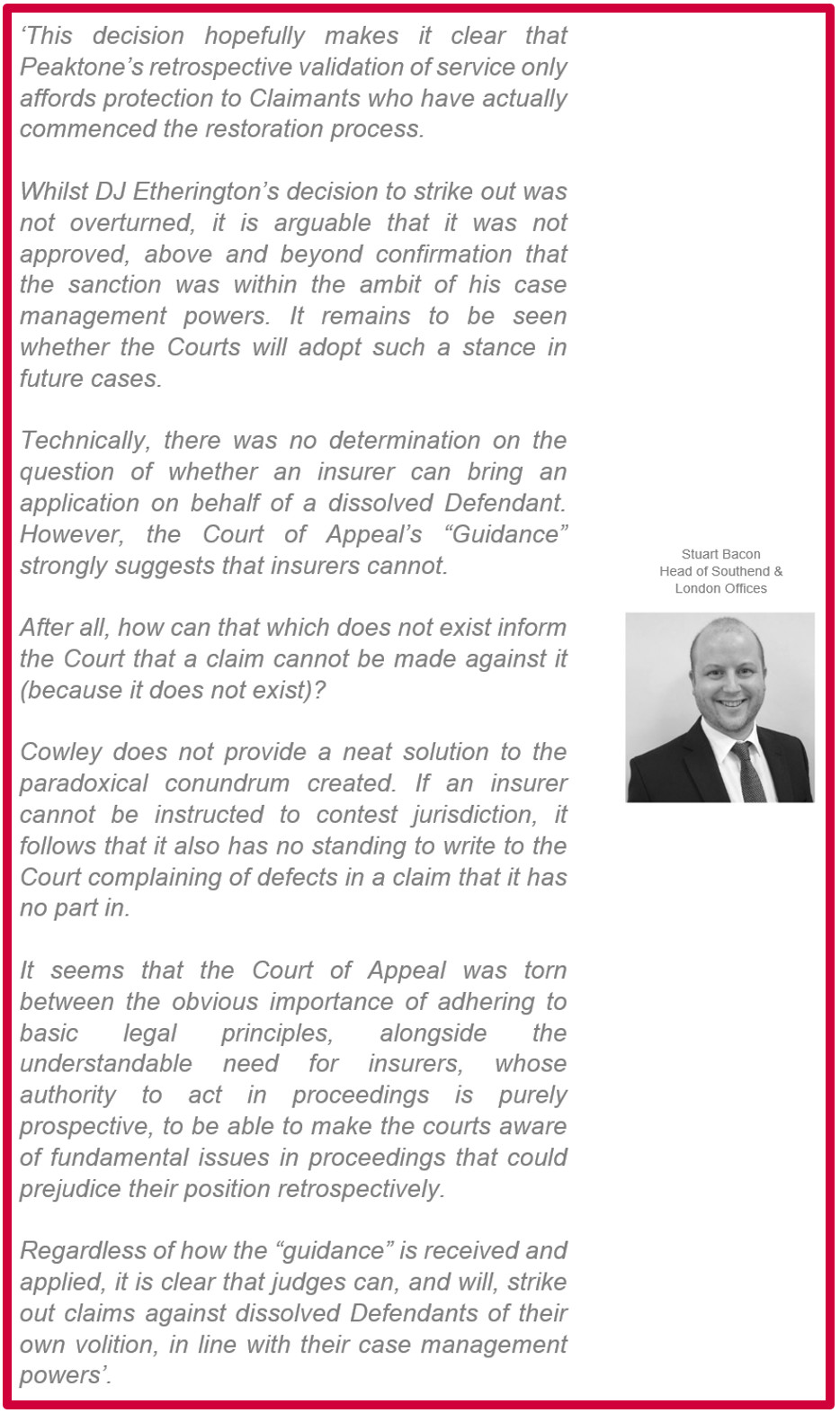 If it is indeed the case, from Cowley onwards, that insurers are deemed not to have the necessary authority to file an Acknowledgment of Service that contests jurisdiction, pending restoration of the dissolved insured, it may be wise cast aside any possible conflict with Barton v Wright Hassell [2018] UKSC 12 and Woodward v Phoenix [2019] EWCA Civ 985, which assert that a defendant is under no duty to ‘warn the opposing party of its mistakes’.

In proceedings involving a dissolved company, there may be practical benefits of following the ‘Guidance’ of the Court of Appeal over simply doing nothing. 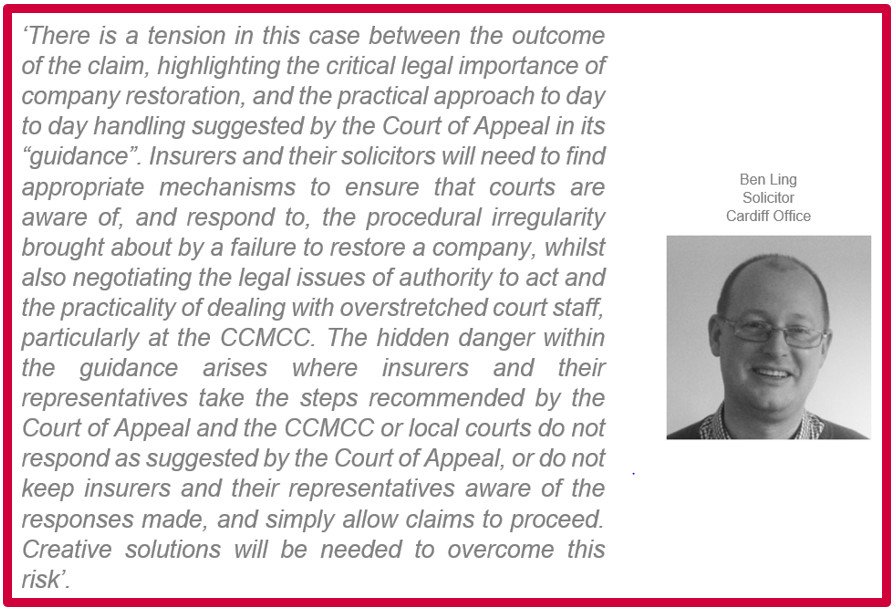