While academics are still in dispute[i] over whether asbestos exposure increases the risk of lung cancer in smokers [in fact, Berry and Liddell (2004) identified a greater risk in non-smokers[ii]] and, if it does, whether there is an ‘additive’ (the effect of each factor is independent) or ‘multiplicative’ risk (the effect of one factor multiplies the risk of another), what is settled is that exposure to asbestos[iii] and tobacco smoking[iv] are both known causes of lung cancer in their own right.

Clinical literature, which has sought to unravel the nature of interaction between asbestos and smoking so that it is less ‘uncertain’, has often delved into the ancillary issue of whether lung cancer risk decreases with ‘time since the last exposure’.

Despite sharing similarities with mesothelioma, e.g. that both are long latency diseases, it has been speculated that the risk of asbestos-related lung cancer reduces with the cessation of exposure.

Research, conducted by the Health and Safety Executive (HSE) in 2011, analysed a large cohort of asbestos workers, between 1971 and 2005, who were monitored as part of The Great Britain Asbestos Survey.[v]

On this occasion, it was concluded that there was no significant difference in risk of lung cancer mortality for the ‘time since last occupational exposure to asbestos’ – see the lack of risk ratio fluctuation in the Poisson regression model, below. 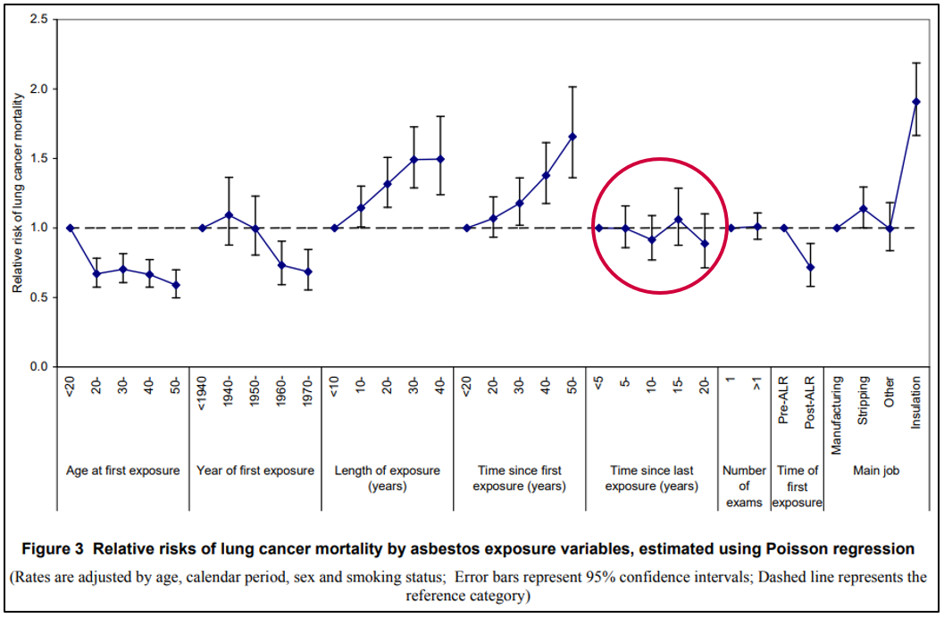 However, only a few months ago, in a journal article published in the International Archives of Occupational and Environmental Health, Boffetta et al (2019) claimed to have identified a ‘risk reversal’ for asbestos following the cessation of exposure. Interestingly, this ‘risk reversal’ was observed in lung cancer cases, after a 10-year interval since exposure ceased, but was not replicated in mesothelioma cases.[vi]

By equating mesothelioma and lung cancer risk ratios against one another, it can be surmised that this finding is heavily reliant on the assumption that incidence ratios of both conditions are comparable. While asbestos-related lung cancer to mesothelioma deaths are estimated to be in the ratio of 1:1 [Marinaccio et al (2008)[vii]], Doll and Peto (1985) commented that ratio of mesotheliomas and lung cancers produced by any given exposure to asbestos varies by ‘at least 10-fold’.[viii]

It is also important to note that the follow-up ‘cessation’ period was far from extensive, at just 10-years. In actual fact, the aforementioned HSE study recorded a brief decline in mortality ratio (see Figure 3 above) after a 10-year ‘cessation’ period, only to find that the downward trend was nullified after 15-years.

Järvholm and Åström (2014)[x] theorised that, if asbestos enhances the transport of tobacco carcinogens into epithelial (lung) cells (inferring a ‘multiplicative’ risk), cancer risk would decrease after asbestos exposure stops because fibres are ‘more rapidly cleared from the lungs’.

The Swedish authors remarked, in an investigation that included 2,835 cases of lung cancer among construction workers, that:

‘... workers with an increased risk of lung cancer during high exposure to asbestos have similar risk as low-exposed workers 20 years after the exposure has ended, but their risk of mesothelioma is still higher 20 years later. This indicates that the mechanisms of carcinogenicity for asbestos are different for lung cancer and mesothelioma’.

Should more confirmatory research emerge, the argument that lung cancer risk decreases with ‘time since last exposed to asbestos’ has the potential to be of great significance to defendants (and their insurers) in their defence of civil claims, or at least when mitigating quantum of damages.

If asbestos-related lung cancer claimants are life-long heavy smokers and allege that their historic exposure to asbestos exposure occurred during a condensed period of their youth and was proceeded by decades of non-exposure, it is foreseeable that courts could be persuaded (provided that the interaction between smoking and asbestos exposure is medically judged to be ‘additive’ or ‘multiplicative’) to deduct larger percentages from total compensation awards to better reflect the balance between contributory negligence and purportedly tortious exposure.