On 6 February, Senior Claims Professional at Travelers Insurance Company, Mark Rogers, shared news of recent success at a 3-day trial, in respect of an employers’ liability (EL) accident claim. The judgment of Grant v Newport City Council (2019), sections of which were posted on Gordon Exall’s Civil Litigation Brief,[i]  had the effect of dismissing the entire claim, on the grounds that the claimant had been ‘fundamentally dishonest’, by virtue of s.57 of the Criminal Justice and Courts Act 2015. 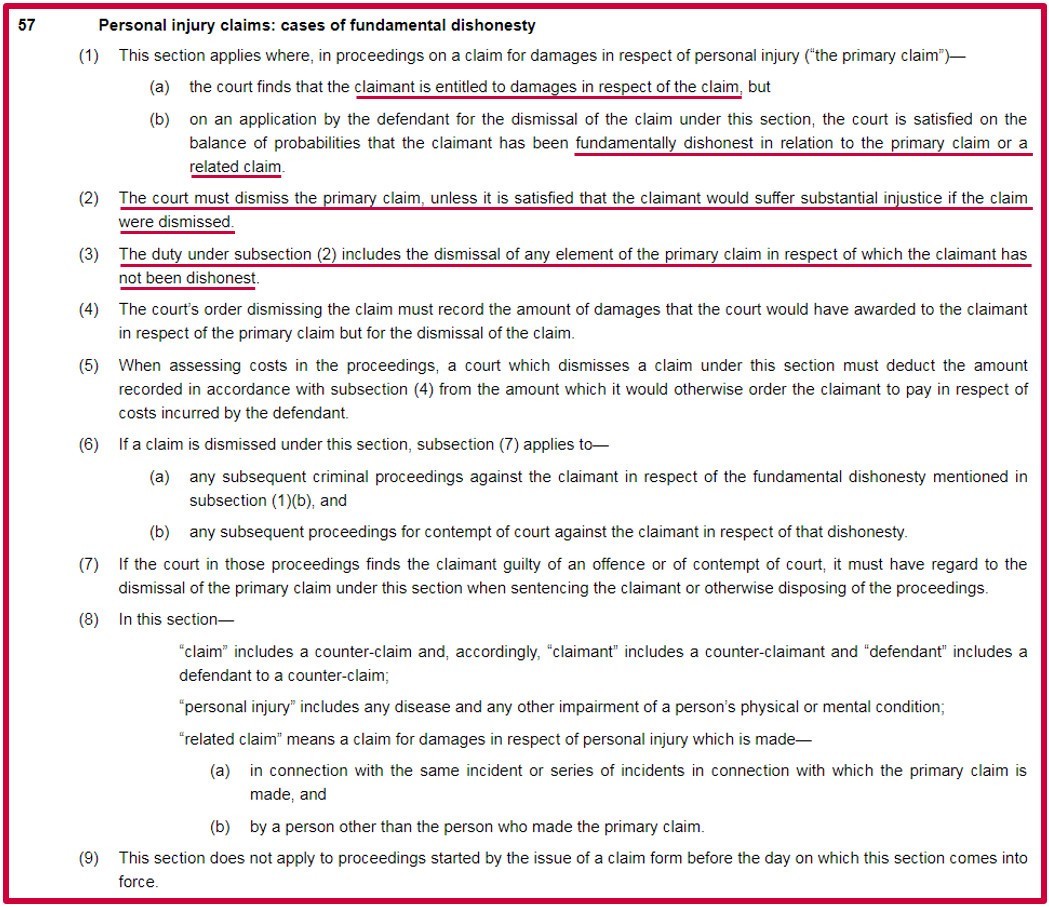 Legal action stemmed from a workplace accident, which occurred on 16 January 2014.

In the course of her employment with the defendant local authority, the claimant school cleaner was advised by a colleague to empty the contents of her mop bucket on the ground outside, as the commonly used indoor sink had been blocked. In so doing, the claimant slipped and fell on paving stones, sustaining ‘a significant injury’ to her right knee that required reconstructive surgery.

The claimant advanced a personal injury claim against the defendant, asserting that her right leg had given way because the paved area was still ‘suddy’ from the ‘build-up’ of other cleaners’ emptied buckets. Although the case was essentially pleaded in negligence and breach of statutory duty against the defendant, this was a vicarious liability case, i.e. the defendant was alleged to have been vicariously liable for a fellow employee’s negligent advice to empty the bucket in the presence of water poured externally by other cleaners.

In reply, the defendant contested liability and denied causation, alleging that the claimant may have lost her footing as a result of wearing ‘inappropriate’ footwear (she sought to distinguish the ‘slippers’ that she had worn at the time of the accident against those she had previously worn and been told were ‘dangerous’). Further, that she may have slipped on water emanating from her own bucket, making her the ‘victim of her own negligence’.

In this case, there were no first-hand witnesses to the accident, other than the claimant.

At trial, Her Honour Judge Howells accepted (at paragraphs 27 to 39 of the judgment), on the balance of probabilities, that the claimant’s account of the accident, as confirmed by the Health and Safety Executive-compliant Accident Report Form (which had made ‘no mention of slippers’), was ‘credible and reliable’.

As such, it was concluded that the claimant’s fall was ‘caused by her slipping on water caused by a spillage of it by a servant or agent of the defendants ... she had an accident which caused her injuries, and that was caused by the negligence, or breach of statutory duty, of the defendants. There was no contributory negligence in the circumstances ...’

In spite of this, the defendant also contested liability on the basis that the claimant had ‘consciously’ and ‘seriously’ exaggerated ‘the extent and the effects of the injury’, which amounted to ‘fundamental dishonesty’, within the meaning of both CPR 44 and s.57 of the 2015 Act.

Whilst the parties agreed that the accident had left the claimant disabled for a 12-month period (at least) up until surgery and for a period thereafter, there was disagreement over the extent to which the claimant had recovered physically.

However, the defendant relied on post-accident surveillance and YouTube evidence, which presented a ‘very different picture’ of the claimant that was ‘wholly inconsistent’ with her case. Ultimately, the defendant argued that the claimant was ‘lying’ about being ‘significantly disabled’ and not having carried out work after the accident. In so doing, she was pursuing damages that were ‘substantially fraudulent’.

3-days of surveillance video, which was reluctantly permitted by Mr Justice Birss, in Grant v Newport City Council [2018] EWHC 3813 Ch, ‘clearly’ demonstrated that the claimant was ‘operating at a reasonable level of functioning’ and ‘without obvious discomfort’. She was seen undertaking ‘heavy cleaning duties in relation to a car’ and ‘manoeuvring wheelie bins in an unwieldy fashion up steps’.

While the claimant confessed, in a prior witness statement, to having ‘good days and bad days’, HHJ Howells commented that her case was ‘not wholly contained in the witness evidence’.

When viewed in the light of medical evidence (valuation of special damages were increased from £50,000 to over £300,000 because of the expert’s report), the judge was led to the ‘inevitable conclusion’ that the claimant had been ‘dishonest’, in ‘deliberately misrepresenting’ the degree of her symptoms, in order to ‘deliberately exaggerate’ the value of her claim:

What is more, YouTube video evidence exposed the claimant for having failed to disclose that she had been actively involved in a business after her accident. The claimant was described as an ‘assistant’ and had received earnings, ‘albeit ... relatively modest’. Her ‘presentation’ and ‘non-disclosure’ of the business relationship had been ‘dishonest’.

On the overall question of ‘fundamental dishonesty’, the Circuit Judge remarked that Grant was factually similar to the landmark s.57 case of LOCOG v Sinfield [2018] EWHC 51 (QB) [summarised in edition 216 (here)], in that ‘this was an overstatement by the claimant that went to the heart and root of her claim’.

Accepting that the claimant had indeed been ‘fundamentally dishonest’ and that this was not a case of ‘innocent exaggeration’, she went on to conclude, at paragraph 105:

‘There has been no suggestion to me that there would be any injustice in itself for section 57 not to be applied. In all of the circumstances, I dismiss the claimant’s claim in its entirety, recognising that she loses, not only the dishonestly sought damages, but her honestly sought damages too’.

Had the claimant presented her claim honestly, she would have been entitled to receive £83,000 for ‘real’ and ‘significant’ injuries sustained as a result of the accident. On account of what could have been, Grant therefore represents a significant victory the defendant and its EL insurer.