In 2019, researchers at Yale University’s School of Public Health investigated the association between mobile phone use and cancer of the thyroid gland (located in the throat) and published their findings in the Annals of Epidemiology journal.[i]

N.B. The function of the thyroid gland is to produce and secrete hormones that regulate metabolism, heart rate, blood pressure and body temperature.[ii]

Overall, the study found no significant association between use of mobile phones and cancer. However, a non-statistically significantly elevated risk of thyroid microcarcinoma (a sub-type), among long-term (more than 15-years) and more frequent mobile phone users (more than 2-hours per day; most cumulative hours; most cumulative calls), was identified and earmarked as an area for future investigation.

Expanding on their body of work, the same group has, this month, published an article in the Environmental Research journal,[iii] which is believed to be the first of its kind to discuss the combined influence of genetic predisposition and mobile phone use (between 2010 and 2011), in relation to thyroid cancer development.[iv]

‘Our study provides evidence that genetic susceptibility influences the relationship between cell phone use and thyroid cancer. More studies are needed to identify populations who are susceptible to radiofrequency radiation (RFR) and understand exposure to RFR by different using patterns of cell phones’.

As was also the case with the previous investigation, there were approximately 900 test subjects, around 50% of whom had been histologically confirmed as having had the disease, while the remainder formed a population-based control group.

When conducting an assessment of genetic susceptibility, the researchers were interested in the importance of genetic variations in human DNA, called single nucleotide polymorphisms (SNPs). These are not to be confused with mutations, as they arise in at least 1% of the population. 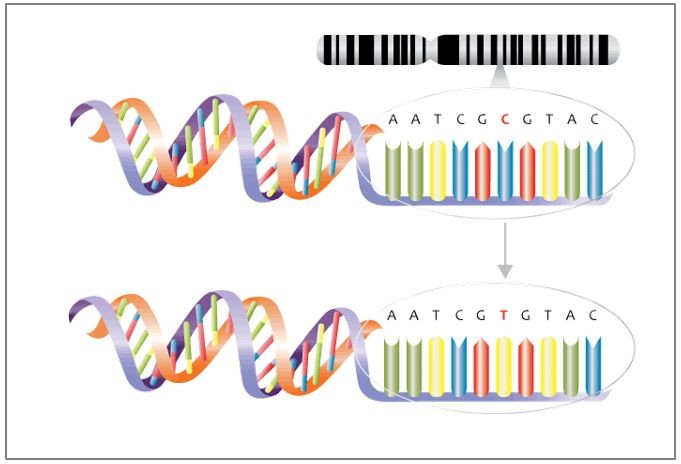 Having inspected 823 SNPs in 176 genes, it was pinpointed that 10 variations increased the risk of thyroid cancer, among mobile phone users. It was further identified that the risk of cancer was more than doubled among users with SNPs occurring in 4 of the genes examined.

How relevant are these findings?

Given that data on mobile phone use was collected from 2010 to 2011, when modern smartphones were first being introduced to the consumer market, it is likely that earlier generation mobile phones would have been more commonly used by the participants. Thus, it is highly probable that radiation discharged by precursor models was responsible for the increase in risk of thyroid cancer.

On this premise, Dr. Zhang has advised that the conclusions drawn should be re-evaluated in future studies, especially as the phased transition from devices with physical keyboards and keypads to devices with large finger-operated capacitive touchscreens,[v] which transpired during this time period, fundamentally changed the way that smartphones are used. For example, the balance has shifted from users predominantly making phone calls to texting, the latter of which does not require the device to be positioned in such close proximity to the body.[vi]

Will the findings resonate with the specialised cancer agency of the World Health Organization (WHO)?

In spite of the fact that The International Agency for Research on Cancer (IARC) concluded, in 2011, that ‘radiofrequency fields’ are only ‘possibly carcinogenic to humans’ (Group 2B), in edition 298 of BC Disease News (here), we reported that the Italian Courts had upheld a ruling that there is a ‘causative link’ between non-ionising mobile phone-emitted radiation exposure and brain cancer.

Whether or not the IARC chooses to alter its classification is yet to be seen.

Is there any evidence to suggest that the study findings would be replicated in the UK?

According to Cancer Research UK,[vii] thyroid cancer is the 20th most common cancer in the UK, with around 3,500 new cases recorded every year.

Primarily affecting 65 to 69-year-olds, there has been a 2.5-fold increase in thyroid cancer incidence since the early 1990’s and a 0.75-fold increase over the past decade. The same rate of increase is projected up to 2035, at which point it is estimated that there will be 11 cases per 100,000 people. 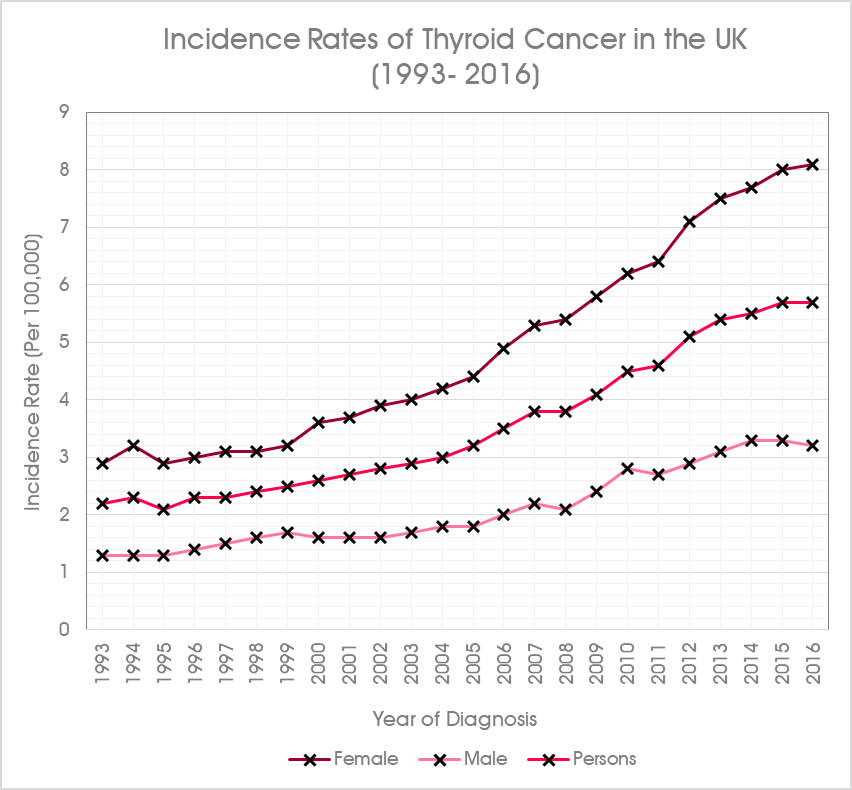 While incidence rates of thyroid cancer are on the rise in the UK (higher in females than in males), assumed cancer latency periods and the existence of multiple risk factors makes it impossible to confirm whether mobile phone use has contributed towards these statistics.[ix]