If a personal injury claimant is protected by qualified one-way costs shifting (QOCS) in 1st instance proceedings, can that claimant also rely on QOCS protection to restrict their liability for the costs of a subsequent appeal(s)?

This question was answered this week, by Lord Justices Baker, Hamblen and Holroyde at the Court of Appeal.[i]

Facts of the Case

For context, the procedural background to this case is best encapsulated as follows.

The claimant sustained bruising and facial lacerations after a plank of wood fell on his head at work.

Liability was admitted at Stage 1, but the parties could not reach settlement in the 35-day period allotted by Stage 2.

As such, a claim was filed under Stage 3, following the procedure set out in Practice Direction (PD) 8B.

Even though the defendant’s Acknowledgment of Service did not state an intention to contend jurisdiction, or take umbrage with the procedure followed, the defendant contended, at the Stage 3 hearing, that belatedly served witness evidence could not be relied upon.

Despite having rejected permission for the claimant to rely on the aforesaid evidence, District Judge James awarded the claimant £2,000 in damages and £1,080 in costs.

However, the claimant appealed, on the basis that, in accordance with PD 8B para 9, late service of evidence should have precluded the claim from continuing under the PAP.

Allowing this appeal, His Honour Judge Hughes QC set aside the original order for damages (plus costs) and dismissed the claim advanced under the PAP, thereby allowing the claimant to commence fresh Part 7 proceedings against the defendant.

The Circuit Judge ordered the defendant to pay the claimant’s costs of appeal (£4,500).

Counsel for the defendant submitted that PD 8B para 7.1 adequately dealt with the issue, as the defendant was merely ‘raising an objection [to the admissibility of the claimant’s evidence]’ and not ‘opposing the claim’.

If the Circuit Judge had been correct in his interpretation of PD 8B, defendants would consistently be left with the difficult choice of either:

Ultimately, Baker LJ, with whom Hamblen LJ and Holroyde LJ agreed, saw semblance with the defendant’s argument and determined that the defendant was not obliged to ‘oppose the claim’ and, in having ‘objected to the evidence’, the Court did not have to dismiss proceedings brought under the PAP.

Allowing the appeal, the Circuit Judge’s order for dismissal of the claim was set aside and DJ James’ ruling was restored.

The Defendant’s Application for Costs

Following the decision of the Court of Appeal, the defendant applied for an order that the claimant pay the costs of both appeals.

Baker LJ was not persuaded that the court should exercise its discretion, under rule 52.19(1), to make an order limiting the recoverable costs of the appeal in ‘any proceedings in which costs recovery is normally limited or excluded at first instance’, i.e. proceedings at 1st instance under the PAP.

In this case, the claimant had sought to overturn DJ James’ order by relying on his own failure to comply with the procedural requirements of the PAP. However, this pursuit was deemed to be ‘wholly unmeritorious’, at the expense of ‘unnecessary additional costs’. The claimant had essentially gone full circle.

As such, the defendant was entitled to costs incurred in both appeals.

However, the order reflecting this would be subject to the QOCS regime and was not enforceable (beyond the £2,000 damages order made by the 1st instance Judge?).

In so ruling, the Court of Appeal followed Parker v Butler [2016] EWHC 1251 (QB), in which Edis J construed that ‘proceedings’, for the purposes of CPR 44.13 and the scope of QOCS protection, extend to include both the 1st instance proceedings and any subsequent appeal:

‘As Edis J observed at paragraph 3 of his judgment in Parker v Butler, if a claimant's access to justice is dependent on the availability of the QOCS regime, that access will be significantly reduced if he is exposed to a risk as to the costs of any unsuccessful appeal which he may bring or any successful appeal a defendant may bring against him’ [para 29 of Blair]. 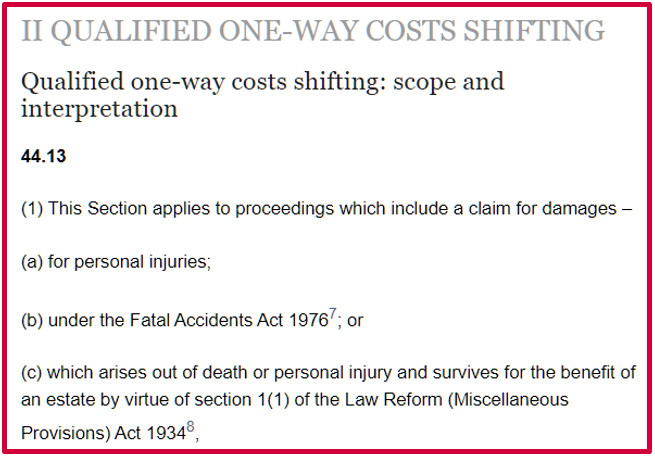