The Judicial College Guidelines (15th Edition) – What Has Changed?

Over the course of the winter break, the 15th edition of the Judicial College Guidelines for the Assessment of General Damages in Personal Injury Cases (JC Guidelines) was published. In this feature article, therefore, we seek to compare the newest edition against the previous edition by mirroring the format employed in issues 20 (here), 114 (here) and 201 (here) of BC Disease News.

THE LEGAL STATUS OF THE GUIDELINES

We must reiterate that the status of the Guidelines is only that of guidance – they are not enshrined by law and can be departed from if the circumstances of the case so require.

As evidence of this, Mr. Justice Holland noted, at paragraph 7 of his judgment in Cameron v Vinters Defence Systems Ltd [2007] EWHC 2267, that the Guidelines provide the starting point, but judges may deviate from this position, providing that said deviation can be justified:

‘Turning myself into a jury, my starting point has to be the Guidelines — I can depart from such, but only with justification. I remind myself of the point made by David Foskett QC sitting as a High Court Judge: “… it is an invidious exercise to draw fine distinctions between the suffering of victims of mesothelioma. It is a most dreadful terminal disease with extremely painful and distressing symptoms. That consideration remains whether those symptoms have been endured over merely a matter of months or for a year or longer.”’

Accordingly, the facts of the case must be regarded as the ultimate determinative factor in any award of damages.

HOW DO SUCCESSIVE EDITIONS OF THE GUIDELINES DIFFER?

Successive editions of the Guidelines reflect new decisions on quantum and changes in policy. They also reflect inflationary changes, which means that it is commonplace for figures to increase with time.

It has been 2-years since the publication of the 14th edition of the Guidelines.

As such, any increases found in the 15th edition will be a reflection of changes realised during this period. The latest edition also continues to include an additional column of figures that represent the 10% uplift in general damages, as was recommended by Sir Ruper Jackson and endorsed by the Court of Appeal in of Simmons v Castle [2012] EWCA Civ 1039.

TABLES OF COMPARISON BETWEEN THE 14TH AND 15TH EDITIONS

In this – the main section of the feature article – we provide a tabular comparison between the 14th and 15th editions of the Guidelines. Brackets most relevant to the disease market were subjected to this analysis.

N.B. In each table, we have provided a 5th and final column, which calculates the percentage and pounds difference between each edition’s figures (including the 10% uplift), at the upper-end of the award for each disease bracket.

The Guidelines for asbestos related diseases feature in Chapter 6(C). The table below shows a comparison between the previous edition and the new edition:

The following observations may be made.

Moreover, there has been no change to this Chapter’s bracket structure, which notably consolidates pleural thickening and asbestosis.

The only modification of the 14th edition’s Chapter 6(C), which is apparent in the 15th edition, is that the mesothelioma bracket adds further clarification on appropriate levels of quantum, in respect of ‘extremely short periods of symptoms or very elderly claimants’:

‘Most reported decisions other than those involving extremely short periods of symptoms or very elderly claimants fall within the middle and upper parts of the bracket’.

It is evident from the table above that each bracket has increased in value by 7.0% exactly, versus the 14th edition.

The Guidelines for asthma are presented in Chapter 6(D). Our table compares the previous edition with the new edition: 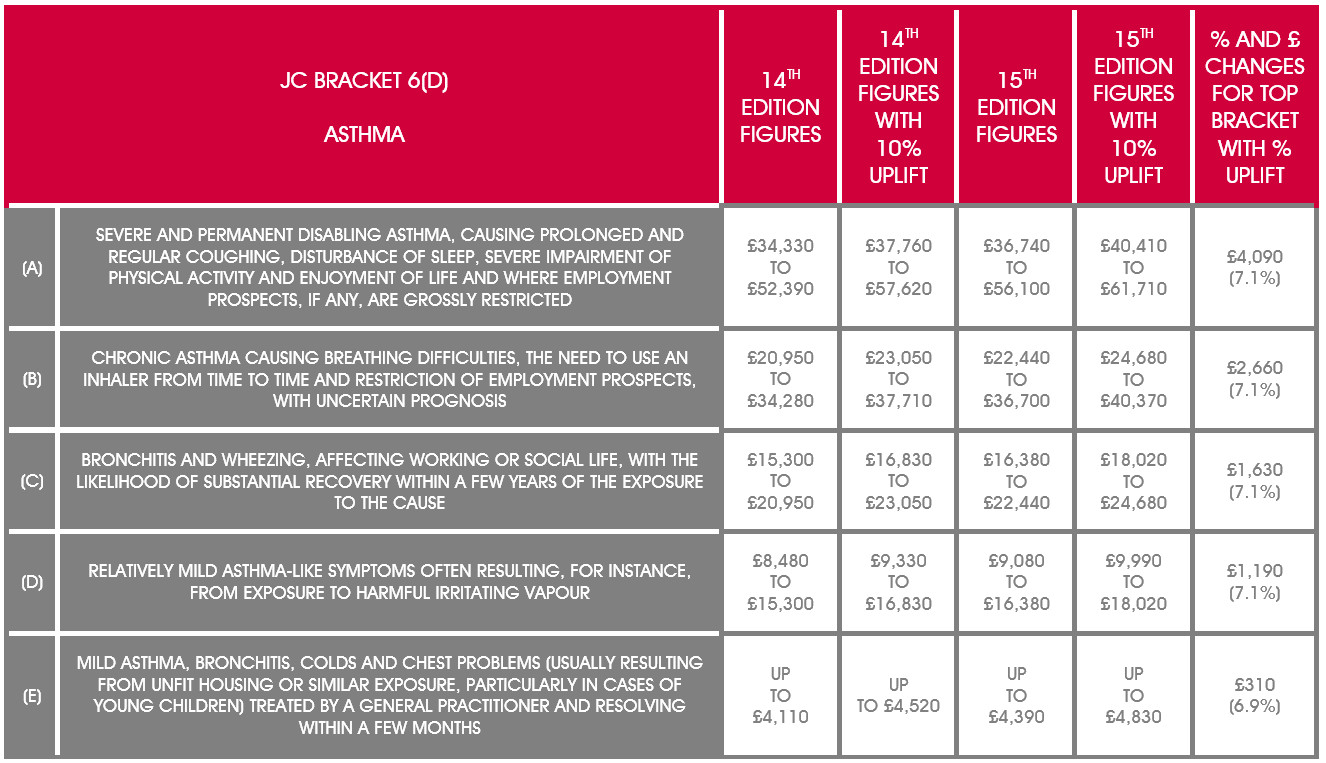 The narrative of this bracket remains unchanged in the 15th edition, which means that the figures in the table exhibit inflationary changes alone.

It is noticeable that the increase in damages for the mildest form of asthma [Chapter 6(D)(e)] is 0.2% lower than the increase realised by the brackets which represent more severe symptoms.

General Damages for Deafness and/or Tinnitus

The Guidelines for deafness/tinnitus are accessible in Chapter 5(B)(d). The following table shows demonstrates how the figures have changed from the previous edition to the new edition: 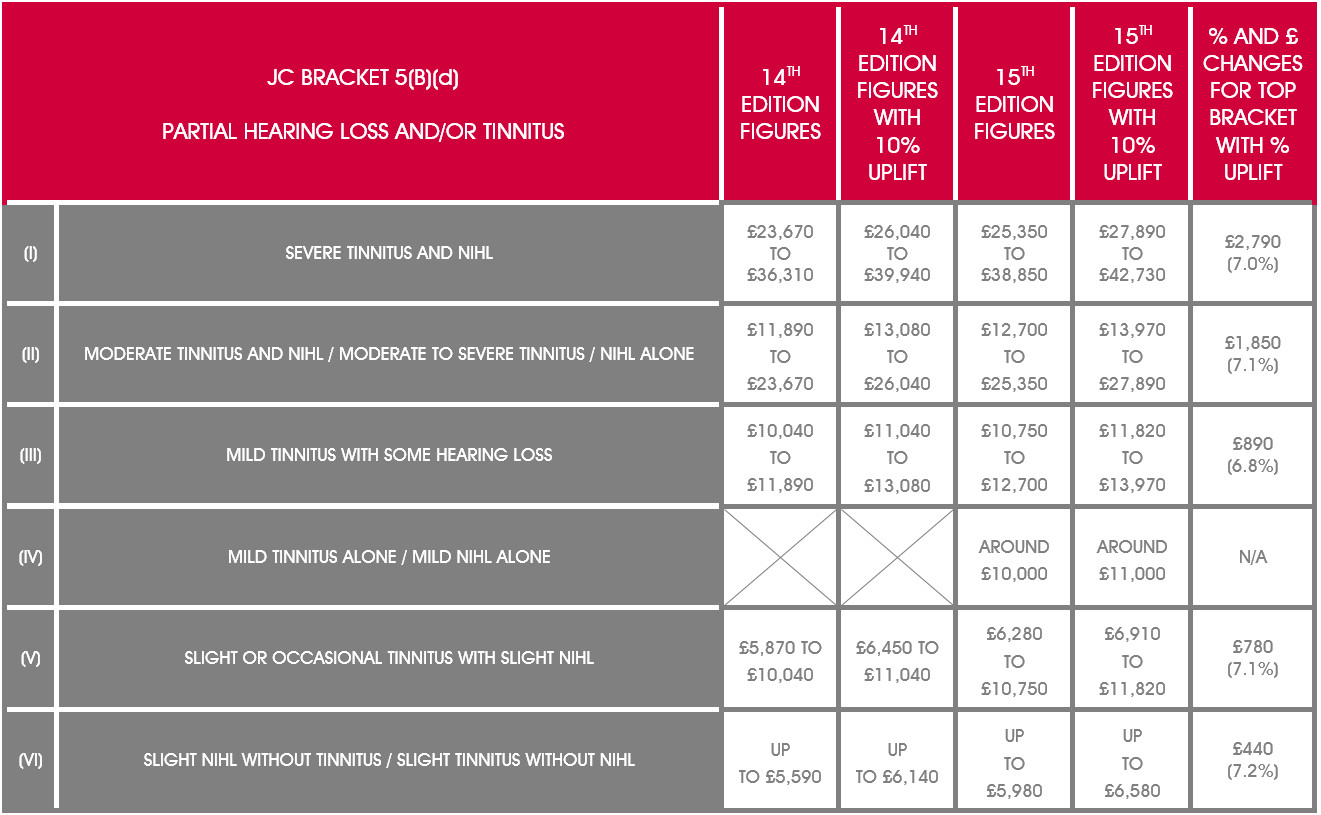 As with most bracket comparisons, the 15th edition conveys inflationary changes within Chapter 5(B)(d).

However, there has been a significant amendment to the narrative of the text accompanying the brackets.

In the 14th edition, there were 5 brackets dividing partial hearing loss and/or tinnitus. Remarkably, there are now 6 brackets, as the 15th edition of the Guidelines inserts ‘Mild tinnitus alone or mild NIHL alone’.

The Judicial College has intimated that claimants alleging these symptoms will be eligible for an award of around £10,000 (£11,000 with 10% uplift), which is at the upper end of ‘Slight or occasional tinnitus with slight NIHL’ bracket.

Will this lead to a spike in ‘tinnitus only’ claims?

We will we continue to monitor the effects of this change in the year ahead.

General Damages for Back Injuries

The Guidelines for back injuries are visible in Chapter 7(B). The table below equates the previous edition with the new edition: 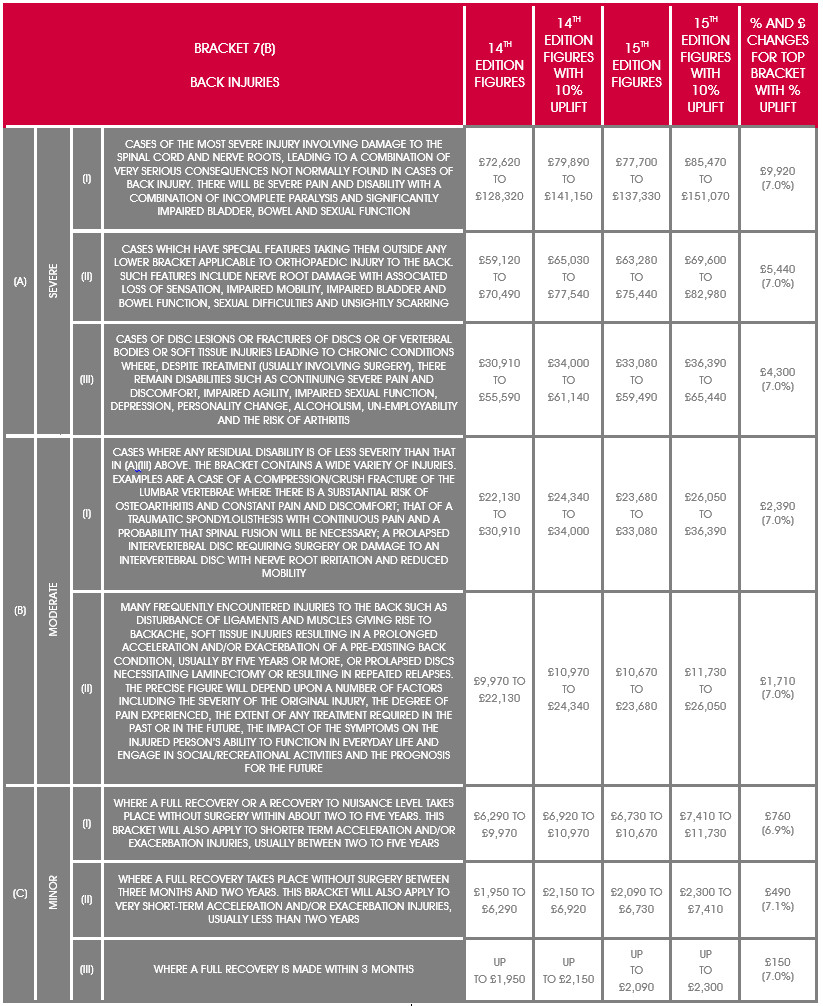 In edition 201, we reported that the 3-month recovery for minor back injuries [Chapter 7(B)(c)(iii)] had been carried over into the 14th edition, since having been reformed in the 12th edition.

While this particular bracket was unchanged in the 14th edition, the same cannot be said for the 15th edition, as the narrative of every degree of back injury, i.e. severe, moderate and minor, has been edited to encompass fracture injuries. Chapter 7(B)(c) now reads:

The Guidelines for dermatitis are located in Chapter 12. We measure up the previous edition and the new edition in the table below:

The 15th edition maintains the additional ‘short-lived aggravation of a pre-existing skin condition’ bracket, which was added to Chapter 12(C), in 2017.

The Guidelines for general psychiatric damage can be found in chapter 4(A). Our table portrays the extent to which the previous edition resembles the new edition:

For this type of injury, new, 15th edition factors to be taken into account include:

In regards to moderate cases [Chapter 4(A)(c)], the latest edition of the Guidelines obligingly appends that:

‘Cases of work-related stress may fall within this category if symptoms are not prolonged’.

The Guidelines for post-traumatic stress disorder are clearly established in Chapter 4(B). The table below illustrates the parallels between the previous edition and the new edition:

The Guidelines for this Chapter are compiled by reference to cases which reflect the criteria established in the 4th and 5th editions of Diagnostic and Statistical Manual of Mental Disorders (DSM-IV-TR and DSM-5). The same could be said for previous editions of the JC Guidelines, denoting that the only changes in the update are inflationary.

The Guidelines for vibration white finger (VWF) and / or hand arm vibration syndrome (HAVS) are laid out in Chapter 7(J). To see what adjustments have been made in the new edition, see the table below:

As was also the case in edition 201, there have been no significant changes to this category; the brackets emulate inflationary changes. In addition, there have been no changes to the narrative text accompanying the brackets. The highest guideline award in the most serious of cases is £36,060 (with the 10% uplift). Whereas, the lowest award in the most minor of cases is now £2,560 (without the 10% uplift).

General Damages for Other Diseases

Numerous tables in this section evaluate the variance between the previous edition and the new edition, in respect of the remaining brackets that are especially relevant to disease litigation. These have been provided without paragraphs of scrutiny, as the only changes to speak of have been inflationary. 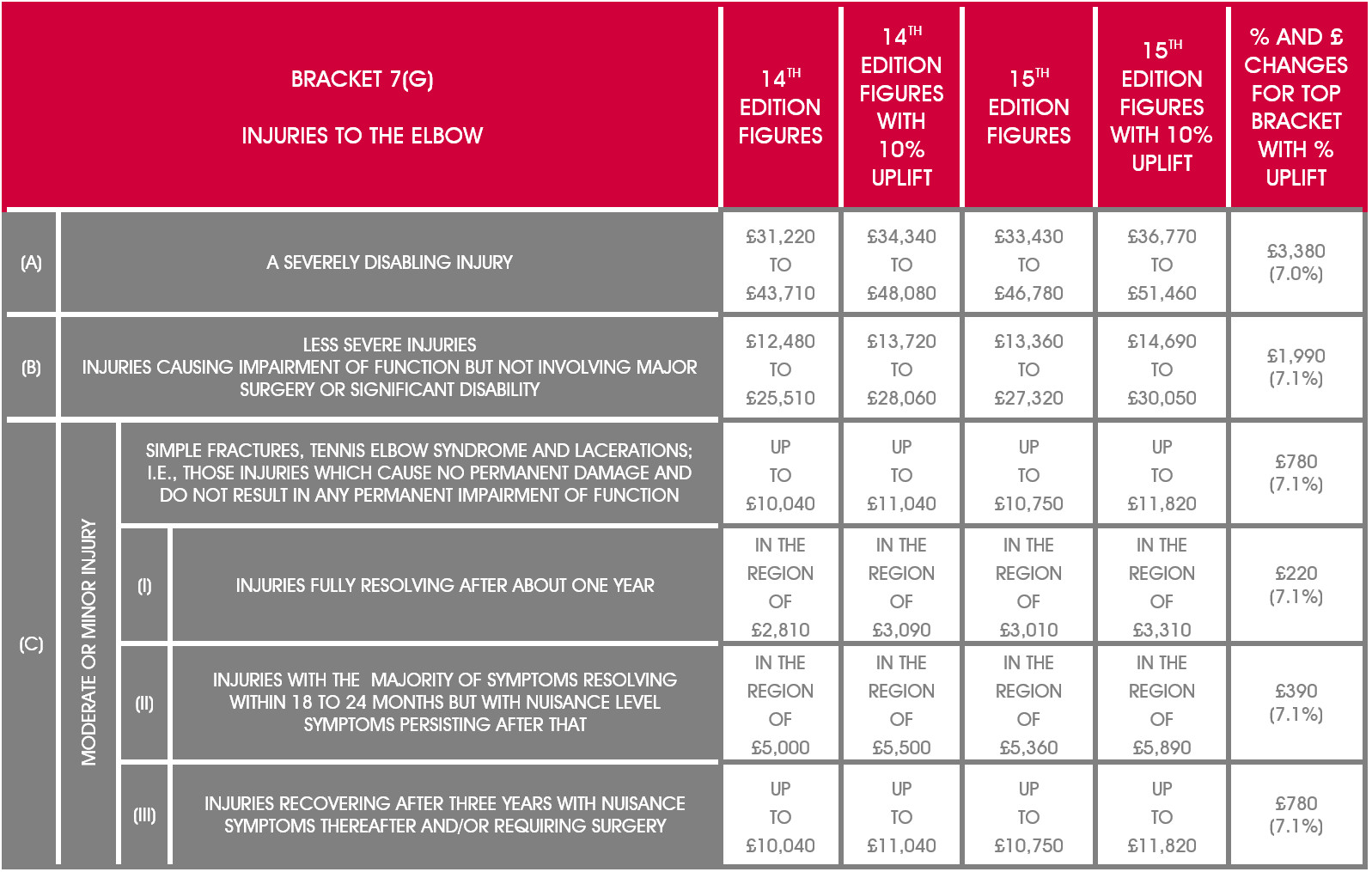 N.B. The Guidelines state that the presence of an overlapping psychiatric injury is commonplace in chronic pain cases.

As was also the case in the 14th edition of the JC Guidelines, there have been modest increases in the 15th edition. These increases, as is evident from the tables above, have been in the region of 7.0%.

This is more than double the average RPI inflation over the past 2-years (3.0%).[ii]

It also surpasses the 5.0% increase in general damages measured from the 13th edition to the 14th edition, in issue 201 of BC Disease News.

The 15th edition continues to separate the figures between ‘pre-uplift’ and ‘uplift’ awards, as the former are likely to remain relevant throughout the lifetime of this edition.

Despite there being relatively few changes implemented through the 15th edition of the Guidelines, the authors do note that there will be a thorough review of the Guidelines by the editorial team over the next 2-years.

Interestingly, the introduction to Chapter 7 of the Guidelines takes into consideration the looming Civil Liability Act 2018 reforms on road-traffic accident (RTA) claims and the planned introduction of a fixed tariff scheme for whiplash injuries. It explains the impact of the scheme on the application of Guideline figures, as follows:

‘The Civil Liability Act 2018 (‘the Act’) received royal assent in December 2018. Part 1 of the Act provides for the introduction of a fixed tariff scheme for general damages awards for whiplash injuries (and including minor psychological injuries) lasting for up to two years as a consequence of a road traffic accident. At the time of publication of the 15th edition of these Guidelines, the provisions of Part 1 of the Act are not yet in force. The current intended implementation date is April 2020. Whenever in fact implemented, it is understood the new tariff regime will apply only to accidents occurring after that date. The guidelines set out below will then cease to apply to those cases caught by the Act. A definition of injuries will be contained in the Act and any accompanying Regulations. The tariff will not apply to claims brought by motorcyclists or their passengers, cyclists, pedestrians, or other road users who are not using a mechanically propelled motor vehicle. Readers will need to refer to the legislation and Regulations to determine whether and to what extent individual cases come within the scope of the new legislation and for details of the applicable tariff’.