Why is Tinnitus Playing an Ever-Dominant Role in ‘Common Whiplash’ Claims?

Tinnitus is a subjective acoustical phenomenon, which is perceived without having an extrinsic source of sound. It is commonly associated with noise-induced hearing loss (NIHL), i.e. inner ear damage, but the exact cause(s) of tinnitus is unknown.

However, an unambiguous tinnitus spike in low-impact, run-of-the-mill whiplash claims begs the question, why was tinnitus seemingly less prevalent in years past?

Crowe first coined the term, ‘whiplash injury’, in 1928.[i]  In the same decade, Barre and Lieou both referred to tinnitus as being the most frequent symptom in patients presenting with cervicospinal injuries, but the earliest example of this connection dates back to 1843 and Terret.[ii]

Whiplash injuries occur as a result of violent movement of the head with forceful extension (away from the body, i.e. tilting head back and looking to the sky) and flexion (towards the body, i.e. tucking the chin into the chest) of the neck, thereby resulting in cervical spine and soft tissue injuries.

Gay and Abbott (1953) were the first to cite ‘rear end’ RTA as ‘common whiplash injury’.[iii] Although RTA can, of course, involve ‘lateral’ or ‘front-end’ collisions. 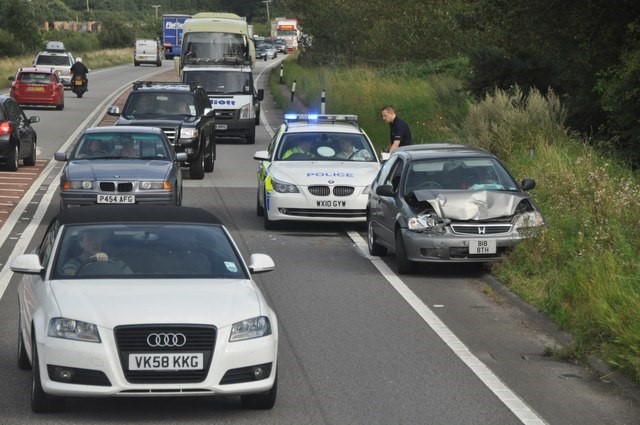 WHY DO RTA CAUSE WHIPLASH?

Drivers are legally obliged to wear seat-belts as a safety precaution against the infliction of ‘direct wounds’. However, if a driver has a surprise collision with another vehicle whilst wearing a seat-belt, the energy transmitted and absorbed by the head and neck, on impact, is greatly increased (but less severe if the headrest is adequately positioned). This is because seat-belts limit the movement of the thorax (chest) and therefore increase the extent to which the head can move, in relation to the rest of the body.[iv]

Inertia, experienced by abrupt hyperextension and hyperflexion of the neck, is considered to be the ‘whiplash injury mechanism’.

Clinical manifestations of whiplash injuries have been termed ‘whiplash-associated disorders’ (WAD). Spitzer et al. (1995) commented that WAD can include auditory disorders, such as tinnitus.[v]

Around 80% of whiplash victims will recover from their injuries in a matter of months. However, Claussen and Claussen (1995) observed ‘so-called late whiplash injury syndrome’ (LWIS) in 15% to 20% of approximately 200,000 whiplash patients.[vi] Balla (1980) defined LWIS as ‘a collection of symptoms and disabilities seen more than six months after a neck injury occurring in a motor vehicle accident’.[vii]

Incidentally, the majority of LWIS sufferers complain of ‘cervico-encephalic syndrome’, a post-traumatic syndrome of whiplash, which was heavily linked with tinnitus by Chetana and Claussen (2010). [viii]

HOW COMMON IS TINNITUS IN WHIPLASH SUFFERERS?

Oosterveld et al. (1991) observed tinnitus in 14% of 262 whiplash patients, who were subjected to ‘trifle-and minor-traumas’.[ix] Elsewhere, Tranter and Graham (2009), in a later review of oto-vestibular symptoms following whiplash injury, calculated incidence of 10%, further noting that this is open to exaggeration [see 41% tinnitus in Decher (1996)[x]].[xi] In spite of this, Rowlands et al. (2009) discovered significantly lower rates of tinnitus among patients with low-grade whiplash injuries.[xii]

HOW COMMON IS WHIPLASH IN TINNITUS SUFFERERS?

Conversely, in a sample of 1,604 Tinnitus Research Initiative (TRI) participants, Kreuzer et al. (2012) identified whiplash-induced tinnitus in only 4.9%, which was described as a ‘small subsample’.[xiii] By contrast, Folmer and Griest (2003), who surveyed tinnitus patients in a Canadian clinic, observed a history of whiplash injury in more than 10%.[xiv]

These studies emphasise that the origins of tinnitus are wide-ranging and cannot simply be attached to whiplash injuries without first conducting detailed investigations (e.g. into occupational history/lifestyle, etc.).

Inertia experienced during a motor accident, as briefly explained above, causes hyperflexion and hyperextension of the neck, which is supported by vertebrae in the cervical spine. Stress endured by this portion of the spine, during a road-traffic collision, can theoretically lead to micro- and macro-traumas of muscles, tendons, intervertebral discs, ligamentous structures and the spinal cord.[xv]

Does the medical literature suggest that musculoskeletal damage of this kind is associated with tinnitus?

Volle (2000) asserted that increased axial rotation of the upper cervical spine can cause tinnitus.[xviii] The same author published a paper, several years prior, which also conveyed a strong correlation between injuries of the craniocervical joint (CCJ) complex (upper segment of the cervical spine) and tinnitus.[xix]

What is more, Steilen et al. (2014) discussed that when capsular ligaments (fibrous tissue that strengthens joints) are injured, they become elongated and exhibit laxity and instability. All that may be required is a single macro-trauma, sustained in the course of a whiplash injury. If damage occurs in the cervical spinal region, cervical vertebrae will move excessively. Further, if this occurs in the upper cervical spine (C0-C2), sufferers may report tinnitus.[xx]

Similarly, hyperextension and hyperflexion of the neck has the natural biomechanical consequence of violently opening and closing the jaw. Rapid elongation and compression of the temporomandibular joint (TMJ) may promote tinnitus.[xxi] Kolbinson et al. (1997) commented that TMJ was more prevalent in whiplash victims than in a control group.[xxii]

Another physiological pathway to tinnitus was investigated by Kaute (1998), who simply assumed that the irritation and tension of posterior cervical muscles, caused by whiplash, has the propensity to over-stimulate the vestibular nuclei in the brainstem; an origin of idiopathic tinnitus. As a result, he championed atlas therapy as a means to normalise the flow of information sent to the brainstem and overcome tinnitus.[xxiii]

Elsewhere, Bhatt and de Carpentier (2012), in a novel case study, analysed the presence of bilateral tinnitus, triggered by whiplash-induced hyperextension neck injury in a low-speed road traffic accident. [xxiv] When asked to describe the tinnitus, the 70-year-old patient compared the sensation to orchestral music, which was familiar to him (‘Chorus of the Hebrew Slaves’, from the opera Nabucco, by Verdi). The study authors concluded that this was the first published case of musical hallucination precipitated by whiplash injury – a previously unreported phenomenon. Is this an under-reported condition?

Perhaps the most relevant research on this topic was undertaken by Claussen and Constantinescu (1995). 73 out of 91 LWIS cases, without contact trauma (i.e. no direct knock of the head and/or neck against a hard surface inside of the car), were affected by ‘subjective tinnitus’. The authors went on to affirm that ‘even the simple, non-contact whiplash injury can be the cause of long lasting, chronic poly-sensorial disturbances’, which closely intertwine with tinnitus.[xxv] They also recognised ‘degenerative cervico-spinal injury syndrome’ as an instigating factor, as well as vascular disturbances in the posterior cranial fossa, due to a narrowing of the vertebral artery in the cervical spinal region.

All things considered, there would appear to be some clinical validation, based on how musculoskeletal changes interact with brain functioning, that tinnitus could be characteristic of ‘common whiplash injury’, e.g. low-impact motor accidents. Indeed, neck pain is the most common symptom described after whiplash injury mechanisms and is reported in 88% to 100% of cases, depending on the study, say Vibert and Häusler (2003).[xxvi]

However, tinnitus is a subjective condition, which makes true prevalence so very difficult to accurately estimate – hence the variation across a spectrum of research papers. One can only speculate.

HOW GENUINE IS THE TINNITUS SPIKE IN RTA CLAIMS?

Could it be the case, instead, that claimant personal injury solicitors are, in fact, encouraging claimants to exaggerate their ‘common whiplash injury’ symptoms, in order to inflate medical expert fees and schedules of loss?

With an increased small claims limit (up to £5,000) and whiplash tariff system looming, monosymptomatic (i.e. mild soft-tissue damage only) RTA claims allocated to this broadened track may no longer be profitable for claimant legal representatives, in the absence of costs recovery.

By tying in other co-morbidities, such as tinnitus, the claim value can be increased to fast track levels and beyond. Damages exceeding £25,000 would fall outside of the fixed costs regime, at least until the Government decides to institute Sir Rupert Jackson’s proposals.

For example, see Quittance Legal Service’s article on a £16,574 order for damages, awarded to a low-impact whiplash claimant, who rated his tinnitus as ‘4 on a scale of 1 to 10, 10 being the most severe’.[xxvii]

Nonetheless, this year has seen a surge in findings of ‘fundamental dishonesty’, under s.57 of the Criminal Justice and Courts Act 2015, and an increased appetite for insurers to commence civil contempt proceedings. The legal system is finally getting to grips with fraudulent claims, yielding dismissed claims, recovery of legal fees through qualified-one-way costs shifting (QOCS) disapplication, orders for wasted costs and punitive fines.

Claimant solicitors should therefore be wise to a higher risk of professional negligence and decreased success in advancing standard RTA claims, if an additional tinnitus element is anything but wholly authentic. ‘Exaggeration’ alone can render a claimant ‘fundamentally dishonest’ and invalidate the claim in its entirety – read our precis of LOCOG v Sinfield [2018] EWHC 51 (QB) (here).

Stuart Bacon, Head of BC Legal’s Southend Office, gives his view, below:

‘Whether genuinely or otherwise, it seems tinnitus is going to be an increasingly common feature of soft tissue RTA claims.

General damages for tinnitus are not insignificant:

Note the dramatic difference in general damages between, “slight” and “moderate tinnitus”.

As disease lawyers we are more than familiar with arguments over the grading of tinnitus and the range of expert medical opinion that commonly exists in this regard.  Will we now see these arguments and the expense of such in RTA claims?

I question whether tinnitus should, in a medico-legal context, be diagnosed and causally attributed by experts typically instructed in RTA claims i.e. GPs, A&E Specialists and Orthopaedic surgeons.  If not, are we going to start seeing the complex causation and grading arguments from NIHL claims in RTA claims? Will the Courts entertain expensive expert ENT evidence?

On one hand I feel the Courts will do all they can to deter ENT evidence in RTA claims but on the other, I can see an approach similar to that seen in NIHL claims, which regularly sees both parties armed with their own expert ENT evidence.   It is now judicially accepted that, despite their modest value, NIHL claims involve complex issues of causation to the extent that Defendant ENT evidence is considered appropriate in all but the most straightforward of claims.

Insurers and the Courts will be far from keen to see ENT evidence in RTA claims, but if claims are made, which they now appear to be in increasing numbers, both are going to have to decide how to proceed.

To simply pay the claims will require insurers to accept diagnoses from medico-legal experts who have little to no clinical experience of diagnosis and quantification of tinnitus and pay damages on top of awards for soft tissue injuries.  With general damages for tinnitus starting at £6,140, this is likely to be an unattractive option and perhaps justification of the ~£1,000 spend on expert ENT evidence.

However, as we have seen in NIHL claims, there is likely to be a range of expert opinion on causation and grading of tinnitus so the ~£1,000 could well become ~£2,000 if two ENT experts provide evidence.

For insurers, tinnitus will certainly add an unwelcome dimension, complexity and costly element to RTA claims at a time when such claims are finally becoming more manageable.

In my view, a ‘head in the sand’ approach on this has the potential to lead to unhelpful and costly precedent and insurers would be wise to bring in the expertise of their NIHL claims  handers to work with their RTA handlers.

If these claims litigate and at least until the Courts provide some clarity on this issue, I think it would be beneficial to have disease lawyers involved.  Naturally, BC Legal will be more than happy to assist’.

[i] Crowe HE. Injuries to the cervical spine. Paper presented at the meeting of the Western Orthopaedic Association, San Francisco; 1928.