On 17 March 2022, The Dust Diseases Tribunal of New South Wales recognised silica-related lymphadenopathy (enlarged lymph nodes) as a pathological condition of the lungs that is attributable to dust.

The plaintiff, in Badenoch v Granite Transformations Pty Ltd [2022] NSWDDT 1, sued four defendants, alleging that they all, at various times, supplied engineered stone bench top products which exposed him to silica dust. He also alleged that he had performed work for the 1st defendant.

Provisional damages were sought, under s.11(1) of the Dust Diseases Tribunal Act 1989 (NSW), for:

According to the Australian state Act, qualifying for damages for ‘dust-related conditions’ requires an applicant to have, pursuant to s.3, either: 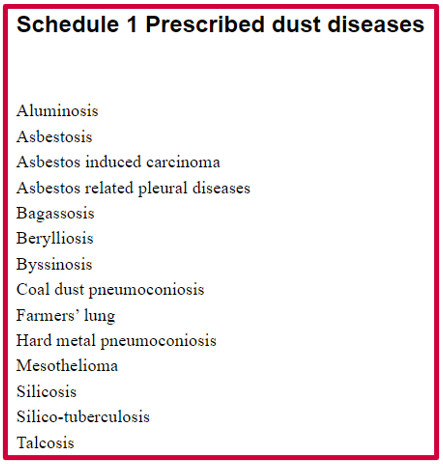 Given that the plaintiff did not have silicosis (a prescribed dust disease), jurisdiction to hear the claim necessitated the plaintiff to prove that at least one of the four asserted conditions was a pathological condition of the lungs, pleura or peritoneum attributable to dust.

Medical experts, Dr. Edwards and Dr. Slaughter (a specialist radiologist), observed CT scans of the plaintiff’s chest. In their respective reports, they both established lymphadenopathy, this being a condition of the lymph glands which resulted in the claimant presenting with a number of bilaterally and moderately enlarged mediastinal and hilar lymph nodes (‘lung nodules’), measuring up to 18mm in diameter. These lymph nodes were stable in appearance and there was no evidence that they were calcified.

While Dr. Slaughter remarked that lymphadenopathy is a common feature of sarcoid lymphoma, inflammatory lung conditions [e.g. chronic obstructive pulmonary disease (COPD)] and pulmonary silicosis cases (tuberculosis too), no such pathologies were exhibited by the plaintiff. Indeed, no radiological evidence of significant interstitial lung disease was identifiable in his CT scans.

However, in patients with a history of silica exposure, there have been reports of lymphadenopathy existing without signs of lung disease. In the extant case, no cause besides allegations of extensive occupational exposure to large quantities of silica dust were offered and hence, was ‘in keeping’ with a ‘silica-related lymphadenopathy’ diagnosis.

Both experts went on to cite an academic paper, published in 2009, entitled ‘Silicosis in the Lymph Nodes: The Canary in the Miner?’,[i] whose Abstract concluded as follows:

‘Our results are consistent with silicosis potentially occurring in lymph nodes before the parenchyma. Lymph node damage could impair silica clearance and increase the risk for parenchymal silicosis’.

Although the significance of enlarged lymph nodes occurring in silica exposed patients without lung disease is not fully understood, the objective of the study referred to was to ‘investigate evidence that lymph node silicosis can precede parenchymal silicosis’ and it did indeed confirm this risk. The science on whether lymphadenopathy can be a precursor to progression to pulmonary silicosis is uncertain, though.

On the basis that hilium (the site of hilar lymphadenopathy) is located within the boundary of the lung and therefore forms part of the lung (subject to further determination at trial), the plaintiff submitted that his lymphadenopathy was a ‘pathological condition of the lungs that is attributable to dust’.

The presiding District Court Judge agreed, deeming that his evidence supported an arguable claim, which, if validated at a final hearing (where expert evidence will be tested), would meet the definition of a ‘dust-related’ condition, under in s.3 of the 1989 Act, and thus be justiciable, owing to s.11(1).

Judgment in Badenoch calls into question whether silica-related lymphadenopathy, as a pathological condition in its own right, might constitute an ‘actionable injury’ in England and Wales, especially in light of recent claims that silica is the ‘next asbestos’ – see edition 307 of BC Disease News (here).

More directly, the question is whether an evaluation of the case law on de minimis non curat lex would liken silica-related lymphadenopathy to asbestos-related pleural plaques (non-actionable[ii]), or platinum salt sensitisation (actionable).

At paragraph 47 of Lady Black’s judgment in Dryden and others v Johnson Matthey Plc [2018] UKSC 18, she found that, while pleural plaques and sensitisation were both ‘markers’ of exposure, the latter constituted a change of ‘physiological make-up’, whereas the former did not.

If silica-related lymphadenopathy does not give rise to any actual or prospective disability, i.e. does not necessarily lead to or contribute towards any condition which produces symptoms, even with further exposure to silica dust, then it would not be regarded as an ‘actionable injury’. This is because sufferers of such a condition would not have endured a loss of bodily function, would not have lost part of their capacity to work and thus ought not to change their everyday lives so as to avoid additional exposure.

In Badenoch, the plaintiff’s lymphadenopathy caused no impairment in lung function (symptomless?) and the Judge highlighted that the science on lymphadenopathy being a precursor to later development of silicosis lacks certainty.

Unless and until the aetiology/pathophysiology of silicosis[iii] is clarified, the legal position on whether silica-related lymphadenopathy amounts to an ‘actionable injury’ is still up for debate.