In personal injury (PI) proceedings where qualified one-way costs shifting (QOCS) applies, a defendant’s ability to enforce costs orders against its opponent may be constrained (besides where CPR 44.15 or CPR 44.16 exceptions apply) in several situations:

This is ultimately because CPR 44.14(1), which sets out the effect of QOCS on orders for costs made against a claimant, clearly states that a defendant may, without the permission of the court, only enforce costs up to the level of ‘damages and interest made in favour of the claimant’, where settlement without a court order (e.g. by Part 36 Offer or Tomlin order) cannot be construed as ‘damages and interest’ [see Cartwright v Venduct Engineering Ltd [2018] EWCA Civ 1654.

In practice, what this means is that a defendant’s order for costs can be enforced (either partially or in full), pursuant to CPR 44.14(1), only where court ordered damages have been awarded, apart from ‘where the claimant’s claim has been struck out as disclosing no cause of action, as an abuse of process or on account of obstructive conduct of the claim, where it has been found to have been fundamentally dishonest, or where it has been pursued for the benefit of a third party [CPR 44.15 and 44.16]’. 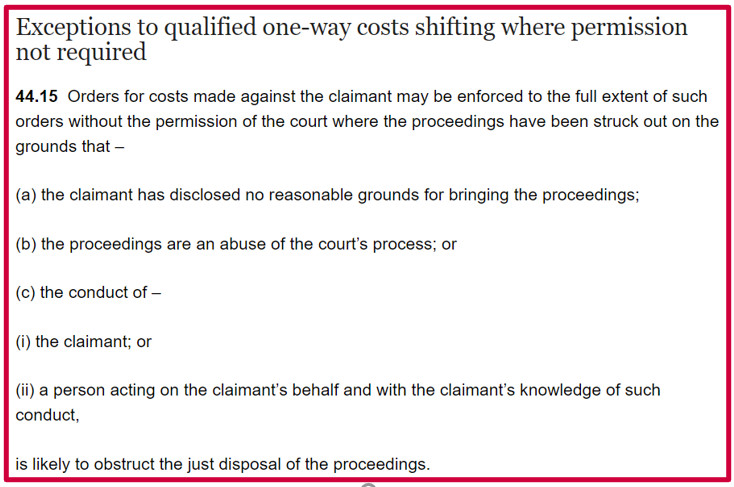 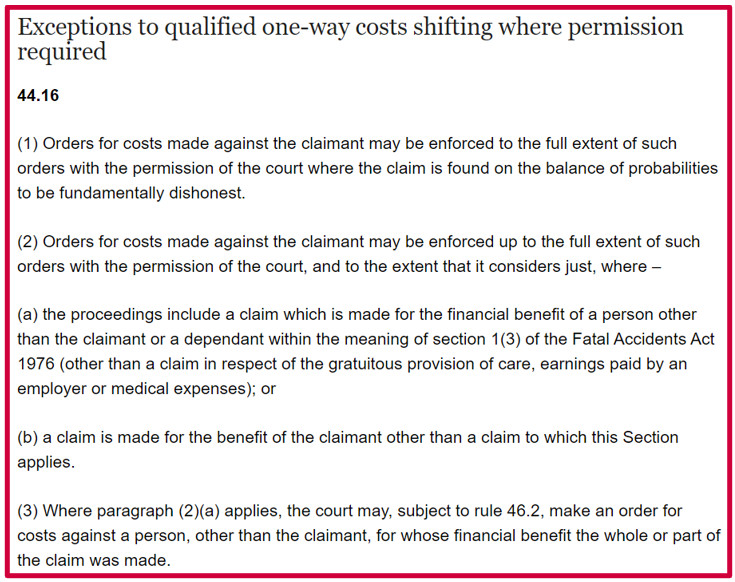 What of CPR 44.12, then, which enables one set of costs to be set-off against another, with the permission of the court? Does this have teeth in a QOCS claim, where damages are assessed at nil?

This question arose in the Court of Appeal’s ruling in Ho v Adelekun [2020] EWCA Civ 517, summarised in edition 305 of BC Disease News (here).

The facts of the case surrounded a road-traffic accident (RTA) claim, which was settled by acceptance of the defendant’s Part 36 offer of £30,000 (plus costs) and enforced by way of a Tomlin order.

Disagreement ensued over the basis upon which the claimant’s costs in the proceedings should be assessed, in accordance with CPR 36.13.

In Ho v Adelekun [2019] EWCA Civ 1988, the claimant’s conventional calculation of costs on the standard basis, at £42,000, was rejected, with the Court instead preferring the defendant’s fixed recoverable costs approach (under CPR 45 Section IIIA), amounting to just over £16,700. As a result, the defendant was awarded their costs of the application (£48,600).

Last year, the Court of Appeal acknowledged the ‘striking’ fact that CPR 44.14, ‘expressly permits enforcement of a costs order in the defendant's favour against damages awarded to the claimant, but says nothing about setting off the costs orders against each other. Equally striking is the fact that CPR 44.14(1) is expressly made subject to CPR 44.15 and CPR 44.16, but not to CPR 44.12 which deals with set-off of costs’.

However, the judges deemed themselves bound to follow Howe v Motor Insurers’ Bureau (No 2) [2017] EWCA Civ 2523 [see edition 304 (here)], which provided authority for the position that set-off against costs is still available in QOCS-protected actions because ‘set-off is not a species of enforcement’.

This conclusion was reached in spite of both Newey LJ and Males LJ acknowledging the claimant’s ‘powerful case … for calling into question the decision in Howe’: 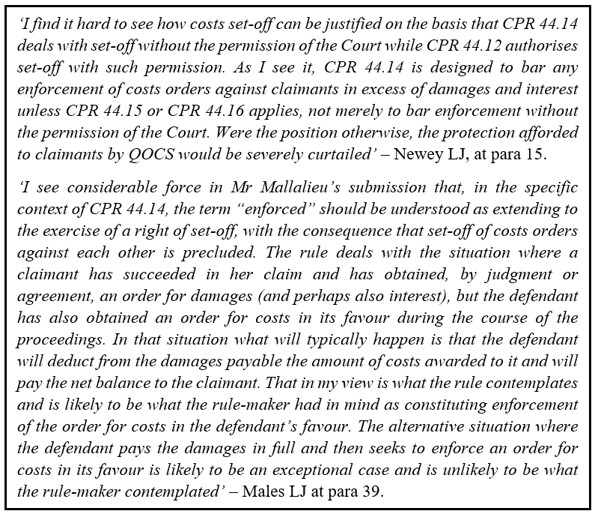 Incidentally, when the matter reached Supreme Court, this year, Lord Briggs and Lady Rose remarked that doubt cast over the decision in Howe in the court below was in fact well-placed and allowed the appeal.

They considered that the issue at hand was one of ‘construction of the language of the QOCS provisions in the CPR set in their context’ and it was not ‘necessary or appropriate’ to discuss ‘policy considerations’ in any detail.

Contextually, CPR 44.14(1) is not a ‘complete costs code’, but its purpose is to operate as a ‘complete code’ so that defendants with costs orders obtained against claimants in PI claims, where QOCS applies, ought to understand how those orders can be enforced.

It was interpreted that, for the purposes of costs enforcement formulae, comparator ‘A’ could not be said to mean the ‘net amount’ of costs orders payable to the defendant (i.e. costs post-set-off), but the ‘gross amount’ instead. The default position is therefore a literal construction of CPR 44.14(1) (the defendant’s order for costs minus the claimant’s order for damages and interest).

However, the Court also found that QOCS does not ‘wholly exclude set-off of costs against costs’, under CPR 44.12, ‘provided that there is an order for damages or interest and that the headroom provided by that order has not been exhausted by other means of enforcement’.

In this way, set-off must be a form of enforcement, whether against damages and interest or against costs.

Of course, in the case of Ho, there could be no part-satisfaction of the defendant’s entitlement against the claimant for their costs by any means, as there were no court-ordered damages to offset against.

The Supreme Court Justices held that the conclusion reached stemmed from the ‘true construction of the wording used in Part 44’. In the same breath, they recognised that such a conclusion could lead to ‘results that at first blush look counterintuitive and unfair’ and ‘appear anomalous’:

‘Why should a defendant which has a substantial costs order in his favour have to pay out costs to a claimant under an order made against him when the two costs orders would net off against each other, leaving both sides to meet their own solicitor’s costs themselves?’

However, some reassurance was taken from the fact that ‘no one has claimed that the QOCS scheme is perfect’ and it was posited that the QOCS in its current form offers the ‘best solution’ for claimant solicitors and defendant insurers.

Having analysed the Supreme Court’s judgment at length, we summarise the reasoned mechanical workings of the CPR provisions like so:

At times, the ruling presents a disorderly narrative, with its frequent use of complicated double negatives, persistent conflation of technical terms (‘set-off’ and ‘enforcement’) and inclusion of questionable typographical errors. It was obvious that Lady Rose, in particular, was displeased that the issue was to be unpackaged by members of the judiciary, beckoning the Civil Procedure Rule Committee (CPRC) to bring ultimate transparency:

‘We should say at the outset that we doubt the appropriateness of a procedural question of this kind being referred to this court for determination. The very fact that two eminently constituted Courts of Appeal have differed profoundly over the interpretation of a provision of the CPR suggests that there must be an ambiguity which practitioners need to have sorted out. The CPRC exists for the purpose of keeping the CPR under constant review. It is better constituted and equipped than is this court to put right such ambiguities, all the more so where, as here, the outcome is suggested by both parties and by the Association of Personal Injury Lawyers (“APIL”), intervening, to have potentially profound policy consequences for the maintenance of a reasonably fair and level playing field in PI litigation, something which this court is much less well equipped than is the CPRC to assess. Nonetheless, permission having been given, this court must decide the question of construction, leaving it to the CPRC to consider whether our interpretation best reflects the purposes of QOCS and the Overriding Objective, and to amend the relevant rule if, in their view, it does not.

If the true construction of the QOCS scheme set out in Section II of CPR Part 44 has adverse policy consequences, that is a matter for the CPRC to put right’.

Legal Futures and the Law Gazette labelled Ho a ‘significant win’  for claimants.[i] The claimant’s legal representative, Sam Hayman (of Bolt Burdon Kemp), was delighted with the unanimous closure of  a ‘back door’ to QOCS protection.

‘There are two particularly alarming things for PI defendants, insurers and compensators in the decision. The first is the approach to the construction of the CPR. The second is likely effect on litigation and the costs of defending claims. The decision means, essentially, unless there is an order for damages or a finding of fundamental dishonesty, a claimant will not have to pay a successful defendant’s costs. Reaching the decision by focusing only on the words of the QOCS rules and not wider usages in the CPR will make the outcome of future cases about the CPR harder to predict.

Concerningly, it paves the way for claimants pursuing bad points – as the claimant had originally done in Adelekun – forcing defendants to incur costs the claimant will not have to pay, perhaps thereby applying improper pressure to settle. An urgent review of the QOCS rules by the CPRC is required to ensure the intended checks and balances operate’.

We will continue to monitor Committee minutes for supplementary discourse and future resolution.