On 17 September 2021, the World Health Organisation (WHO) and the International Labour Organisation (ILO) jointly published their estimates of the work-related burden of disease and injury, between 2000 and 2016.[i]

Producing these estimates is said to create a valuable basis for scoping, identifying, tracking, prioritizing, planning, costing, implementing and evaluating effective policies and interventive practices that will hopefully give rise to safer workplaces, thus improving worker population health and health equity at country, regional and global levels, across sectors.

The Global Monitoring Report is the ‘first fruit’ of the collaboration between the two multinational organisations, following the 2019 Collaboration Agreement to deliver occupational health statistics on a regular basis.

Using a single, unified methodology, it was approximated that in 2016, across 183 countries, there were 1.88 million deaths and 89.72 million disability-adjusted life years (DALYs) attributable to 41 pairs of occupational risk factors and health outcomes.

It is conceded that the ultimate work-related disease burden is likely to be substantially larger, as health consequences from various occupational risk factors are still yet to be  quantified, e.g. deaths from COVID-19 infection. Nonetheless, the Report serves as a useful starting point. 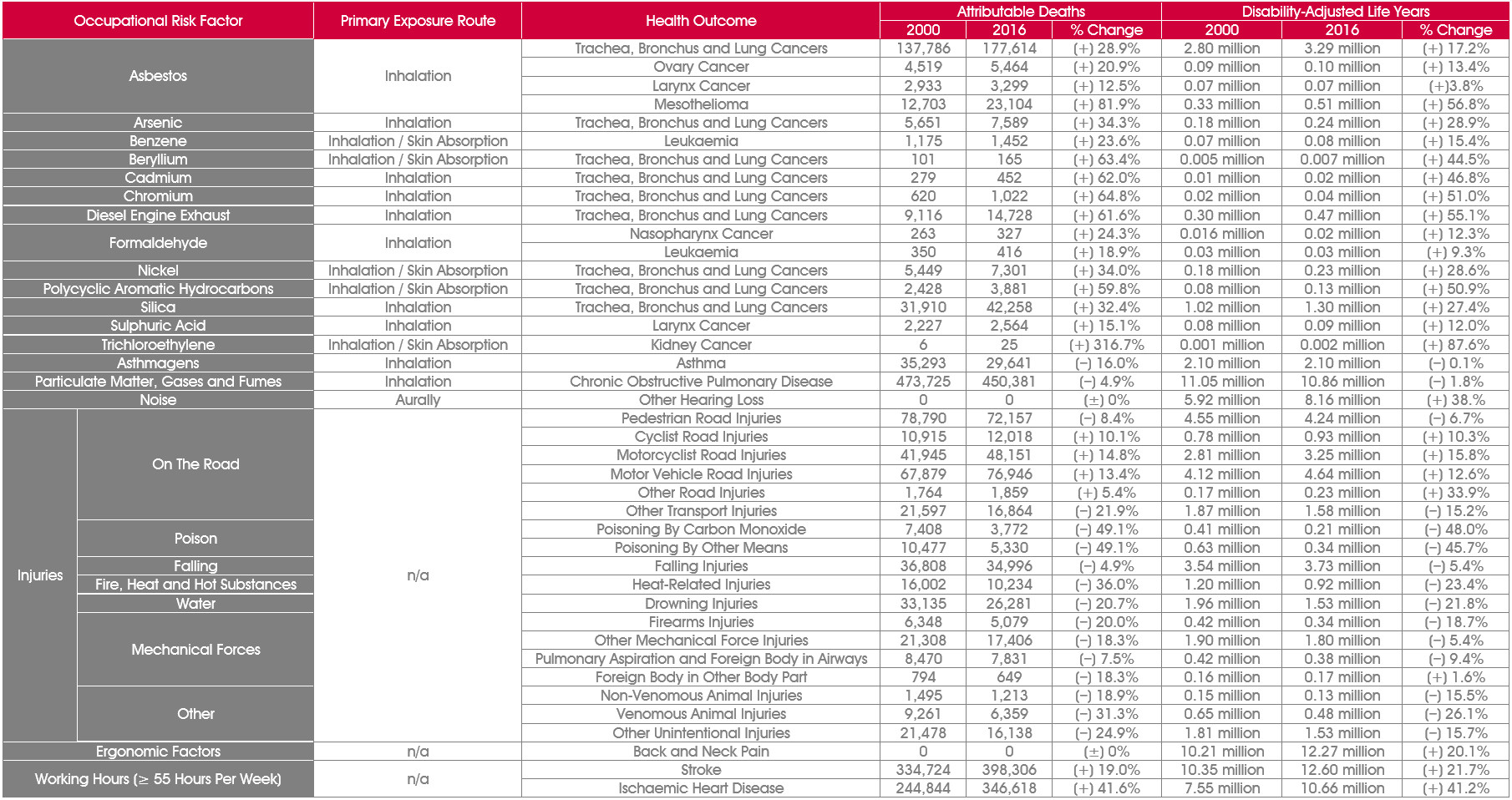 The occupational risk factor responsible for the largest number of attributable deaths was long working hours (≥ 55 hours per week) (744,924), followed by exposure to occupational particulate matter, gases and fumes (air pollution) (450,381) and occupational injuries (363,283). The 1st and 3rd risk factors led to the most DALYs, along with occupational ergonomic factors.

In absolute terms, there were 177,914 more work-related deaths in 2016 than in 2000. Although occupational injuries contributed towards a large reduction in global deaths (32,591), this was offset by a dramatic increase in deaths owing to long working hours (165,356) – a relatively new, psychosocial risk factor. Incidentally, we previewed this discovery in edition 329 of BC Disease News (here). Observed trends equally affected work-related DALYs, which increased by 9.67 million from 2000 to 2016.

One occupational health risk to potentially keep a closer eye on moving forwards is kidney cancer caused by exposure to trichloroethylene, as this boasted the largest relative increases in rates of death (223.8%) and DALYs (45.8%) among working-age populations, between 2000 and 2016. The fact that in absolute terms, there was only an increase of 19 global deaths (0.0003 deaths per 100,000) could mean that, if one were to proceed heedlessly, a latent health outcome that has only recently emerged might slip under the radar.