It is a common musculoskeletal disorder of the upper extremities between the ages of 35 and 54, affecting both sexes.

Thought to be caused by cumulative overuse or overloading of the muscles and tendons responsible for extending, straightening and stabilising the wrists and fingers, this repetitive strain injury (RSI) is also believed to be exacerbated by rotation, gripping and grasping activities. However, the aetiology and pathophysiology of lateral epicondylitis is still poorly understood, even to this day.[ii]

Diagnosis of lateral epicondylitis is typically characterised by inflammation of the Extensor Carpi Radialis Brevis (ECRB) tendon / the common extensor tendon and in more serious cases, the onset of degenerative tendinopathy, whereby microscopic tears of the tendon start to form. If mechanical forces render the weakened tendon unable to self-repair, then its structure, composition and mechanical properties may change, in a process called mechano-transduction.[iii]

Severity and duration of the condition is wide-ranging, but the average duration of a typical episode can last from 6 to 24 months, with around 90% of patients reporting recovery within 1 year.[iv] 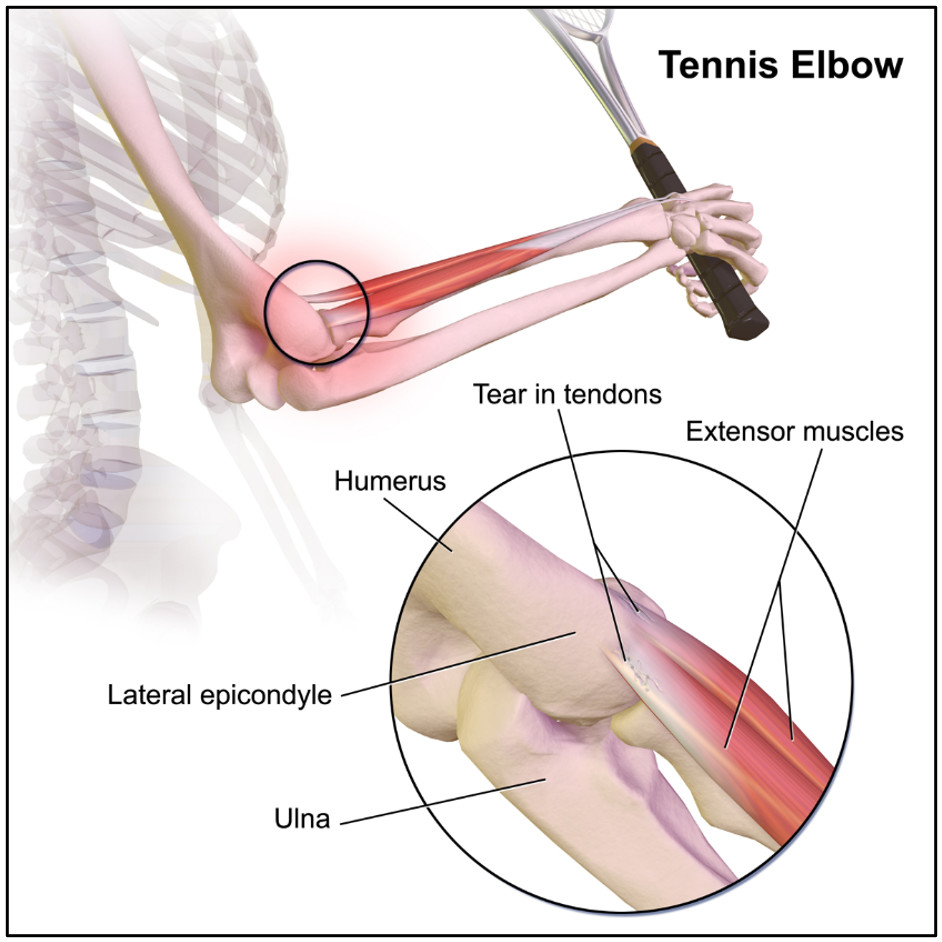 Towards the tail end of last year, the Administrative Appeals Tribunal of Australia held Comcare liable for compensation, pursuant to the Safety, Rehabilitation and Compensation Act (SRC Act) 1988 – a scheme covering workplace injuries and diseases developed by Australian Government and Australian Capital Territory Government employees – after a worker at the Tasmanian Department of Human Services developed ‘lateral epicondylitis of the right arm’.

The Tribunal found that the worker’s use of a computer mouse, when carrying out data entry tasks in the course of her employment, ‘significantly contributed’ towards the injury – the legal threshold entitling the claimant to compensation.[v]

Initially, in 2018, the claim was unsuccessful, but on appeal, in Mansfield and Comcare (Compensation) [2020] AATA 3917, the Tribunal overturned the original decision, with Deputy President Greg Melick AO SC submitting written reasons, on 6 October 2020.

The claimant’s workplace ergonomic assessment revealed that clicking and navigating with a computer mouse ‘constituted 67-100% of her total work time, 40 to 60 minutes in the hour or one lift every 15 seconds’.

Occupational Physician, Dr. Andrew Porteous, presented the claimant’s ultrasound scan, which was diagnostic of lateral epicondylitis, as it showed a full centimetre tear in the elbow tendon. However, he was not convinced that the claimant’s employment was responsible for this condition, instead attributing damage to ‘pre-existing constitutional factors’, namely an ‘age-related degenerative change’:

‘… this condition became symptomatic when she just happened to be at work. In my opinion, it is independent of work activities she was doing’.

In support of his expert opinion, he cited a National Institute for Occupational Safety and Health (NIOSH) study, published in 1997.[vi] Though conceding that this ‘quite old’ (but still ‘relevant’) study did not expressly conclude that there was no relationship between computer mouse work and lateral epicondylitis, the key omission in what was an ‘extensive’ paper on epicondylitis and elbow injuries (92,576 injuries in total) reinforced his epidemiological understanding that there was no evidence of an increased risk, nor evidence of a causative relationship.

Assessing the experts’ opinions in the round, the Tribunal found that there had been ‘significant advances in computer technology’ since the NIOSH study and that, whilst the NIOSH study did indeed state that there was no evidence of any connection between data processing work and lateral epicondylitis, the Tribunal acknowledged that it said nothing about any specific connection with computer mouse work.

Whereas, a more recent 2012 study, conducted by the Swedish Council on Health Technology Assessment, offered constructive evidence to suggest a ‘significant relationship’ between elbow pain and long-term computer mouse usage, according to the Tribunal.[vii] Dr. Porteous’ primary criticism, that this study predominantly centred on subjective (and therefore prone to bias) self-reported data, did not undermine its observation.

Similar findings were posited in a 2012 report, compiled by the Health Council of the Netherlands.[viii] Deputy President Melick was satisfied that epicondylitis fell under the definition of ‘hand/arm complaints’ and that, compared to a baseline of no computer mouse use:

The Dutch report had been informed by an ‘extensive’ body of literature with differing outcomes, including:

In summary, the Tribunal was not satisfied that there was sufficient evidence to justify that the claimant’s lateral epicondylitis was constitutional, not least because Dr. Porteous’ position was guided by an ‘assumption’ that there was no other cause.

Legal practitioners have, in the wake of this decision, highlighted ‘the importance for employers to ensure they have strong evidence to refute any causative link between lateral epicondylitis and repetitive activities’.

Such refutative evidence may come from a raft of publications that were not discussed in the Australian Tribunal hearing.

For example, in 2008, the UK Government (the Ministry of Defence) published a ‘Synopsis of Causation on Lateral Epicondylitis of the Elbow’, which determined that:

‘No association has been demonstrated between epicondylitis and work with visual display units or use of a computer mouse’.[xv]

Dr. Merrill J Mirman (DO), in 1992, was the first clinician to document increasing numbers of patients with ‘mouse elbow’, which was essentially a diagnosis of lateral epicondylitis (‘myofascial pain syndrome of the Extensor Carpi Radialis Brevis’). This came at a time when RSI in typists had been branded an ‘epidemic’ ­– see Alexander & Ors v Midland Bank Plc [1999] EWCA Civ 1918.

Ultimately, though, the hype was never fully realised and rare RSI claims, commenced by office workers in modern times, are generally staunchly defended. We will therefore monitor the impact of causation arguments, submitted in Mansfield, with great interest.

If lateral epicondylitis can be caused by repetitive use of a computer mouse, then display screen equipment (DSE) assessments, under The Health and Safety (Display Screen Equipment) Regulations 1992, may play an increasingly important role in dispelling breach.

Encouraging good working posture (having forearm support, smooth movements when using mouse or keyboard, relaxed shoulders, etc.) has been shown to reduce muscular loading of the forearm extensor muscles,[xvii] while OH specialists have been known to recommend the purchase of vertical mice with side-functioning keys and voice-activated software, in order to overcome standard mouse use as an ‘exacerbating factor’ of lateral epicondylitis.[xviii]

[viii] Committee on the Identification of Workplace Risks: A Health Council of the Netherlands Committee, ‘Computer use at work’ (20 December 2012 Health Council of the Netherlands) <https://www.healthcouncil.nl/binaries/healthcouncil/documents/advisory-reports/2012/12/20/computer-use-at-work/advisory-report-computer-use-at-work.pdf> accessed 13 January 2021.