When bringing Ministry of Justice (MoJ) portal claims under the relevant Pre-Action Protocol (PAP), i.e. the PAP for Low Value Personal Injury Claims in Road Traffic Accidents (RTA) or the PAP for Low Value Personal Injury (Employers’ Liability and Public liability) Claims, it is common for claimants, who are yet to complete Stage 2 of the portal procedure (liability admitted with quantum yet to be agreed), to issue Part 8 proceedings and immediately seek a stay of proceedings [Practice Direction (PD) 8B paragraph 16.2], in order to protect their position on limitation. 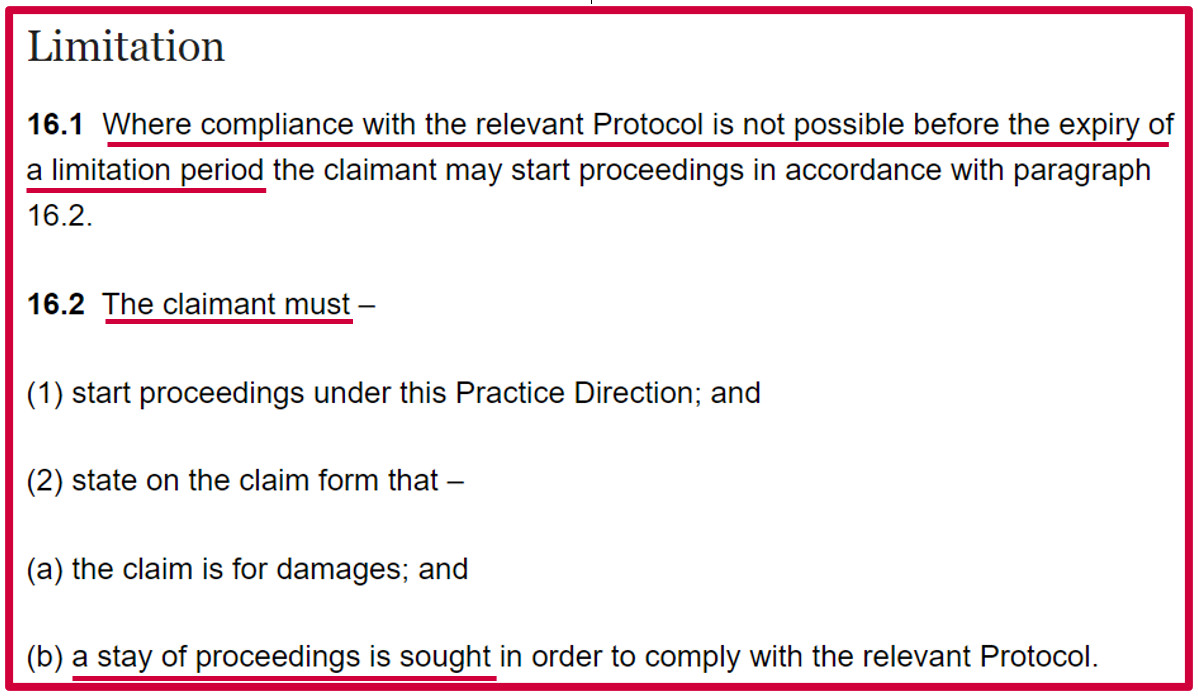 In theory, this allows the claimant to ensure compliance with the PAP by the time that the stay is lifted and the matter is either transferred to Part 7 (no longer continuing as a portal claim) or starts the Stage 3 procedure (hearing in the county court).

In practice, however, it has been argued that the Part 8B stay can be used an abusive instrument by claimants, so that they may obtain more time, e.g. when it is unearthed that a claimant knew long before Part 8 proceedings were issued that its claim was exempt from the PAP.

For instance, in edition 215 of BC Disease News (here), we précised the unreported case of Lyle v Allianz Insurance PLC (2017), wherein a RTA portal claim, initially valued at £10,000, was uncovered as likely to exceed £25,000 on the advice of medical evidence obtained during the course of the stay.

Naturally, when the claimant sought to commence fresh proceedings under Part 7, the defendant attempted to have the order lifting the stay set aside, on the basis that the claimant should have acknowledged from the outset that the claim exceeded the upper limit of the PAP and, by consequence, confiscated the availability of a PD 8B stay.

At Chester County Court,  His Honour Judge Pearce found that, whilst the claimant was entitled to take the view that the value of claim did not exceed the upper limit at the time of issuing Part 8 proceedings, by neglecting to apply to lift the stay until 2-years after a ‘reasonable claimant would have been satisfied that the value of the claim clearly exceeded £10,000’, this fell ‘far outside’ the expectation of the PAP and was ‘not an acceptable way to conduct proceedings’ under the CPR; to all intents and purposes, an abuse of process.

As a result, the stay was not lifted and, with the ‘inevitable consequence’ of this being that proceedings could not proceed, strike out was the ‘appropriate order to bring finality’.

This, too, concerned a RTA portal claim, with Part 8 proceedings having been issued on 25 July 2017 (limitation set to expire in September 2017), in the expectation that the claimant would recover ‘damages in respect of pain, suffering and loss of amenity in excess of £1,000’.

Unlike in Lyle, where the type of stay obtained was a general stay (no expiration date), the stay obtained in Cable was fixed in length and elapsed on 20 August 2018.

2-days before the stay expired, the claimant applied to lift the stay and have the matter proceed as a Part 7 claim – now a £2.2 million claim (this was set out in amended particulars, dated September 2018).

The salient question, therefore, was: at what point did the claimant realise that this was no longer a low-value personal injury claim?

Consultant neurologist, Dr. Kidd, produced 2 reports for the claimant. The 1st report (dated January 2016) noted some aspects of deterioration in the claimant’s condition (e.g. light and high-pitched tinnitus), which should have planted a seed of doubt over the original valuation of the case. The 2nd report (dated January 2017 and amended in November 2017) noted further deterioration and referred to a ‘migraine disorder’, before the claimant’s symptoms became chronic and were described as a ‘severe neurological state’.

Copies of these reports were not served on the defendant’s solicitors until August 2018, but it was assessed that the claimant ‘knew or ought to have known’ that the claim was worth well in excess of £25,000 by July 2017 at the latest, i.e. on or before the Part 8 claim was issued.

When the application fell to be determined by District Judge Campbell, the claimant’s application was declined and the claim was struck out. This ruling was upheld by Circuit Judge, Judge Wood QC,[i] who was persuaded by HHJ Pearce in Lyle, but did not regard himself as bound by the decision:

‘Although there is no clear mechanism provided in the relevant rule or the practice direction as to what should happen if a stay imposed in accordance with 8BPD paragraph 16 is not lifted, the only logical conclusion is that the action cannot proceed by any process. Paragraph 16.7 does not allow Part 7 proceedings to be commenced whilst there is an extant Part 8 claim which has been stayed. Whilst it has been described as being a claim "in limbo" and in so far as it is not disputed that a judge has a discretion in determining whether or not to lift the stay under this paragraph, it seems to me that there must be a power to strike out. In fact this is not really challenged by either counsel. It would be a concomitant part of the process involved, when the judge exercises such a discretion. For this reason it seems to me that a judge is entitled to take into account any question of abuse of process without the need for a formal application to that effect … the judge cannot be criticised for seeking to determine whether or not the claimant's solicitors had abused the process of court as one the relevant factors’.

Lord Justice Coulson, with whom Davies LJ and Lewison LJ agreed, gave lead judgment on appeal to the Court of Appeal – the present appeal.

They found that, as HHJ Pearce did in Lyle, DJ Campbell reached her conclusions in the wrong order. Both judges had erred in paying too much attention to their ‘overall discretionary powers as to whether or not to lift the stay or transfer to Part 7, rather than focussing first on the issue of abuse and then considering the proportionate sanction’, which risked downplaying the impact of bringing the claim to an end:

‘The stay has expired. I have not granted permission to lift that stay and therefore [with the claim form in limbo] the court has no other option but to strike a claim out’ (DJ Campbell, at paragraph 68 of her judgment).

Consequently, when striking out such a claim, the correct approach is (1) to pinpoint whether there is an abuse of process and (2) to evaluate the proportionate sanction for the abuse. This 2-stage test was laid out in Asturion Foundation v Alibrahim [2020] EWCA Civ 32.

By assuming that there had been an abuse of process, DJ Campbell opted to strike out the claim on a prima facie basis, but the Court of Appeal declared that strike out should never be treated as an ‘administrative afterthought’.

Conducting a reassessment of the claimant’s application alongside the 2-stage Asturion test, the Lord Justices of Appeal first identified 3 separate abuses of process (which need not necessarily have amounted to ‘unfairness’ or ‘manifest unfairness’):

Having acknowledged these abuses, Coulson LJ went on to review any ensuing prejudice that the parties had experienced.

It was ultimately determined that the defendant had not suffered any prejudice, beyond the 1-year delay initiated by the PD 8B stay. The claimant’s failure to switch to the PI protocol, the effect of issuing under Part 8 on the limitation period and the defendant’s inability to establish a proper reserve (without proof of specific evidence) were not held to be prejudicial.

By contrast, the prejudice that the claimant could face, should the stay not be lifted and the claim be struck out, was surmised as follows:

‘The appellant was the victim of an accident for which the defendant had long ago admitted liability. His claim was started in good time under the RTA Protocol, and he was not responsible for the catalogue of errors and delays since then. His claim form was issued within the prescribed three years. If that claim was struck out now, he would have to start all over again, this time with a professional negligence claim against his current solicitors, with all the risk and uncertainty, not to say cost, that such a claim would involve. Moreover, that would be a loss of a chance claim, which is inevitably an inferior type of satellite claim, particularly when compared to the present proceedings, which involves a claim against the primary defendant who has already admitted liability’.

Taking all observations into account, strike out was seen to be a disproportionate remedy.

‘I am conscious that … I have come to different views to those of judges with considerable experience of this type of litigation. I am satisfied that that is primarily due to the different arguments and more extensive authorities which were deployed by leading counsel on this appeal. So, for the reasons that I have given, I would allow the appeal; lift the stay; and transfer the case to CPR Part 7. I would order the appellant to pay the respondent's costs on an indemnity basis up to and including the hearing on 17 October 2018, and order that the appellant is disentitled to any interest on his special damages up to 17 October 2018’.